Constructed in 1776 during the height of the American Revolution, Fort Number Four was built by the Continental Army during the New York campaign against the British. The Fort helped protect a bridge that connected Manhattan to the mainland, which was an important location during the campaign. Though George Washington ordered for the Fort to be built, Colonel Rufus Putnam oversaw the project. The Fort was destroyed in 1779 by British soldiers after George Washington was forced out of New York City. A marker for the Fort was set up in 1914 by the Daughters of the Revolution. 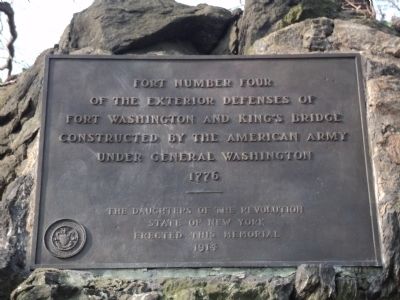 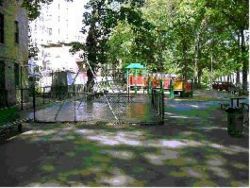 Fort Number Four was built during the Revolutionary War when the fighting was the most intense in New York City. George Washington, General of the Continental Army, ordered the Fort's construction in 1776 because he needed to defend a bridge that connected Manhattan to the mainland. The Fort was constructed as a palisaded earthwork redoubt. In 1777, Colonel Rufus Putnam was put in charge of the Fort. While occupied by the American Army, the Fort was attacked twice by the British. After Washington's Army was forced out of New York, the Fort fell into the hands of the British who destroyed it in 1779.

In 1866, the land that the Fort once sat on was turned into a horse racetrack called the Jerome Park Racetrack. Horseracing in the New York City metropolitan area was put on hold during the Civil War, and this was the first time it returned since the beginning of the War. The Belmont Stakes were held there in 1867, where it was held each subsequent year until 1890 when the Racetrack was closed down.

When the Jerome Park Racetrack was closed down, the city turned the area into the Jerome Park Reservoir. The Reservoir was needed because of the growing population in the city, which made a new aqueduct necessary. First filled in 1905, the Reservoir held the water from the new aqueduct. The land was later given to park services in 1913, with new land added in 1931, and a playground was opened three years later. More improvements were made over the years, and today, the park is enjoyed by the public with playgrounds, benches, and a beautiful outdoor environment.