The Old Exchange Building and Provost located at East Bay and Broad Streets was built originally as the Royal Exchange in 1771. The building completed in 1771, the Exchange and Custom House was the social, cultural center, and economic center of the colony. It is said to be the last public building commissioned by the British in the colonies. The building was made a National Historical Landmark in 1973.

Early Photo of the Old Exchange 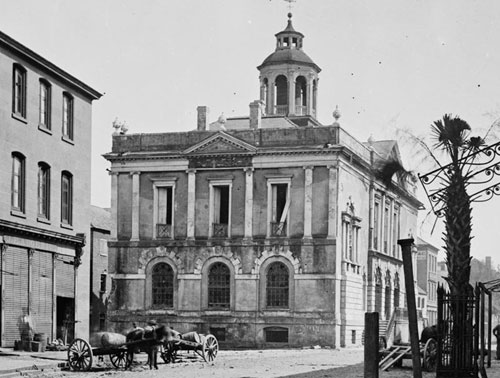 Dungeon in the Old Exchange 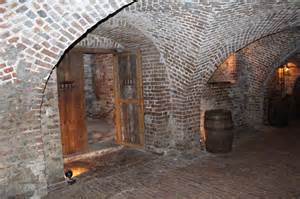 As Charleston became the South's largest port, the Exchange and Custom House was built from 1767 to 1771. This building became necessary due to the growing shipping industry in Charleston. The building also served as a customs house, a post office, public market, meeting place, and a bank. More interestingly it was used by the British as barracks and the basement as a prison during the Revolutionary War.

Before the Exchange building was built the Half Moon Battery existed in its location. At one point the Half Moon Battery imprisoned pirates who were looting the incoming ships, most notably Stede Bonnet who was under the command of Blackbeard. Later on, the Exchange was used to house confiscated tea after the Tea Act protests in 1774. George Washington even held a ball in the Exchange in 1791. After the U.S. Customs House was built in 1879 shipping business was no longer conducted there.

The Exchange house suffered heavy artillery damage at the hands of the Union Army during the Civil War and endured sizable damage during the 1886 Earthquake.

By 1913 the building was given to the Daughters of the American Revolution to be preserved as a historical monument. Many of the rooms are now used as offices and DAR meeting rooms. The basement, however, was revamped as a dungeon for tour groups.  The Old Exchange offers public tours of its three floors that highlight various aspects of Charleston history during the Colonial and Revolutionary eras The building is now a living museum and represents a myriad of historical periods for Charleston from the Revolutionary War to present day. Today, the Exchange house is still owned by the South Carolina Society of the Daughters of American Revolution.