Home to the world’s best motorcycle collection, the museum now has over 1200 vintage and modern motorcycles and racecars and the largest collection of Lotus cars as well as other significant makes. The collection is the largest of its kind in the world. There are approximately 600 of the 1200 motorcycles on display at any given time. These bikes range from 1902 to current-year production. The museum displays common street bikes as well as rare one-off Gran Prix race machinery. 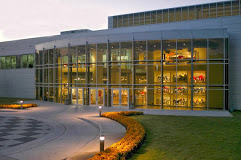 Birmingham, Alabama native George Barber modified, raced and maintained Porsches in the 1960s (63 first-place wins). He started collecting and restoring classic sports cars in 1989, but his interest soon turned to motorcycles. Barber recognized that there was not a museum which reflected the history of motorcycles from a global perspective. He wanted to preserve motorcycle history in the United States in a way that represents an international aspect and to supply an example of motorcycles that until then could only have been seen in books and magazines. This was the theme used in the mission and development of the Barber collection.
The collection grew with the assistance of skilled restorers that worked for Barber at a secluded location in Birmingham that once housed a commercial vehicle refurbishing facility. Out of the same shop a vintage motorcycle race team operated with the challenge of maintaining and racing historically significant machinery. These bikes were routinely campaigned around the United States and Europe so that they could be enjoyed and appreciated in their original setting, rather than collecting dust in a garage. This racing effort brought the Barber Team 7 National Championships in the American Historic Racing Motorcycle Association (AHRMA) and helped secure a credible place for the collection in the community of motorcycle enthusiasts.
In 1994, the Barber collection became the Barber Vintage Motorsports Museum when it was granted a 501(c)3 not for profit status. On March 14, 1995, the museum was officially opened to the public in the original secluded location on Birmingham's Southside. The museum operated here until November 1, 2002. The Museum reopened at its new location at the Barber Motorsports Park on September 19, 2003. Along the way vehicles from the museum’s collection have been featured in exhibits around the world. Twenty one motorcycles were selected for the famed Art of the Motorcycle exhibit at the Guggenheim’s New York and Bilbao, Spain location as well as the Field Museum in Chicago. England’s Goodwood Festival of Speed has featured cars from the Barber collection. Birmingham’s own Museum of Art has conducted a special exhibit featuring motorcycles from the Barber collection.
The collection now has over 1200 vintage and modern motorcycles and as well as a substantial collection of Lotus and other racecars. It is considered the largest collection of its type in North American and possibly the world. There are approximately 600 of the collection’s 1200 motorcycles on display at any given time. These bikes range from 1902 to current-year production. Bikes from 20 countries represent 200 different manufacturers. The common street bike is represented, as well as rare, one-off Gran Prix race machinery. Bikes have been purchased from as far away as Australia, New Zealand, and Sweden, but also as close as down the street.