“Jonathan B. Turner, Father of the Federal Land Grant University Plan and Anti-Slavery Speaker. Site of his home, 1805-1899”

North side of the 1000 block of West College Ave. 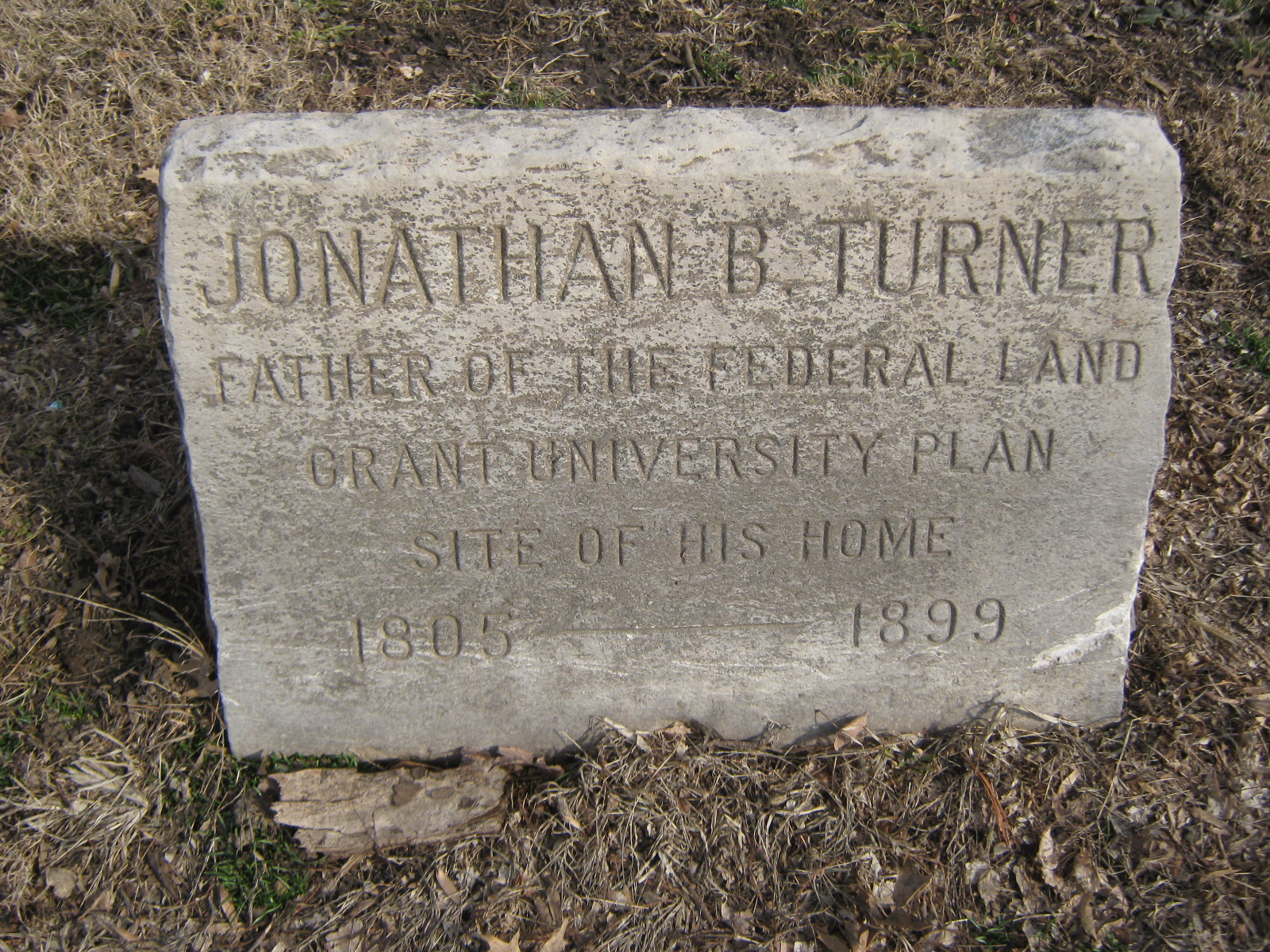 Jonathan Baldwin Turner (December 7, 1805 – January 10, 1899) Born in Templeton, Massachusetts, Turner was a classical scholar, botanist, dedicated Christian, and political activist. He was perhaps the leading voice in the social movement of the 1850s that produced the land grant universities that pioneered public higher education in the United States. Turner was especially involved in establishing the University of Illinois.

Turner was a student of classical literature at Yale University and an aspiring missionary who, upon graduating in 1833, set out to the wilds of Illinois. In 1833, Turner became a professor at the newly organized Illinois College at Jacksonville, Illinois, where Turner encountered Pottawatomie Indians, and witnessed terrible outbreaks of cholera. At Jacksonville, Turner soon found himself involved in the question of slavery, becoming the editor of a Jacksonville abolitionist paper, an assistant with the Underground Railroad, and, in the classroom, a vocal opponent of slavery.While a professor at Illinois College, Turner began to search for a plant that might serve as a hedge to help divide and cultivate expanses of open prairie. In the later 1830s Turner selected the Maclura pomifera (the Osage orange) as an ideal plant for this purpose, and patented a machine for preparing the soil and planting these seeds. Turner advertised and sold Osage Orange seeds, which were widely used as hedges before the development of barbed wire between 1867 and 1874. His religious views the subject of an investigation by the Illinois Presbyterian Synod, and his abolitionism a subject of growing controversy, Turner in 1848 resigned from his teaching post as chair of belles lettres and literature at Illinois College. After his departure, Turner expanded his agricultural research and created the Illinois Industrial League to advocate for a publicly funded system to provide "industrial" education, suited for the needs of the working ("industrial") classes. 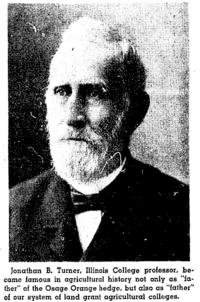 Jonathan Turner in the Prairie Farmer newspaper[1]
ReferencesTurner faced stiff opposition from traditional colleges, as well as from those opposed to non-sectarian education. In 1853, his farm was burned to the ground. But Turner (who was deeply religious, although not orthodox) pressed hard, and generated considerable enthusiasm for his model of education. In 1862, the Morrill Land-Grant Colleges Act was passed, which, after the American Civil War, brought Turner's ideas to fruition in the public Land Grant Universities of the United States. The precise importance of Turner's contribution to the establishment of the land grant university has been the subject of some dispute. Senator Justin Morrill was reluctant to credit Turner as the primary author of the movement, and some have argued that Morrill's contribution, as sponsoring senator, was more important. In fact, both the rabble-rousing populism of Turner and the more reserved statesmanship of the Senator Morrill were necessary for the passage of the act that bears Morrill's name.

Turner was displeased with the political process that saw the University of Illinois (or "Illinois Industrial University," as it was originally named) located in Urbana, Illinois, far from the industrial workers of Chicago. Turner spoke at the laying of the University's cornerstone, and his words: "Industrial education prepares the way for a millennium of labor." remain in stone above the University's main quadrangle. In his later years, Turner devoted his energy to other causes. He became a strident opponent of corporations, and an advocate of the rights of the mentally ill, who suffered under terrible conditions in the asylums of the nineteenth-century. He also wrote religious tracts championing the liberal teachings of Christ, and criticizing Catholicism, Mormonism, and traditional religious institutions generally.Turner died at the age of 93, and is buried in Diamond Grove Cemetery in Jacksonville, Illinois. Jonathan Baldwin Turner Hall at the University of Illinois at Urbana–Champaign, Turner Hall at Illinois College, and Jonathan Turner Junior High School in Jacksonville are named in Turner's honor. Turner's papers are held by the Illinois History and Lincoln Collections of the University of Illinois Library at Urbana-Champaign.

When it comes to the anti-slavery movement, Johnathan Turner believed in the power of the word.  He was an scholar, botanist, Christian, and political activist, writer, and newspaper owner. He also created the Land Grant Universities that pioneered public higher education. Born in 1805 in Worcester County, Massachusetts, who attended Yale college. Once he graduate he came to Illinois College in 1833 to teach. While at Jacksonville, he became involved with the slavery question, and  in 1843-44 he was the editor and owner of the Illinois Statesmen, a local anti-slavery newspaper. He did not permit advertisements of runaway slaves, but did publish Black weddings. After a while he stopped teaching at Illinois College in 1848 and devoted more time to agricultural research on the Osage Orange as in ideal boarder plant for farmers. The Osage was used before the invention of the Barb Wire.

Although Johnathan Turner was not part of the Congregational Church,  he became involved with the works of the Congregational church's anti-slavery movement. Turner did talk about the one single event in helping some runaways in December of 1846 . That event was told in the Dr. Azle D. Pierson biography with in this book. Turner believed that the only way to fight slavery was through writing and challenging the enforcement of the laws.   Three years before his death, he wrote a letter to Wilbur Siebert about his thoughts on the slave question.

“I could never find an excuse for doing all my thinking through other people's minds or for selling myself out to service for any state or church, sector creed. Other than that of our one and only proclaim and commanded Christ word in our own free American Republic.  Based wholly upon it. Both of which I understand them pledge and bind every man of us to grant all mankind equal rights, privileges, and duties according to there's several abilities and deserts before God and the law and to require of them only to do by all others as they would be done. By if this is not the entire whole of both law and gospel all the earth, and all the heavens above earth, I never knew, and never heard, or believe anything intelligible about it and have never been born into any fixed belief on the subject. But if this is the substantial truth of the whole matter, that I am and always have been a native born abolitionist. Though I never signed any sort of church creed, sold myself out to any sort of religious or abolition society, took no interesting running slaves off to Canada, because they were not needed there, but needed here to help us face the music around here. Besides to do or say anything behind one's back was distasteful to me”.

Turner was one of the few professors who spoke out against slaver at Illinois College.  He passed away at the age of 93 and is buried at Diamond Grove Cemetery in Jacksonville.