Conceived in the early 1920s, the Textile Center was the project of Florence C. Casler, a pioneering female real estate developer and contractor, who constructed it to manufacture garments. It was designed by architect William Douglas Lee in a Gothic Revival style. The building was completed in 1926 and the grand opening included a fashion show featuring locally made clothing. Within a year of being built, the Textile Center was at full capacity with 56 tenants, all in the wholesale garment industry. The building was sold in 1945 for $450,000 and was turned into condominiums in 2005 .

A black and white shot of the Textile Building. 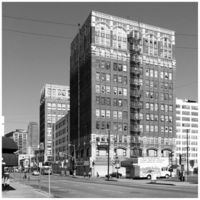 A black and white photo of Florence Casler. 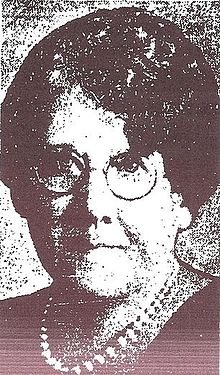 The Textile Center Building was developed by Florence C. Casler, a pioneering female real estate developer and contractor. A Canadian by birth, Casler married a man from Buffalo who owned his own plumbing business. After having two daughters, her husband headed off to try and make his fortune in the gold rush, but returned later with only $700. During her husband's absence, Casler had acquired her own plumbing license and started her own business.

After her husband died in 1921, Casier moved to Los Angeles where she became a builder and developer, creating the real estate company, Lloyd and Casler Inc. in 1923. The Textile Building was one of her biggest developments, making its way on to the National Register of Historic Places.

Other buildings developed by Casler include the Allied Crafts Building, the Mac Printing Co. Building, the Bendix Building and the Garment Capitol Building. By 1931, Casler had eight Class A limit-height buildings to her credit, sixty flat buildings and a vast vision of the future of Los Angeles.

In 2008, the Los Angeles Cultural Heritage Commission recognized Casler as one of the first women in the early 20th century to head a company in the field of development and construction of high-rise buildings. She was also appointed as the head of Peoples Bank of Los Angeles, making her the only female director of a bank in Los Angeles.