Originally founded in 1881 as the People's Store, this retail outlet grew to become A. Hamburger and Sons and eventually Hamburger's Department Store. In 1923 the company changed hands and opened as the May Company. The May Department Store was operated at this location until 1989 when May Department Stores dissolved Goldwater's, based in Scottsdale, Arizona, and transferred its Las Vegas, Nevada store to May Company California.

A shot of the store as it stands today. 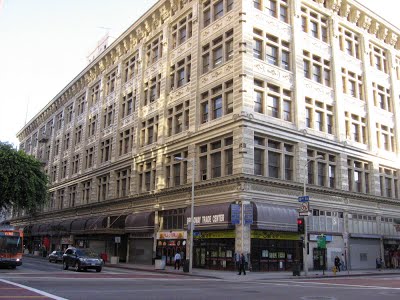 A Black and white view looking north towards 8th Street with Hamburger's on the right hand side. 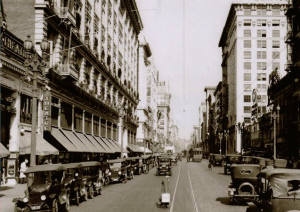 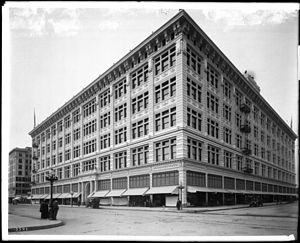 The May Company in California can trace its roots back to the store that Asher Hamburger and his sons Moses, David and Solomon established in Los Angeles after moving from Sacramento. This store first opened on October 29, 1881, and was known as the People's Store. In a short time, the store expanded into adjacent storefronts and within three years the store had moved to a larger location on Spring Street.

By the start of the 20th century, A. Hamburger & Sons had even outgrown the Spring Street location, which had 520 employees working on five floors. The Hamburger family decided to build a much larger store at the southeast corner of Broadway and Eighth, a location that was outside of then current retail district. Construction started in 1905 with a grand opening held in 1908. This location was known as the Great White Store and was the largest department store building west of Chicago at the time.

The store contained many amenities including: one off the first escalators on the West Coast, several restaurants, a drug store, grocery store, bakery, fruit store, meat market, U.S. post office, telegraph office, barber shop, a dentist, a chiropractor, a medical doctor, an auditorium, an electricity and steam power plant in the basement that was large enough to support a city of 50,000 inhabitants, a private volunteer 120 men fire brigade, 13 acres of retail space (482,475 sq.ft., larger than all the department, clothing and dry goods stores in the city), and 1200 employees.

In 1925, the Hamburgers sold their store to the May family of St. Louis for $8.5 million. Thomas and Wilbur May, sons of the founder of the May Company, were sent to manage the former Hamburger store. One of the first things that they did was to expand the store again by building adjacent additions on the other parts of the city block. After several more years, the May Company store eventually occupied almost the entire block between Broadway and Hill and between 8th and 9th Streets.

The original downtown flagship store was closed in 1986 and replaced by a smaller store at Seventh Market Place. Despite this, other branch stores continued to open up throughout the late 80s and 90s. Although some of the underperforming stores had to be closed down.

In 2014, Waterbridge Capital, a New York-based real estate development and investment group helmed by Joel Schreiber, acquired the former Hamburger Department Store on Eighth Street and Broadway for about $130 million. They plan to turn the building into a creative campus in order to attract tech companies to rent out office space.