A Black and white shot of the building's exterior. 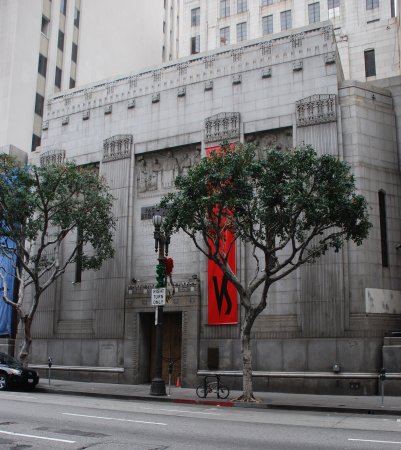 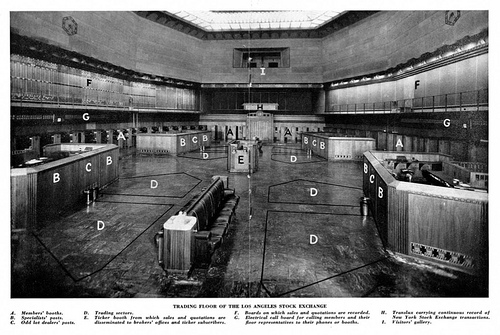 A Black and white shot of the inside of the building. 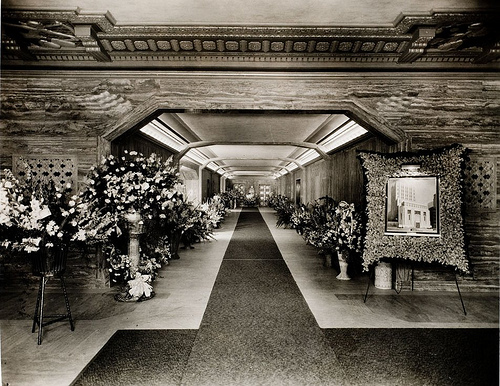 Located at 618 Spring Street, the building was designed to tower over the surrounding area with its imposing 53 feet granite facade and the largest bronze doors in the area. The interior of the building housed three bas-reliefs, designed by Salvatore Cartaino Scarpitta, entitled, Research and Discovery, Production, and Finance. The aim of the works was to highlight the stock exchange business' societal benefit through the use of symbols like the bear and the bull, reflecting rise and fall of the markets.

The rest of the interior was designed by Julian Ellsworth Garnsey in a Native American and Near Eastern style. The trading floor held 64 booths and had a balcony under a 40 feet ceiling decorated with sculptured figures. Each of the sculptures represents something different, such as equality, permanence, speed, and accuracy. It was built with an auditorium, lecture room, and statistics department, as well as offices a library, a club, a billiard room, reading rooms, and a card room.

The Exchange building opened in 1931 but merged into the Pacific Coast Stock Exchange in 1956, becoming the largest regional stock exchange west of the Mississippi. The Exchange moved to a different building in 1986, and in 1988, the Stock Exchange building was sold to the Empire Group for $2 million to be turned into a nightclub. By 2006, PAX America had bought the building and renovated it for about $5 million, creating the nightclub ExchangeLA, which opened in 2010. Sadly, PAX America defaulted on settlements to reimburse ExchangeLA for the cost of mandated improvements, forcing to the company to file for bankruptcy in 2013.