Originally constructed and operated as the Colonial Flag Company, this manufacturing facility is now operated by Annin Flagmakers and produces American flags, bunting, and other patriotic American products. The Annin company dates back to the early 19th century when Alexander Annin produced sails and flags for ships in New York City. 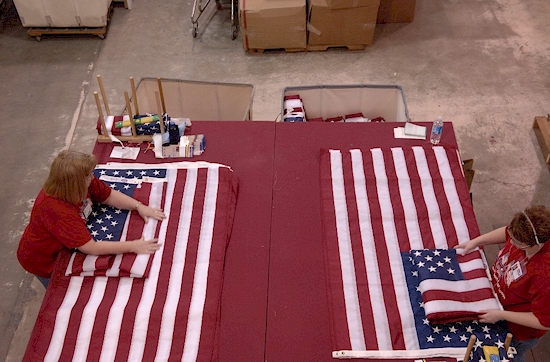 Aspiring flagmakers Benjamin and Edward Annin founded their business in 1847 on New York's bustling Fulton Street with the help of their father, Alexander Annin. Their father had experience in the flag-making business, having designed flags and producing them along with sails for numerous merchant ships on the New York City waterfront since 1820.

Bolstered by sales during the Civil War, the company prospered in its early decades. The company was able to use new technologies to reduce costs in subsequent decades. Demand for U.S. flags boomed once again in 1898 and in 1917 as the nation entered World War I. e company responded to increased demand by constructing a new manufacturing plant in New Jersey in the early 1900s. Thanks to mechanized die-cutters, the company was able to automate some of the more labor-intensive aspects of the flag-making process such as the production of stars.

After over a century of business, the company purchased several of their competitors including the former factory operated at this location by the Colonial Flag Company in 1975. This allowed Annin to take charge of this facility in Coshocton and expand production.