Unique among indoor arenas, the Tacoma Dome features a network of wooden beams the form the structure of its roof. Constructed of the stadium was complete in 1983 and the arena is owned by the city of Tacoma. 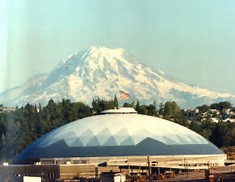 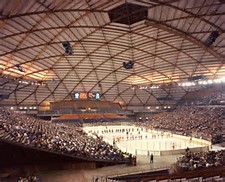 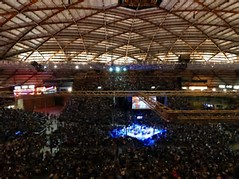 The Tacoma Dome has the capacity to seat 23,000 and is the largest wooden dome in the world. The interior of the arena is also unique, as it includes little fixed seating in order to remain flexible enough to adapt to different types of concerts, athletic contests, and events. The dome’s roof was built with 1.6 million feet of wooden boards and 4,541,382 cubic feet of concrete.

The arena has hosted basketball games featuring teams from the NBA and NCAA, exhibition games for NHL teams, and has also been the home stadium of teams in the West Coast Hockey League and professional indoor soccer. The Tacoma Dome has also hosted gymnastics and tennis, professional wrestling, rodeo competitions. In addition to the wide variety of athletic events that have occurred at the arena, it has also held hundreds of concerts, religious and political meetings, and community events.

A concert by David Bowie was the first event held at the dome on August 11, 1983. Billy Graham hosted a series of meetings at the arena that same year that averaged 30,000 spectators each night. In 1984, the dome was also gaining some notoriety for its display of controversial neon art, which eventually morphed into a fairly intense debate over public funding of art for public works projects.

The Tacoma Dome’s unique design has made it a symbol for the city. In 2016, the City of Tacoma committed over $21 million to support the renovation of the area. Telescopic seating, additional and improved restrooms, new dressing rooms, and various features that should improve the appearance and security of the building are also part f the renovation project that is scheduled to be completed by the fall of 2018.