The oldest remaining frontier-style structure in the Pearl River Valley, this historic home was built by Reverend John Ford. Ford was a pioneer settler who became a legislator and member of the state's Constitution Writing Committee. Guests have included Andrew Jackson and Bishop William McKandree. Sam Dale Pearl River Convention took place here in 1816. The Methodists Conferences of 1814 and 1818 were held here. Payne's Chapel Church on grounds. Andrew Jackson stayed here on his way to fight the battle of New Orleans in 1814. The Reverend only consented to Jackson's presence because the uncouth and hard-drinking future President was on his best behavior and convinced Ford of his desire to protect the frontier from a potential British invasion. 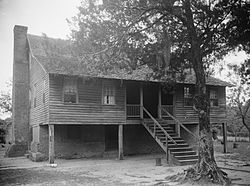 This frontier home in the southern part of Marion County is named for its first inhabitant, Methodist minister Reverend John Ford. Believed to be built before 1800, the home was known as “John Ford’s Fort” during the early years of frontier settlement. It served as a way station for troops during the War of 1812 and the Creek War.

The John Ford Home was also the site of the Pearl River Convention and Methodist Conventions of the Mississippi Territory in the early 1800’s. In November 1812, General Andrew Jackson stayed at the Ford Home while en route to the Battle of New Orleans. During the Civil War, the home was raided by Union soldiers and housed General John Davidson and his staff on the night of Dec 3, 1864 as they made their way across Mississippi. Since 1962, the home has been owned and managed by the Marion County Historical Society.