Constructed in 1907, this building was home to a thriving business. Simone Marengo, an Italian immigrant owned and operated the West Berkeley Macaroni Factory in the first half of the 20th century. A classic rags-to-riches story of an immigrant who was able to leverage their savings through hard work and careful planning to fulfill a need, the business employed many before and after the Great Depression. The building is all that is left of the business and it is now a City of Berkeley Landmark. 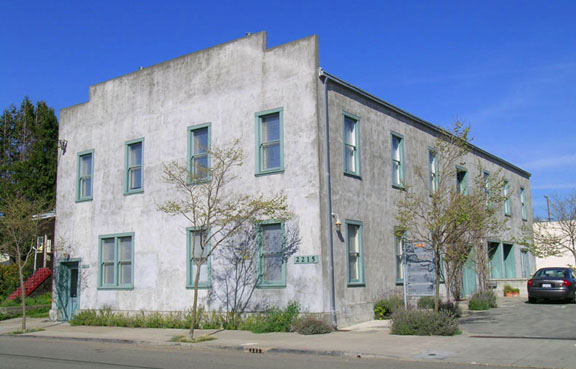 Simone Marengo immigrated from Italy to San Francisco in 1888 at the age of twenty, with his widowed mother and several siblings in his care. Within four years, Marengo was successful enough to own a two-story Victorian home. Within a few more years, he owned other homes that he used as rental property and a lot on Fifth Street.

The 1906 earthquake transformed Berkeley. It sent newly homeless San Franciscans fleeing into the city, and many of them were Italian immigrants like Marengo. In 1907, Marengo opened the West Berkeley Macaroni Factory in a lot behind his residence. An advertisement at the time claimed that the factory has produced pasta for 19 years, but there is no evidence that Marengo had ever produced pasta prior to 1907.

Though Marengo retained ownership of the building until his death, his role in the business of producing pasta was short-lived. Marengo's partners and associates oversaw the day-to-day operations of the factory, with Marengo serving solely as landlord.

He was still involved in business, however, as well as the life of the community. He owned various properties in Redding, including the Palm Hotel, and continued to rent homes in Berkeley. Known in the city as a sharp-dressing bon vivant, Marengo was considered by some to be the unofficial mayor of West Berkeley.

The building was sold in 1948 following Marengo's death. It was named a City of Berkeley Landmark in 1991.