This marker on the northeast corner of the intersection at N. 1st and Pine Streets tells the story of tragic shootout that took place here in a saloon on January 8, 1884. Although Abilene was founded in 1881, it had already earned a reputation as a lawless place. When it officially incorporated in 1883, the town decided to enact laws curbing disorderly conduct, such as prohibiting guns from being fired in the town and gambling. On that day in January, the City Alderman, Frank Collins, and his brother Walter, the County Sheriff, walked into the saloon, where they were approached by the owner, Zeno Hemphill, about the new gambling law. The men got into an argument which quickly escalated; Zeno pulled his gun and shot at Frank but Walter stepped in front, killing him. Frank and Zeno then began firing at each other. Zeno was killed and Frank died of his wounds two months later. The incident prompted many residents to support proposed prohibition laws in the coming years, although it wasn't until 1902 that saloons were closed for good in the city, a situation that lasted for 75 years. 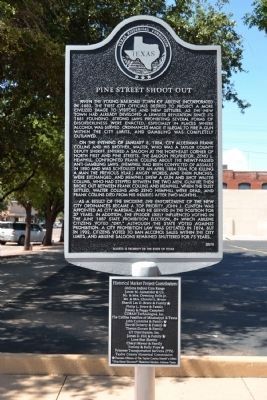