The Los Angeles Theatre is a 2,000 seat movie palace that was constructed in late 1930 and early 1931. The Theatre was commissioned by H.L. Gumbiner, an independent film exhibitor from Chicago, who also built the Tower Theatre nearby. The building itself was designed by S. Charles Lee and Samuel Tilden Norton and features a French Baroque interior. The interior bleeds opulence with its grand central staircase and gold brocade drapes said to have been modeled after the Hall of Mirrors in Versailles.

A shot of the Theatre's interior and stage. 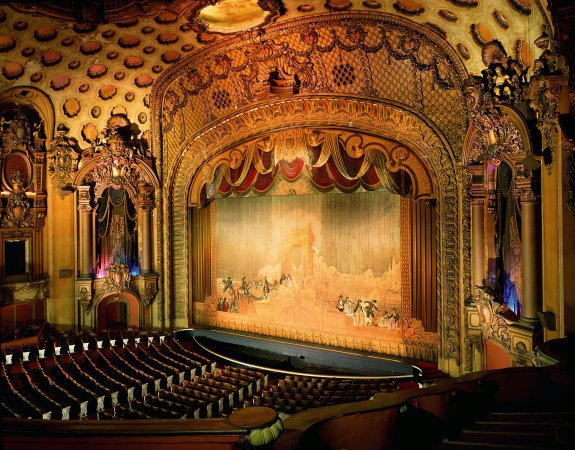 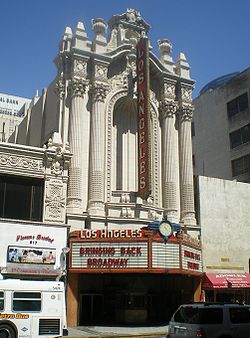 Aside from its lavish decor, the Los Angeles was the most technologically advanced theatre of its day. The lighting was controlled by a special Westinghouse dimming system and each circuit of lights could be preset to five different levels of illumination. The sound system was also state-of-the-art and the theatre also had an extensive public address system with banks of amplifiers in the projection booth powering speakers and microphones throughout the theatre.

The projection equipment was also very modern for the time and the movie screen measured 60ft wide by 30ft high, making it one of the largest in the city. The use of neon lighting was another innovation. In 1931 neon lighting was only a few years old and had not yet been used extensively in theatres. LeeThe Los Angeles used neon not only on the exterior vertical marquee but also as aisle lighting in the main auditorium. Although built primarily as a movie house, the Los Angeles had a full stage, orchestra pit and dressing rooms, allowing for live elements of many films.

Actual construction of the building took less than six months at a cost of $1.5 million, partly funded by Charlie Chaplin so that it would be open for the premiere of his film City Lights in January 1931. The building itself was constructed off-site and swung in between the existing buildings. It would be the last of such buildings constructed on Broadway as the economy was hit hard by the Great Depression.

The Los Angeles closed its doors in 1994, after sitting vacant for many years. It can still be rented out and has been used as a shooting location for various movies such as New York New York, Man on the Moon, Charlie's Angels, and the television series Mad Men.