The Lafayette-Durfee House was built around 1750 by Thomas Durfee, a judge and legislator. The home that he built was rather large at the time and was surrounded by vast acreage consisting of farmland and orchards as well as numerous outbuildings. Mr. Durfee was completely devoted to the American Revolution’s goal of national independence. His son, Joseph, fought in the war in New York and Rhode Island. The international patriot, the Marquis de Lafayette, was a frequent guest at the home. Today, the house is open to the public as a museum showcasing life and artifacts of the eighteenth century. It was added to the National Register of Historic Places in 1982. 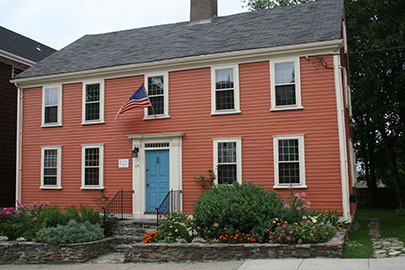 Thomas Durfee built his grand home on North Main Street, not far from the Taunton River, around 1750.  The date is approximate, but historians believe that he probably built it just before his son, Joseph, was born.  At the time, his property stretched all the way from the Taunton River to Watuppa Pond.  His home served as a waystation on the route between Newport, RI and Boston, MA.  The Marquis de Lafayette, a soldier well-known for his bravery on the battlefield, often stayed with the Durfee family.  The Durfees had reserved a room for him on the second floor of their home.

During the Revolution, Thomas Durfee mortgaged all of this property to help finance the war effort.  Joseph served in the militia and fought in New York and Rhode Island.  At one point, he led a small contingent against the British, who tried to sneak their way into Fall River during the night. The small band of revolutionaries retreated inland when the British starting firing their cannons.  However, Durfee’s men bravely fought them off when the British followed them into Fall River, killing two and severely wounding another.

The house has been moved twice over the years.  First, it was moved in 1838 because North Main Street was being straightened to make room for horse tracks, so the house was moved out of the way.  Later, it was moved in 1875 by Charles Lewin (the owner of the home at the time) to its present location on Cherry Street.  The central fireplace had been obscured, the home turned into four apartment units, and the original clapboards had been replaced over time by crab asbestos shingling.  During the twentieth century, the home was used as an tenement until it was purchased by a descendant of the Durfees, Miss Caroline Durfee, in 1973.  She sought to have the home restored to its original appearance and shared with the people of Fall River.   The Lafayette-Durfee Historical Foundation hired restoration specialist Vaughn Baasch to install historically accurate clapboard siding and to build a new porch with stone steps, among other structural repairs.

The historic home features a collection of 18th century clothing, weapons, and medical equipment.  Each room is restored to way they would have appeared when the house was first built in 1750.  Costume marker Hallie Larkin handstitched the clothing created for the historical period. There are also spinning wheels, cradles, chests, crockery, and an old horsehide chair, which is the only piece which the Fall River Historical Society believes was once owned by Thomas Durfee.  Each piece in the museum tells a story about the nation’s fight for independence.

Admission to the museum is free, although they do suggest (it is not required) a donation of $3.00 for each adult.  It is only open during the spring and summer months.  The historic home is open for tours and educational programs on Wednesdays through Sundays from noon to 4 PM.

Spring and Summer, from Wednesday thru Sunday. Open 12PM to 4PM.