This historical marker commemorates the first professional football game on November 12, 1892, at Pittsburgh's Recreation Park. The winning touchdown in that game was scored by William "Pudge" Heffelfinger, who is pictured below.

The historical marker is located near the southeast corner of Heinz Field. 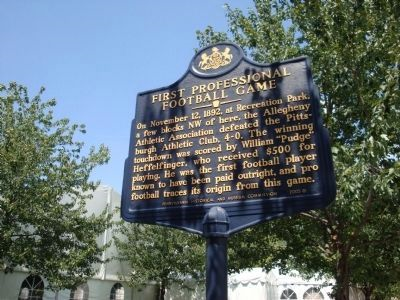 Pudge Heffelfinger was paid $500 and scored the game's only touchdown. 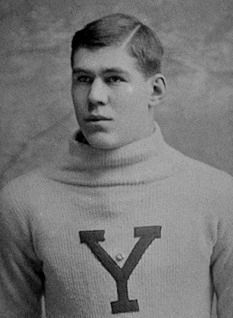 American football can be traced back the period following the Civil War when team sports became increasingly popular. Although it never matched the popularity of baseball, Americans began playing a new variation of soccer and rugby that included stoppage time and set possessions. The game placed great importance on blocking and tackling, as the forward pass would be illegal for several decades until the game became popular among audiences who appreciated the way passing the ball downfield could open a game that usually featured a scrum and a pile of blockers and relatively little movement or action for spectators.

The original game was played by athletic clubs and colleges. These schools and clubs helped spread the popularity of the sport to many Eastern and Midwestern cities. The competition between athletic clubs became fierce in these cities as each club and college vying for the title of having the top team.

The teams were eager to win and began bending the rules to allow for the teams to be filled with the best players possible. This increase in competition led to the first professional game as good players found that they could earn a little money on the side for pretending to be a student or club member. Prior to this, the games were strictly amateur in nature and playing for pay was taboo. Because of the taboo, some players were "paid" with gifts, which they might later sell for cash. Soon thereafter, highly sought after players were offered cash payments to play in matches.

William "Pudge" Heffelfinger was one of the early players to earn significant pay as a football player. In this game, where a couple players on both sides were likely paid, Pudge received the previously unimaginable sum of $500. The Alleghany Club made no secret of hiring Heffelfinger, leading many to mark this game as a significant moment in football's history. Pudge would go on to score the winning touchdown in that game. In fact, Heffelfinger scored the only touchdown in that game. By the rules of that time, touchdowns were worth 4 points, and Allegheny won the game 4-0.

This historical marker is inscribed with the following statement:
"On November 12, 1892, at Recreation Park, a few blocks northwest of here, the Allegheny Athletic Association defeated the Pittsburgh Athletic Club, 4-0. The winning touchdown was scored by William "Pudge" Heffelfinger, who received $500 for playing. He was the first football player known to have been paid outright, and pro football traces its origin from this game."

Mendez, Christopher. "How the Pigskin Got Professional." The Pennslyvania Center for the Book. Spring 2010. Accessed June 30, 2017. http://pabook2.libraries.psu.edu/palitmap/Football.html.