Altenheim means elders’ home in German and The Altenheim is a historic German-American retirement home originally built in 1893 to house German retirees. It was founded prominent German-American families, such as the Sutros and others, as an upscale home for older German-Americans to live out their golden years. The original building was designed by Charles Mau, but it burnt down in 1908. The current structure was built in 1908 in a Colonial Revival style designed by Oscar Haupt.

A Black and white shot of the Altenheim. 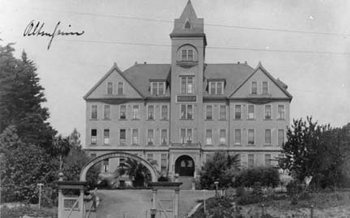 In the late 1800s, wealthy German immigrants in San Francisco, such as Adolph Sutro, Mortimer Fleischacker, and Fritz Rosenbaum realized a need for a German old people’s home where men and women could live out their “Lebensabend” in the peace and surroundings earned by a hard life. On March 31, 1890, they formed The Altenheim Association.

While originally looking at locations in San Francisco, the decision was made to purchase land in Oakland’s Dimond District for $6,000. On May 17th of 1891, a picnic was held at the site to raise money for the building fund. This picnic has survived as an annual tradition at The Altenheim with the Mayfest - a time of music, dancing, eating and drinking for members.

Finally, in August 1893, the cornerstone for the new building was laid and The Altenheim was dedicated in ceremonies a year later. As the years progressed, the home was fortunate to escape damage from the great earthquake of 1906. However, a separate fire destroyed The Altenheim in July 1908.

The Altenheim Association continued to operate this residential care facility up until 2002 when it closed due to financial concerns. An agreement was made with the Citizens Housing Corporation (CHC) that would allow the facility to continue under the spirit of developing affordable independent senior housing. Under a 90-year lease agreement for the residential buildings, the structures would receive much-needed improvements to bring them up to the required standards.

With the lease completed, The Altenheim Association was restored to financial solvency. Its new charter would be to lease The Altenheim to be used as a residential facility for the elderly and to promote German cultural traditions which benefit the community.