Boise Art Museum (BAM) is one several of museums and cultural attractions in Julia Davis Park. It holds a collection of modern and contemporary works and offers changing exhibitions throughout the year. It also offers various educational programming for people of all ages such as classes and workshops.

The Boise Art Museum houses a collection of modern and contemporary works of art. This photo shows the back side of the museum and the sculpture garden. 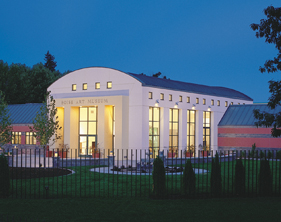 The Boise Art Museum began as the Boise Art Association in 1932. It put on its first exhibitions in the Carnegie Library before moving into its newly built location in Julia Davis Park called the Boise Gallery of Art. Although the gallery did not actively collect at that time, it presented local and regional artwork and played an important role in Boise’s growing community.
In 1961, the Boise Art Association incorporated as a non-profit organization under the name Boise Gallery of Art. In the mid-sixties, the first professional staff members were hired and exhibition programming became more ambitious. The need for additional space quickly became a priority, and in 1972, construction began on a year-long expansion program. The building, which encompassed more than 10,000 square feet, re-opened to the public in 1973.
In 1986, the institution successfully completed a fundraising campaign to support a second renovation for expansion of its galleries as well as the establishment of an Endowment Fund. Upon completion of the expansion in 1988, the organization was renamed Boise Art Museum to reflect its focus on developing its Permanent Collection and education programs as well as the display of significant traveling exhibitions.