The Jabez Howland House is believed to be the only existing home in Plymouth where the Pilgrims actually lived. Jabez Howland’s parents, John and Elizabeth, arrived on the Mayflower in 1620 and lived with their son in the home between 1667 and 1680. The home was under private ownership until the early twentieth century, when it was purchased by the Pilgrim John Howland Society and eventually restored to its original, colonial appearance. It was added to the National Register of Historic Places in 1974. 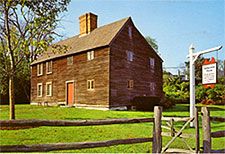 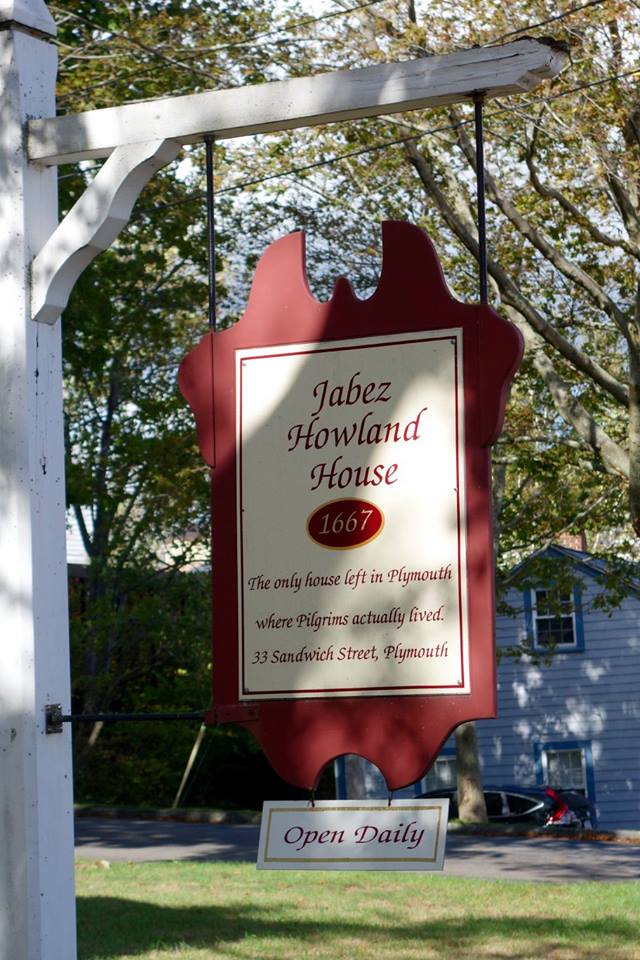 The fireplace (Courtesy of the Pilgrim John Howland Society) 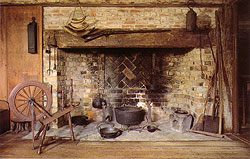 The Jabez Howland House was built in 1667 by Jacob Mitchell.  It gets its name from its second owner, Jabez Howland, who purchased the home from the original builder.  The oldest part of the building consists of a two-story timber frame with a hall, hall chamber, and porch. The second story was added by Jabez to accommodate his parents.  Additional work was done to the building in 1750. The house remained as a private residence until it was purchased by the Pilgrim John Howland Society in 1912 and converted into a historic house museum.

Jabez was the son of Pilgrims John and Elizabeth (Tilley) Howland who arrived in Plymouth in 1620 on the Mayflower. John Howland arrived as a servant for Governor John Carver. The young man almost didn’t make it to the new world, as he fell overboard on the way to Plymouth.  Elizabeth was the youngest of five children in her family and the only child to make the voyage to Plymouth with her parents.  Unfortunately, her parents both died during the first harsh winter.  Elizabeth was orphaned but taken in by the Governor’s household.  She eventually met and married her husband John, probably before her sixteenth birthday.

One of their sons, Jabez, was a Blacksmith by trade and also served as a Lieutenant in the militia during King Philip’s War. Jabez was the eighth of ten Howland children born to John and Elizabeth.  He lived in the home with his own family until 1680.  His parents spent winters with Jabez’s family in the home until John’s death in 1672/3.  After her husband’s death, Elizabeth continued to stay in the home with her son’s family.  In 1680, Jabez sold the house and moved with his family to Bristol, Rhode Island. Elizabeth moved to Swansea to be with her daughter Lydia Brown and her large family. She stayed with them until her death in 1687.

An extensive rehabilitation program was performed in the 1940s to restore the home to its original appearance. Today, the museum is home to a collection of antique furniture from early colonial America as well as artifacts uncovered during archaeological digs at the Howland’s family farm at Rocky Nook.  Also preserved in the museum is a collection of letters and documents from some of the Howland family’s famous descendants, including Franklin Delano Roosevelt and Winston Churchill.  It is interesting that so many families can trace their lineage to the John and Elizabeth Howland, since they were two of the earliest settlers and had large family (ten children) themselves.  Each of their children survived to adulthood and had many children of their own, establishing the beginning of a massive genealogical line.

The museum offers tours from Memorial Day through Thanksgiving weekend.  Until October 31st, tours are offered from 10 AM to 4:30 PM and then in November the hours are shortened slightly from 10 AM to 3:30 PM.