Chicago's immense growth in the late 19th and early 20th century coincided with its existence as a major railway hub. The Dearborn Station, built in 1885, sat at the south end of the business district near the infamous "Loop," and is the only station remaining of Chicago's six major stations that emerged in the late 19th century. Its nine-story clock tower reminds us of a time when railway schedules heavily influenced the general flow of people's daily lives.

In 1922, a fire damaged the clock tower. This picture notes the pitched roof that existed prior to that fire. Photo provided by American-railway.com, but owned by Detroit Publishing Company. 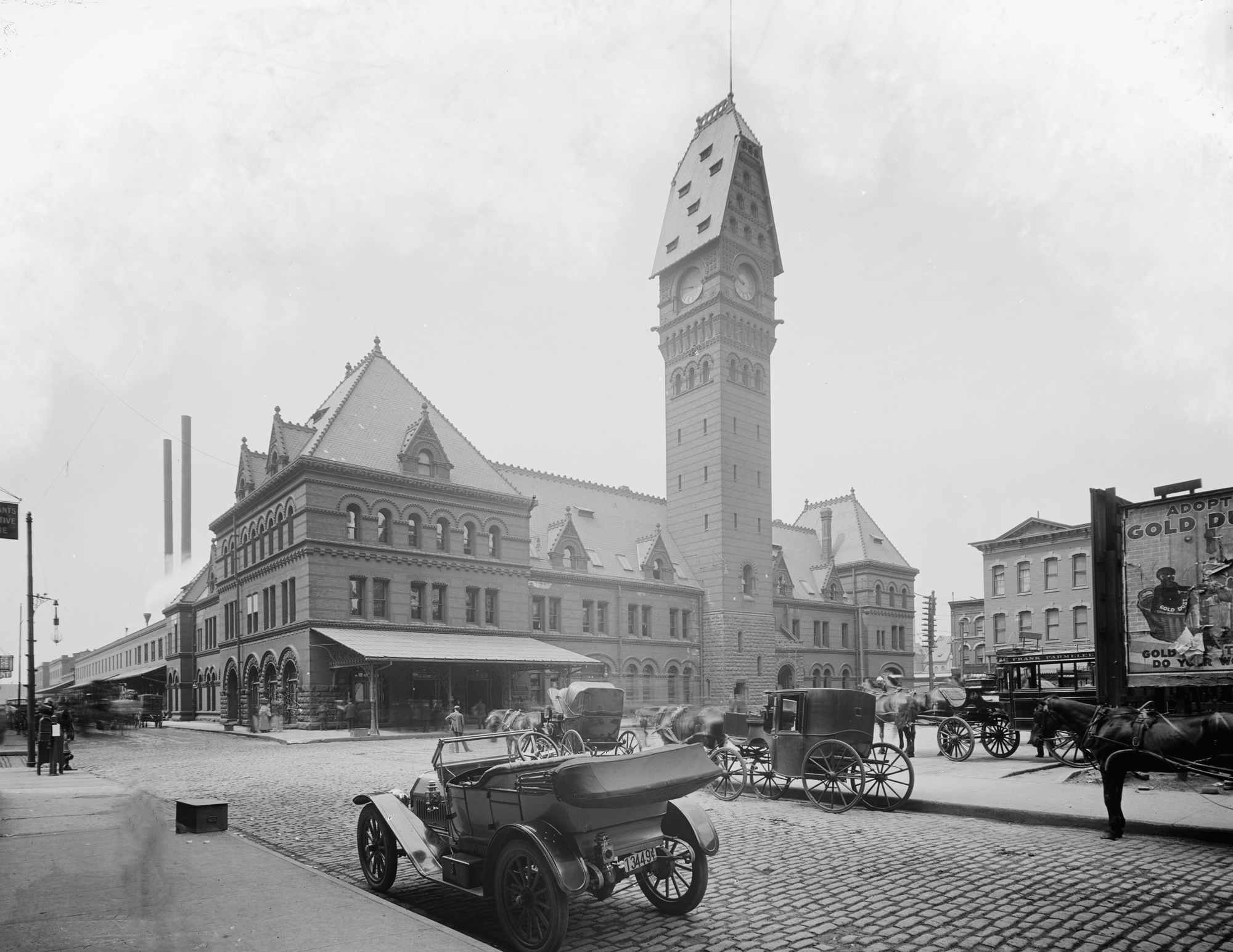 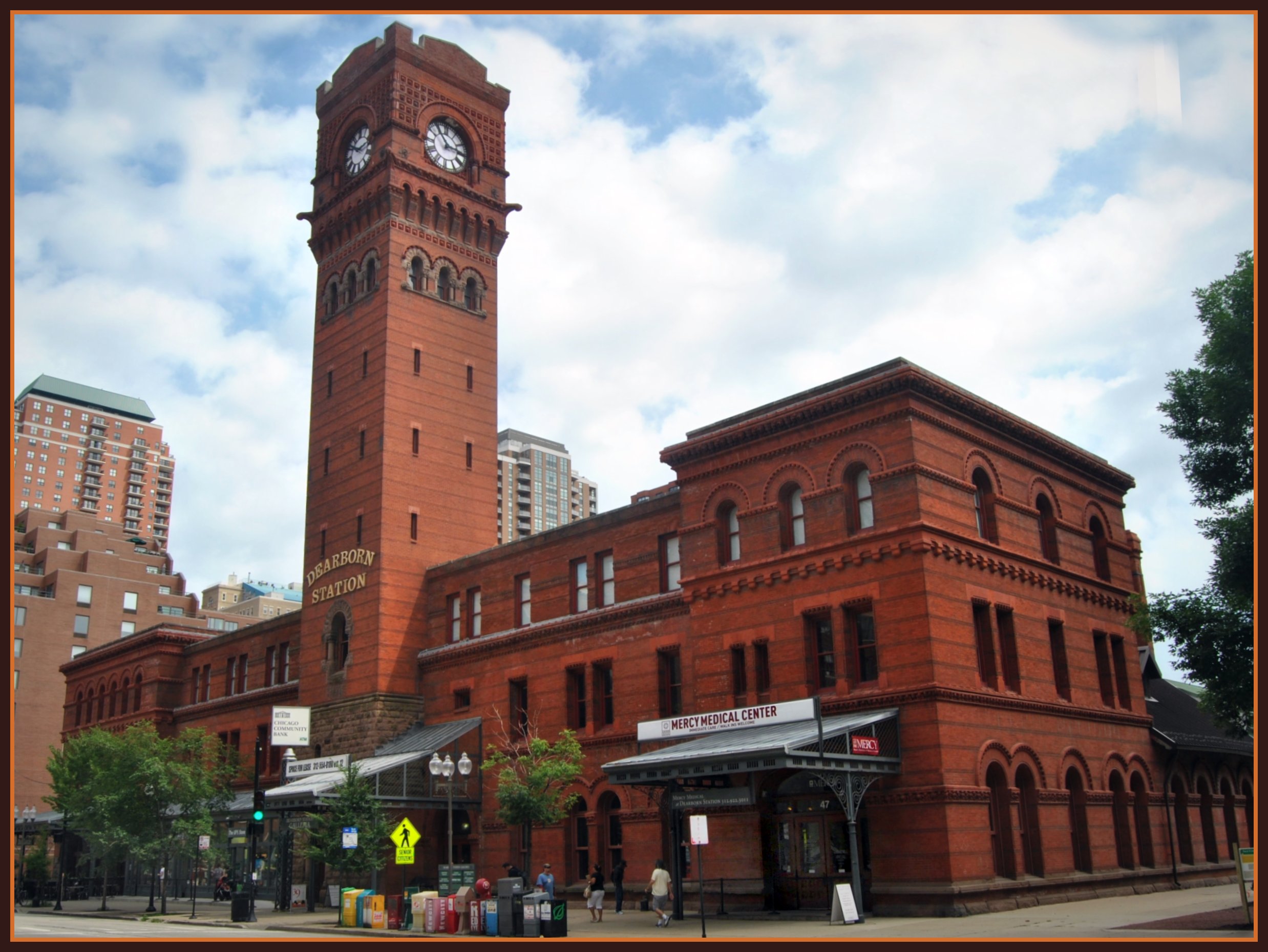 The nine-story, large clock tower that adorns the red brick Dearborn station signifies the importance of the railroad to those living in Chicago, and much of the U.S., at the turn of the 20th century. The size of the clock, and the height of the tower, proved necessary for those roaming the town so that they could gage their daily schedules based on the train schedules. Both people and goods traverse the nation and landed in Chicago in abundance during that era.

Chicago's history first began with investors who saw potential in Chicago due to its location near Lake Michigan and the possibility of connecting the lake to the Mississippi River, which would ostensibly connect New York to New Orleans through Chicago. That resulted in the construction of the Illinois & Michigan (I&M) Canal -- one of many canals built in the U.S at that time, including the Erie Canal in the early 19th century that connected New York to Lake Erie through Buffalo (near Niagara Falls). The canal was one of the last steps of creating mass transportation for a country still relying heavily on waterway navigation -- the railway would soon takeover.

Not long after the I&M was finished, investors quickly turned to idea of the railway. Chicago, partly due to the influence of Stephan A. Douglas, existed as one of the major hubs of the Trans-Continental Railway, approved during the Civil War. With St. Louis existing as a border state and enduring turmoil during the war, Chicago grew substantially as a Midwestern hub, including for industries such as meatpacking. The war, a nation changing its dietary habits, investors who bet on Chicago during its canal stages, and other factors all worked towards turning Chicago into a boomtown, one that would enjoy one of the fastest growth periods every seen by any city; Between 1870 and 1900 Chicago's population exploded from 300,000 to nearly 1.7 million. And that growth largely coincided with increased railway traffic.

During its peak, during the Roaring Twenties, 146 trains per day arrived to Dearborn Station carrying 17,000 passengers. Trains included Santa Fe’s luxurious Super Chief, El Capitan, and Chief, as well as several other prominent railway companies, most of whom sent their best trains to Dearborn Station.

The clock, once a functional necessity, quickly grew to something more of a decorative novelty as Chicago's skyscrapers grew in rapid fashion, hiding the clock from most people's sight. That was the first sign of a changing society that slowly saw the demise of the important of passenger railway travel. Even by the 1920s, more people began taking streetcars or even automobiles. That trend continued so that by September 30, 1967,  the Monon Railroad ended its service to Dearborn and others quickly followed suit. The station closed in 1971 and now exists as a retail shop on the southern end of Chicago's "Printer's Row," another industry that helped Chicago grow.

Teaford, Jon C. Cities Of The Heartland: The Rise And Fall Of The Industrial Midwest. Bloomington : Indiana University Press, 1993.