The St. Louis Walk of Fame was conceived by local entrepreneur Joe Edwards in 1988. It is located in the Delmar Loop, which is situated partly in the city of St. Louis and partly in the suburb of University City. Each honoree gets a star and a plaque identifying his or her achievements and connection to St. Louis. The purpose of the Walk is to draw people to the Loop and its shopping district and to encourage people to learn more about St. Louis and its famous sons and daughters. So far, 140 persons have been inducted. The St. Louis Walk of Fame is open to the public 24 hours a day, seven days a week. 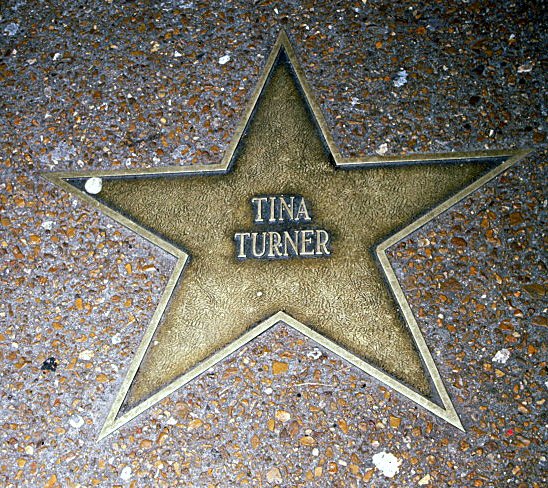 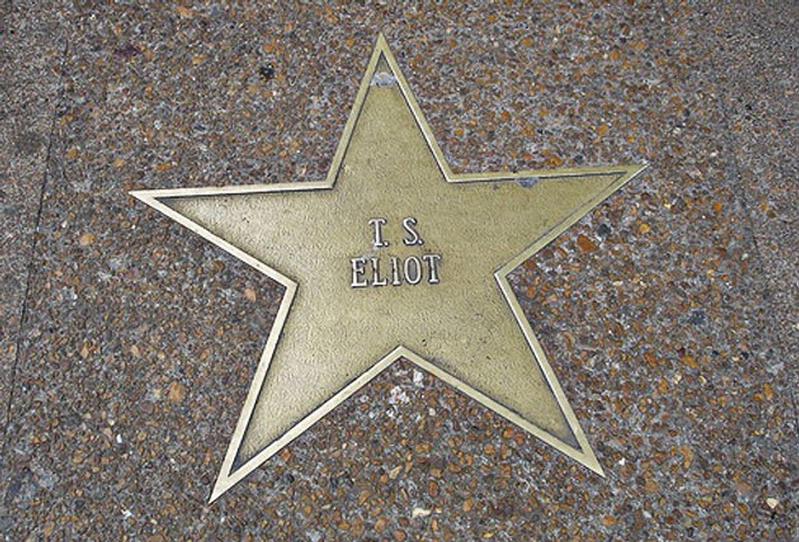 The star for Robert S. Brookings (founder of the Brookings Institution) 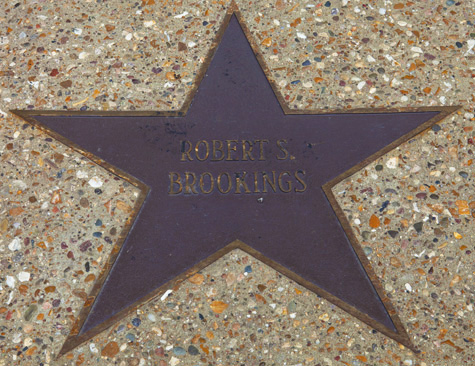 The star and plaque for playwright Tennessee Williams 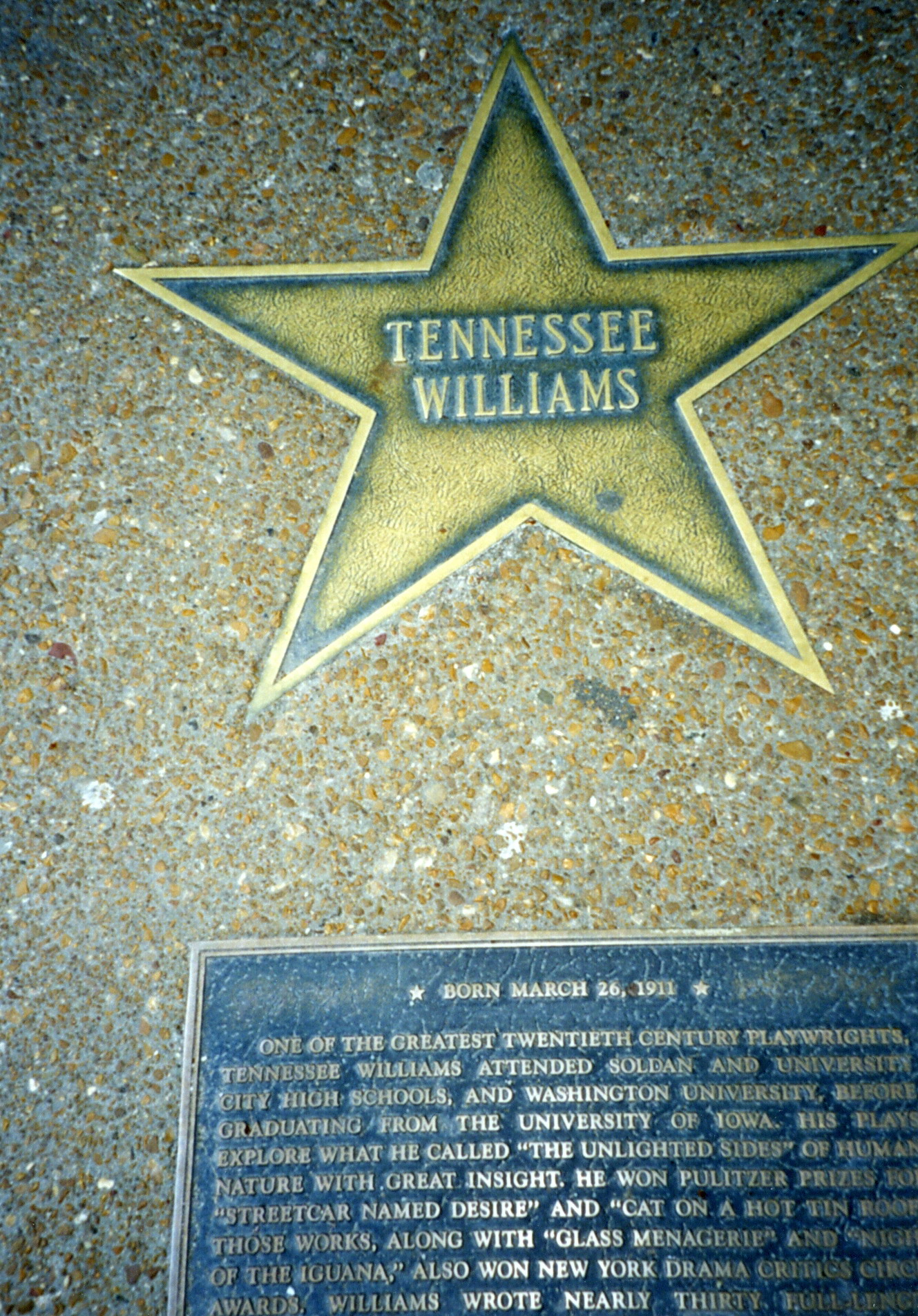 Today, the street known as the Delmar Loop has been designated (as of 2007) as one of the 10 Great Streets of the United States by the American Planning Association, but not too long ago, it was merely a strip full of abandoned storefronts. The street was established in 1891 when the state legislature empowered the City of St. Louis to issue ordinances to establish boulevards in the city, and a racetrack and amusement park were soon constructed there. (The Loop got its nickname from a long-dismantled streetcar line which used the area as a turnaround.) After 1906, the incorporation of the suburb of University City made The Loop into a thriving retail area until the 1950s. However, the competition of suburban shopping malls in the post-World War II era made the street seem much less attractive to many. The city government responded by widening sidewalks, narrowing streets and reserving all streetfront space for retail use, including restaurants, shops and galleries. However, much of the street was still deserted.

In 1972, a young entrepreneur, Joe Edwards, and his wife purchased a local pub called Blueberry Hill and soon sought to organize local business owners to improve the area. A major breakthrough occurred in 1984, when the Delmar Loop-Parkview Gardens Historic District was entered in the National Register of Historic Places, which allowed developers to qualify for Federal tax breaks. Shortly afterwards, in 1988, Edwards came up with the idea of the St. Louis Walk of Fame, which would provide an attraction to draw visitors to the Loop, and at the same time educate people about St. Louis' diverse history and culture. The Walk was originally established in the University City area, with 10 people nominated each year for each of the first five years. With the induction of Cedric the Entertainer in 2008, the Walk crossed for the first time into the City of St. Louis proper.

It is now much more difficult for people associated with St. Louis to get a star and plaque on the Walk then it was during the attraction's early years. (Edwards has acknowledged that there are some Nobel Prize winners associated with St. Louis that have not yet gotten in.) On average, only three nominees per year are accepted. However, the actual nomination process is quite simple and anyone can participate. All that a person must do is send a letter to the nominations committee, listing: a) the nominated person's name, date and place of birth, and his/her connection to St. Louis, which must involve having been born in the city, or having spent his/her formative or creative years there; and b) the accomplishments of the person nominated, and why these were important on a national level (not just within the St. Louis area). Of the approximately 250 nominees annually, Edwards reduces the list down to about 40 names, which are then decided by the committee, which consists of university chancellors, representatives of arts and historical organizations and libraries, and past inductees.

Currently, there are 140 inductees in the Walk of Fame. These include many famous figures in the entertainment field, such as early 20th Century pianist and composer Scott Joplin, legendary singer and dancer Josephine Baker, Hollywood actors William Holden, Betty Grable and Vincent Price, guitarists Chuck Berry and Albert King, jazz great Miles Davis and contemporary singer Tina Turner. There are also athletes, such as baseball legends Yogi Berra and Rogers Hornsby, boxer Archie Moore and tennis champion Jackie Joyner-Kersee, as well as giants of the arts such as novelist Maya Angelou, playwrights William Inge and Tennessee Williams and poets T.S. Eliot and Marianne Moore. Others included are businessman/educator Robert S. Brookings of the Brookings Institution, and historical figures like Generals Ulysses S. Grant, William Tecumseh Sherman and Dred Scott, the former slave whose court case led to the infamous Dred Scott decision. In addition to celebrities, the Walk includes ordinary people who have accomplished extraordinary things, such as Max Starkloff, a disabled St. Louis native who founded the Starkloff Disability Institute and helped secure passage of the landmark Americans with Disability Act in 1990.

The six-block Loop area attracts numerous people each year, including an estimated 200,000-plus residents and millions of tourists. In acknowledgement of its central significance to the Loop, the St. Louis Walk of Fame is open to the public 24 hours a day, seven days a week.