A plan of the original gardens from 1932. 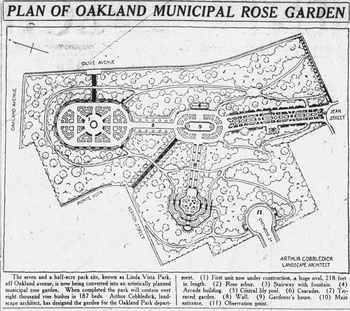 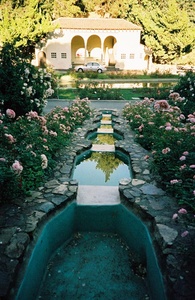 Before the rose garden came to fruition, the area was known as Linda Vista Park. The rose garden itself was originally called the Oakland Municipal Rose Garden. The garden was landscaped by Arthur Cobbledick in the 1930s with the amphitheater being one of the key design elements.

The landscaping began in 1932 after a moment of inspiration at the Businessmen's Breakfast Club. In response to a culture shaped by The Great Depression, the garden was designed to highlight the extravagant roses in formal gardens surrounded by a rugged natural setting. The first rose was planted by Mayor Fred Morcom in 1933 and the garden was later named in his honor after a unanimous vote by the Board of Park Directors.