Constructed in 1913, the Latham Square Fountain commemorates the lives of James H. Latham and Henrietta Marshall Latham. The fountain was a gift from Edith and Milton Latham who wanted to honor their parents, James and Henrietta Latham, who were pioneers of Oakland and promoters of Humane Education. James Latham was born in Ohio, served in the US-Mexican war at age 17, and worked for Wells Fargo & Co. before opening what was then the largest brokerage business in San Francisco. He lived with his wife Henrietta, whose family had been involved in the gold rush, in a mansion on 17th and Jackson where they raised their three children, Edith, Milton and Charles. 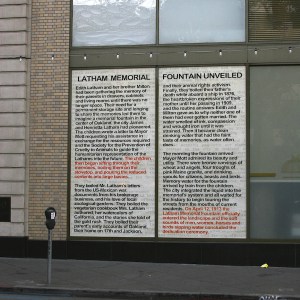 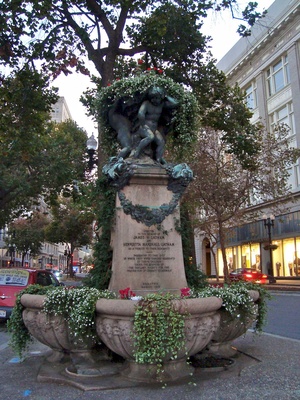 The fountain was created by French sculptor Raphael Peyre and depicts several scenes, including a cherub restraining a man from beating a donkey. The large bowls surrounding the base were intended as horse water troughs and between the troughs were drinking fountains for people, with and the overflow from those ran into smaller basins for dogs.

The Fountain was unveiled during a ceremony led by the City of Oakland and the Society for the Prevention of Cruelty to Animals on April 12, 1913. Before the unveiling, there had been only one memorial to local citizens in Downtown Oakland, the Jack London memorial oak tree in Frank Ogawa Plaza.

Mr. Latham passed in 1876 and Mrs. Latham in 1909. Shortly after her mother’s death, Milton and Edith Latham furthered the family’s work in animal respect activism by creating the Latham Foundation for the Promotion of Humane Education, whose purpose was to teach the respect of animals and others in schools, and whose initial offices were in the Latham Square Building overlooking the fountain.

The inscription on the fountain reads: “Erected to the memory of James H. Latham and Henrietta Marshall Latham as a tribute to their humanity. Presented to the city of which they were earliest residents by their children under the auspices of the Society for the Prevention of Cruelty to Animals. Erected March 1913”.