The view of the field from second base 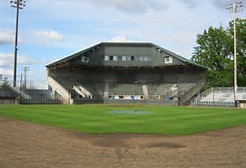 The field was renovated in recent years, including this new turf surface that was designed to better handle the rains of the Pacific Northwest. 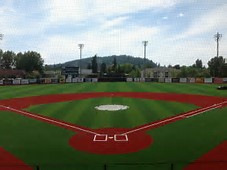 Ken Griffey Jr. played at this field in 1987 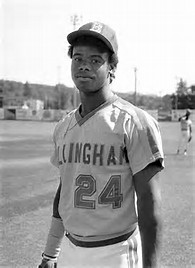 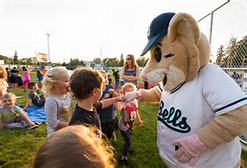 Constructed in 1964, Joe Martin Field has been home to several Major League affiliates and now seats 1,600 fans. The ball field was known as "Civic Field" until 1980, when its name changed to honor Joe Martin.

The Bellingham Dodgers, a single- A affiliate of Los Angeles Dodgers, became the first Major League Baseball affiliate to make this their home field in 1973. The team played only three seasons in Bellingham and were followed by the Bellingham Mariners, a team that became a local favorite. The Mariners were the longest of the three minor league teams to call this field their home, playing from 1977 to 1994. During these years, many future Major League stars made their baseball debut at this field. After the Mariners moved cities, the class- A affiliate of the San Francisco Giants moved in- the Bellingham Giants. However their stay in the city only lasted from 1995-1996.

The Bellingham Mariners were the face of not only Joe Martin Field, but the entire city of Bellingham for 18 memorable years- or 'seasons' as the baseball fans would say. In those 18 seasons, the Mariners became four-time Northwest League champions (1977, 1980, 1986, 1992) and gave their fans the opportunity to watch some of baseball's all-time greats do what they do best. Some of the most notable names that called this field home for a portion of their career include: Pedro Guerrero- 1974; Rick Sutcliffe- 1974; Dave Stewart- 1976; Mike Scioscia- 1976; Edgar Martinez- 1983; Ken Griffey Jr.- 1987; Derek Lowe- 1992; Joe Nathan- 1995. Unfortunately, the city of Bellingham was forced to say goodbye to their beloved Mariners because the Seattle Mariners wanted to move their class- A affiliate closer to Seattle, Washington.

In 1999, the Bellingham Bells claimed Joe Martin as home. The Bells were members of the Pacific International League for six years but later transitioned into the West Coast Collegiate League- now shortened to just the West Coast League (WCL) which is featured as one of the top collegiate summer baseball leagues in the nation. In 2014, the field went through its only renovation when the natural grass surface was replaced with artificial synthetic turf. This renovation was completed in March of 2015 at the cost of $1,438,200. From the perspective of those who play in Bellingham, the new field is an asset for its ability to withstand the constant Northwest rain.