This marker was erected by the Pajaro Valley Historical Association in 1955 and commemorates the life of Charley Darkey Parkhurst. Parkhurst was born as a woman but lived as a man in the 1800s. Often regarded as one of the first transgender men, Charley (born Charlotte) was outed at the time of his death. Parkhurst became a well known and very successful stagecoach driver during the gold rush of the 1840s and 1850s. He was also one of the first biological women to vote in the mid-1800s- an era between the period of the early republic when a handful of widowed property owners voted and the late 19th century when biological women secured legal recognition of their right to vote. It is likely that Parkhurst the first biological woman to have voted in the state of California. The secret of his birth sex was not discovered until after his death in 1879. His life may have been shortened by his habit of using chewing tobacco throughout the day. Parkhurst was well-liked in his lifetime and those who knew him well were shocked to find that "One-Eyed Charley" was actually biologically female.

This marker for Charley Darkey Parkhurst can be found in section B, plot 20 of the Watsonville Pioneer Cemetery 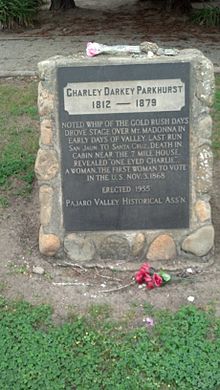 Charlotte “Charley” Darkey Parkhurst was born in Lebanon, New Hampshire in 1812. Her early life is ambiguous with some accounts stating that she had run away from an orphanage or her uncle’s farm. She traveled to Georgia in the 1840s which is when her transition began. Due to the androgynous dress that was sometimes shared by boys and girls during the 1820s it would have been possible for Charley to have started concealing his identity as a female prior to this time.

During the God Rush that began in 1849, Parkhurst traveled from the east coast to California by way of the Panama Isthmus. While in California, Charley worked as a stagecoach driver and gained great respect for his abilities at driving a team of six horses attached to a coach. Stagecoach drivers also worked carrying strongboxes for banks and transported valuables to and from cities. Working as a stagecaoch "whip" at this time was incredibly dangerous work, as the stagecoaches were tempting targets for would-be robbers.

In 1856, Parkhurst was kicked in his left eye while tending to a horse and lost vision in the eye, earning him the nickname “Cockeyed Charley” or “One-Eyed Charley.” Another incident that added to the legend of Parkhurst was when he managed to drive a coach over a bridge on the Tuolumne River during a massive rainstorm shortly before the bridge was washed out. In 1858, Charley was held up by Sugarfoot twice, the second confrontation led to him killing the outlaw.

During the 1860s, Parkhurst worked in the logging industry in California. At age 55, Parkhurst registered to vote and voted in the 1868 presidential election, 52 years before women were granted the right to vote. While women had been known to vote elsewhere in the country, this was likely the first instance of a woman voting in the state of California. In the 1870s Charley and friend Frank Woodward were cattle ranchers.

When Charley Parkhurst died in 1879 everyone who knew him was deeply surprised that he was actually a woman, especially those who had lived and worked right alongside him for many years of his life. Parkhurst worked as a whip, lumberjack, and cattle rancher and earned the respect of his fellow workers in each of those fields.