Duke Homestead is a State Historic site and home to the North Carolina Tobacco Museum. Duke Homestead was home to Washington Duke and his family from 1852 until 1874 as well as home to their farm and first factory buildings for what would grow into a tobacco empire. Following his return from the Civil War however, Washington Duke would change his entire operation, making the transition from farming to manufacturing. In doing so, W. Duke & Son's was born. In only a few short years the Duke Family would be manufacturing approximately 125,000 pounds of tobacco annually. The demand for their product grew so much the family would eventually move from the property in 1874, moving to downtown Durham where their legacy would continue to grow and influence the economy, industry, and history of North Carolina for decades.

The third factory on the left was built to receive and store unmanufactured tobacco. Workers would beat the tobacco very small and then sifting the leaves into bags to be packaged. Today, materials can be seen in the third factory. 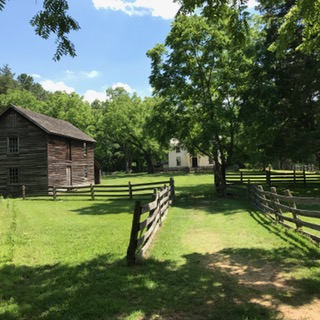 In the forefront is the first factory used by the Duke family and the existing, small-scale tobacco field in the background currently managed by the museum and staff. 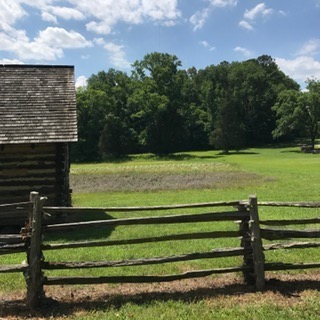 The third factory. This building sits in front of the main house and was the last building added to the property before moving to downtown Durham. 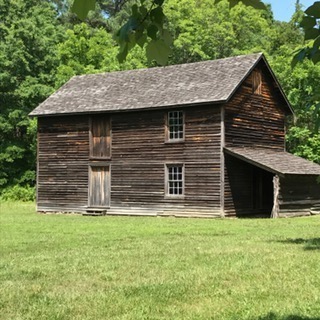 At the curing barn farmers and hired hands tended fires for several days, slowly increasing the temperatures to dry out the tobacco, causing the leaves to turn a yellow color. Once finished curing the doors would be opened to bring back the moisture. 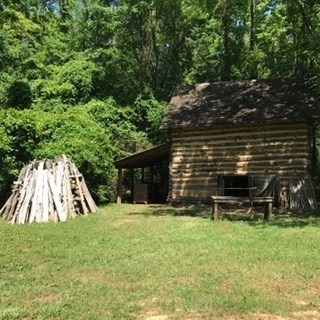 Tobacco that is hung or "looped" onto sticks that was kept in the curing barn. These sticks of looped tobacco were stacked high throughout the structure, sitting over a furnace during the curing process. 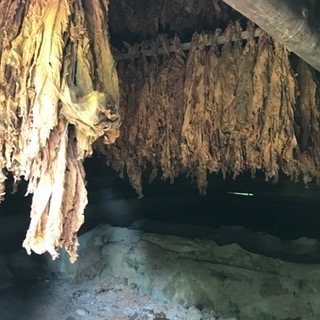 The pack house pictured was used to store cured tobacco until it was ready to be taken to market. While here, leaves would be sorted based quality of the leaf. Size, color, and condition of the leaves were used to determine the grade of each leaf. 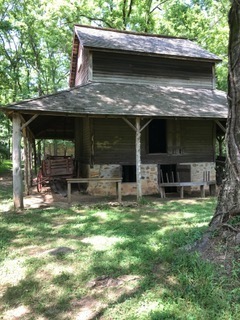 The main house was built in 1852 by Washington Duke. The building originally was a 4 room home with the kitchen at the rear of the home. It is believed that the kitchen was moved once the dining room was later added. 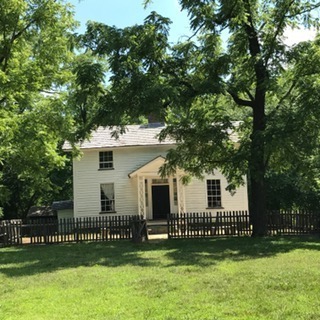 Washington Duke was born in 1820 to Taylor and Dicey Jones Duke in Orange County, North Carolina. He would live at home until his twenty first birthday when he would leave to become a tenant farmer. A year after leaving home he would marry his wife, Mary Caroline Clinton, on August 9th, 1842. The couple would have two children, Sidney Taylor and Brodie Leonidas. Unfortunately for Duke, Mary Caroline would pass away in 1847. Washington Duke would continue to raise his children while tending to his corn, wheat, oat, and sweet potatoes. With a lot of hard work and some luck, Washington would acquire land from the estate of his father in law and buy additional property, bringing his land total to be approximately 300 acres.

In 1852, Washington Duke married second wife, Artelia Rooney. He built the main house on the property for her as a wedding gift where they would live until they left the property in 1870. The couple would later have three kids together: Mary Caroline, Benjamin, and James Buchannon. Again, tragedy would strike the Duke family, as Artelia passed away after attempting to nurse Sidney back to health after a battle with Typhoid Fever, catching it in the process. The same year the cotton crop failed and the nation began to fall into the darkness of what became the Civil War. After the death of Artelia, Washington Duke continued to work harder than ever on his farm with primarily family. He had one registered slave, known as Caroline, who was hired as a housekeeper. Washington was known to have Union sympathies but would borrow slaves from nearby farms when extra help was needed.

In 1863 Washington and his son Brodie were drafted into the war due to the new conscription laws that required all men age 18 to 45 to enlist. Prior to being enlisted, Washington decided to sell all his farming equipment and focused on tobacco. Still unclear to many if Duke sold or rented out his property, he received payment in the form of tobacco leaves that was stored on the property. Eventually the Confederates surrendered and Washington Duke was set free from the prison in which he had been held captive until the end of the war. Following his release he walked the 135 miles from New Bern, North Carolina to his homestead. Although the Confederacy had lost, the Duke family was about to take full advantage of it. Following the end of the war in 1865, Duke built a small cabin near his home (the first factory) and began packaging “smoking tobacco”. Washington Duke then began to travel with his new product across state lines, selling it to anyone who would be interested. By the end of the first year, Duke and his sons had made approximately 15,000 pounds of product. For the next several years, Washington Duke and his sons continued to develop their company and become partners. W. Duke and Sons was born and so was the beginning of dominant business.

By 1870, the Duke family had moved away from the homestead and into downtown Durham. Moving to downtown Durham allowed them to be closer to the railways, increasing shipping means, and allowed them to build a warehouse to totally expand their operations. Their once small time family operation had developed into a large scale tobacco company that would eventually establish itself, and North Carolina, as a tobacco powerhouse. Over the years the company would partner with others, becoming W. Duke, Sons and Company, eventually selling cigarettes and coming the largest producer of cigarettes in the country. By 1890, the Dukes’ biggest rivals would want to form a partnership with them to become the American Tobacco Company.

At the age of 60, Washington Duke was fortunate enough to retire and leave the business dealings to his sons in order to become more involved with his family, the community, and the church. He would took part into convincing Trinity College to move to the area and continuously made large donations to the institute. At one point, Duke offered a $100,000 endowment to allow women to become residential students. Such an action resulted in Duke being offered the vice president position of the National Suffrage Association, which he respectfully declined. Following his death in 1905, his family continued to make donations until 1924 when Trinity College officially changed its name to Duke University in his honor.

Today, visitors to Duke Homestead can experience a “living museum of tobacco history” with may activities demonstrating tobacco farming techniques of the period. Additionally, a tour of Duke Homestead can be taken that allows visitors to gain knowledge regarding the Duke family and their contributions to local history and industry. The Duke family established North Carolina in the tobacco industry, a product that still contributes to our economy and has enriched the history of the state. Additional information about the Duke family, the American Tobacco Company, and W. Duke, Sons & Company can be found in the links below.

Tuesday-Saturday 9am to 5pm