The historic house located at 27 North Street in Plymouth, Massachusetts was the home of the Spooner family for over two hundred years. It was sold to the Plymouth Antiquarian Society in 1920 and is currently operated as a historic house museum. The Spooner family played a significant role in the industrial development of the Town of Plymouth.

The 1749 Spooner House (Courtesy of the Plymouth Antiquarian Society)

Interior, The 1749 Spooner House (Courtesy of the Plymouth Antiquarian Society) 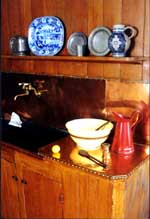 The Spooner House was originally built in 1749 for a widow named Hannah Jackson. Not long after, Ms. Jackson sold the home to Deacon Ephraim Spooner, a local merchant who fought in the American Revolution.  The house passed through several generations of Spooners before James Spooner bequeathed it to the Plymouth Antiquarian Society (PAS) in 1954 to be used as a historic house museum.  Mr. Spooner left the PAS more than the house – he also gave them a collection of family heirlooms accumulated over two hundred years.  The museum showcases authentic furnishings from the colonial era to the 20th century, as well as an enclosed “secret garden.”

The Spooners are famous for establishing the Plymouth Cordage Company in 1824.  Bourne Spooner had left Plymouth as a young man and headed to New Orleans.  There, he learned the ropemaking trade.  New Orleans was still using slave labor in many facilities throughout the city and young Mr. Spooner was an ardent abolitionist. He hated the slave trade with a passion and vowed never to use it.  He left New Orleans and soon opened the Plymouth Cordage Company on the waterfront, about two miles from where Plymouth Rock sits today.

There is also a story of another Spooner ancestor, 8-year-old Abigail, who is said to haunt the home. She died in the house in the 1700s, before penicillin could save her life.  An abscessed tooth became infected and killed her.  Now, she is said to haunt the home.  A group of construction workers was taken aback after a young girl in a white dress let them in early one morning to continue their work.  When a staff member from the PAS stopped by and demanded to know how they got into the home, they told her about the little girl.  However, they learned that the little girl that helped them that morning had been dead for over two centuries.

Recently, the Spooner House underwent an extensive renovation.  It was closed in 2008 so that staff could survey the building to determine how much work would be necessary to save the home.  They created a plan and a budget and began looking for funding in 2009.  In 2011, the Plymouth Antiquarian Society received a grant from the Town of Plymouth Community Preservation Fund to begin the rehabilitation project.  The house and garden were re-opened for public tours in 2012.

Admission to the museum is very affordable. Ticket prices are $6.00 each for adults and $3.00 each for children.  Plymouth residents and members of the Plymouth Antiquarian Society (PAS) can visit the historic house for free.