The Paul Bunyan statue provides a lens into several aspects of American history, from its passion for westward, frontier exploration, to the automobile culture and associated roadside architecture that accompanied it. Moreover, for Portland, the statue reminds locals of the longstanding lumber industry that helped make Portland grow, as well as the 1959 Centennial Celebration, for which the statute was built to commemorate that urban growth. 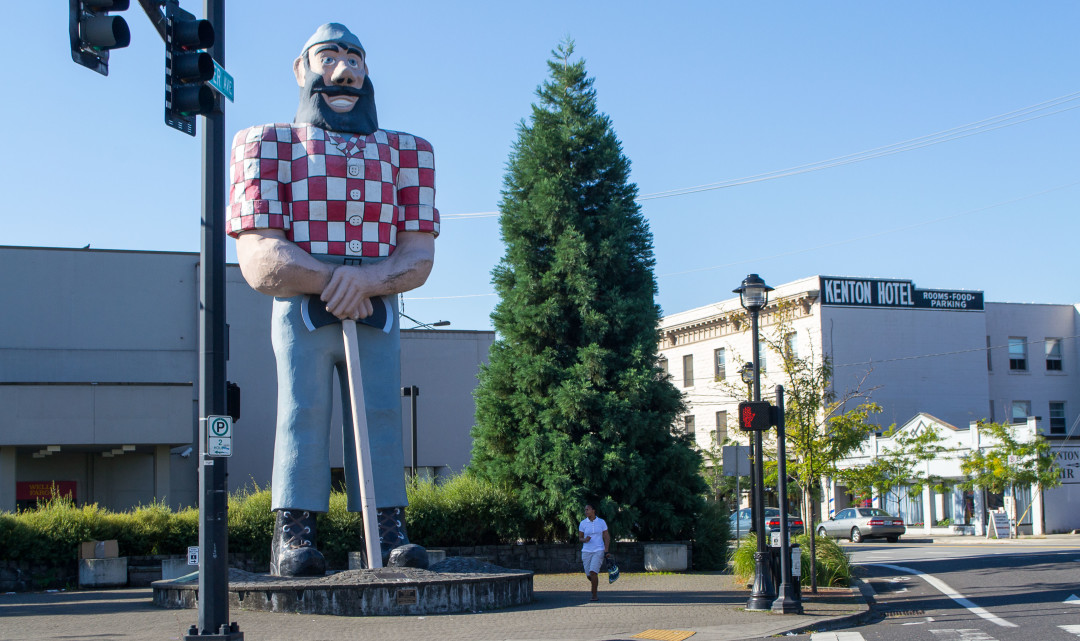 The early U.S automobile era, prior to the Interstate Highway system's construction, echoed American's longstanding cultural desire to explore, from settling the frontier to roaming the national highway system. The statue also serves as a direct link to  the need by Kenton to revive its declining economy, as well as Portland's 1959 Centennial Celebration that marked 100 years of transforming from the type of town from which a Paul Bunyan character can be associated, to a major metropolis.

First, one must discuss the legend of Paul Bunyan before discussing the meaning of the statue. Bunyan, a mythical giant lumberjack that's part of American folklore, owes its origins to oral tradition found among early North American loggers. Tales of his heroic acts in the frontier grew legendary. It was told, for instance, that he created the Great Lakes.  A writer, William B. Laughead, composed a promotional pamphlet during in 1916 for the Red River Lumber Company, which popularized the Bunyan story and helped the myth grow. The Bunyan likeness can still be found in various advertisements today, but the actual Bunyan has been the subject of numerous novels -- including children's works, advertisements, statues, parks, and more.

Although the origin of the Bunyan story is rooted in early-American frontierism, the birth of the logging industry in the Pacific Northwest allowed the story to take hold in the region.

The Paul Bunyan statue near Portland evolved towards the end of the height the era when roadside architecture was dominated by gaudy, or some might say strange and goofy, structures. Many deemed them roadside blight, and a movement arose to eradicate it from the nation's highways.

The Paul Bunyan Statue in Kenton: A brief history.

The location of the Bunyan statue in the Kenton area is tied to World War II and the During WWII the construction of Kaiser shipyard and the subsequent development of the Vanport community, which was the nation's largest wartime housing project. The result of that construction and home development led to an economic boom for Kenton. However, a disastrous flood struck the Kenton area a few years after the war, in 1948, ostensibly washing away the town.

Though the interstate highway system arrived a few years after that, the town continued to struggle because one of the area’s biggest job sources, Swift & Company, gradually depleted its workforce during the post-war era. Even before the flood, the company reduced its workforce by half, from 1800 employees ot 900. By the mid 1950s the Kenton neighborhood struggled mightily. So, in 1959, community business leaders sought means for capitalizing on the Oregon Centennial Celebration and the opening of the Centennial Exposition and International Trade Fair, which were to occur less than one mile from Kenton.

Th  Kenton Businessmen's Club formed a centennial committee who, on February 1, 1959, decided to build  a 30-foot statue of Paul Bunyan erected in the triangle intersection of N. Denver and N. Interstate avenues. The purpose of the statute involved demonstrating to visitors the significance of Oregon’s timber industry. The statue was completed and dedicated during a ceremony on June 6, 1959. The Kenton Businessmen's Club planned to dismantle the statue by Christmas, but the state of Oregon requested it remain and be utilized as a tourist information center. The statue remain there until the 1960s when increasing interstate highway construction rendered the original location meaningless for most tourists; it was moved a few miles north to to Jantzen Beach where it stayed until 2002.

In 2002, the statue was returned to within 59 feet of its original location. Today, as it was by 2002, the statue is less about functionality than it is a link to Kenton’s, Oregon's, and America’s past. The statue points to Oregon’s centennial celebration, the significance of the lumber-industry to Oregon’s past, the legacy of American expansionism and love affair with taming the frontier, and it symbolizes the pre-interstate-highway automobile era and the associated roadside commerce that emerged from it.