Fidler's Mill is a former grist mill located in Arlington, WV. Originally constructed in 1821 and rebuilt in 1847 by William Fidler, the mill served the residents of southern Upshur County for over 100 years. In addition to its purpose as a grist mill, the mill also housed equipment for wool carding and was a social gathering hall for area residents.

Photo obtained from the WV Division of Culture and History, Fidler’s Mill entry. 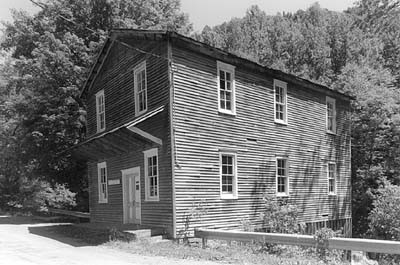 Photo obtained from the Fidler's Mill National Register of Historic Places form. This photo depicts the layout the two main floors of the mill, which housed the millstones and the wool-carding machinery. 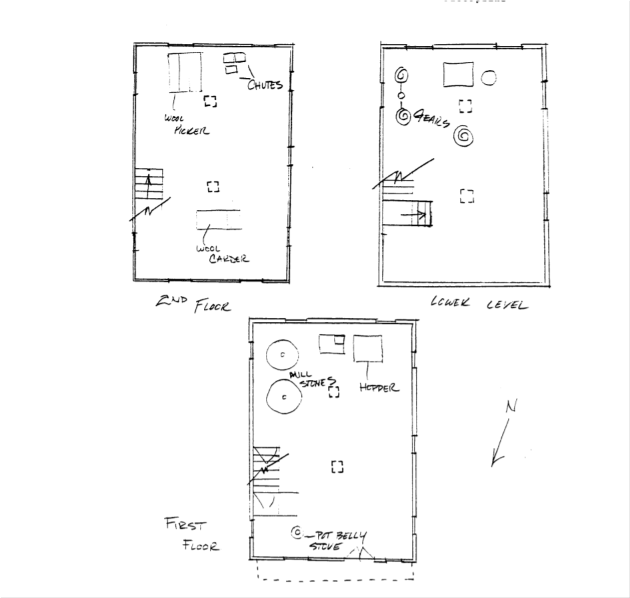 Fidler’s Mill was built by Daniel Peck in 1821 and served the surrounding communities as a grist mill. The mill was purchased, along with 200 acres of land, in 1847 by William Fidler, an emigrant from present-day Virginia. Fidler, using slave labor, enlarged the mill and added a dam upstream. The mill remained in the Fiddler family for 140 years, during which time it was used to grind flour and buckwheat.

The water-powered mill operated by using a 20-foot overshoot wheel that turned the two mill stones used for grinding grain. The mill was owned by several individuals over the years, including William Fidler’s son William Martin Fidler. He operated the mill until his death in 1901, at which time it was sold to E. G. Wilson. Wilson enlarged the mill, adding a second floor. Wilson encountered several financial hardships and eventually sold the mill back to the Fidler family. Hudson Fidler and his sons owned and operated the property for many years after.

From 1847 to 1942, the mill operated as a social gathering hall in addition to its role a grist mill. Per the National Register of Historic Places nomination, residents of the area noted that they would often socialize while they waited for the order to be finished and that a Halloween dance was held annually in the mill itself.

In 1942, the mill temporarily ceased operation when a flood washed out the dam that provided the necessary water power. After World War II, a Hammermill machine replaced water as the power source for grinding grain. The mill was sold in 1978 to the Grafton Coal Company, after mass-produced ground flours forced the mill out of business. In 1988, the mill was donated to the Southern Upshur County Business Association, which now operates the site as a community building and provides guided tours on weekends.

Fidler’s Mill has a unique architectural design, with two stories in front and facing the roadway and four stories in the rear, facing the river. The building frame is yellow poplar, with matching clapboards added over the years. Lumber for additions was produced by a sawmill adjacent to the grist mill. The original interior remains intact, and is comprised of a post-and-beam style. The leather belts from the original millstones also remain intact.

Fidler’s Mill highlights an important experience in the daily lives of many past residents in Upshur County—that of turning one’s harvest into a useable and marketable commodity. Given that Arlington is a small community, the role of the mill as a social area only increased its importance among locals. It provided not only a place to obtain needed goods (grain), but also an area to connect with neighbors, friends, and family.