A state historical landmark and listed on the National Register of Historic Places, this Gothic Revival church was completed in 1865. It was designed by Irish immigrant Patrick Charles Keely (1816-1896), a prominent architect known for his designs of monumental yet affordable Catholic churches. The grounds also include a cemetery, historical archives, a Gothic Revival style convent, and a Greek Revival rectory. Today, the convent building is home to the campus ministry center for Rutgers University students, and the rectory houses the Oratory of St. Philip Neri community of priests.

Saint Peter the Apostle Church was built in 1865 and remains one of the city's important landmarks (image from Wikimedia Commons). 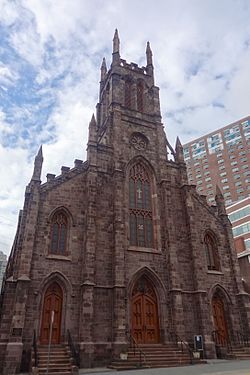 St. Peter the Apostle Church, rear, with rectory to the left (image from New Jersey Wiki). 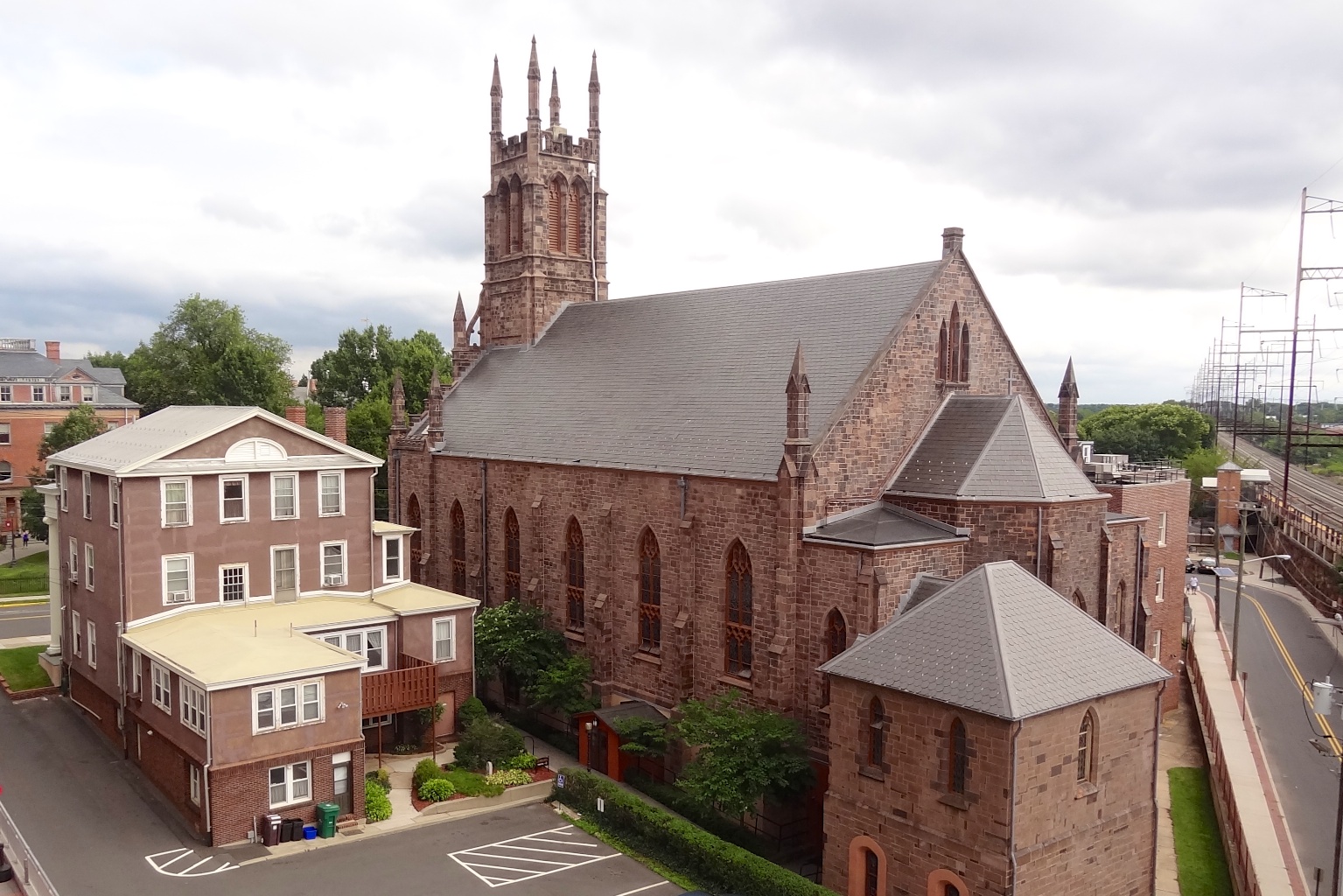 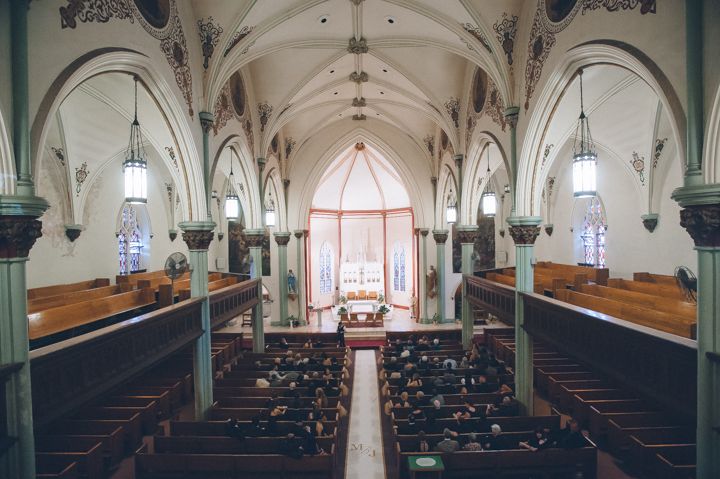 New Jersey's Catholic population in the eighteenth century consisted of only 200 French, German, and Irish immigrants. Under both British rule and the state constitution, Catholics were denied religious freedom and the right to hold political office. Anti-immigrant and anti-Catholic sentiments went hand-in-hand not only officially, but in the social sphere, as well. Nonetheless, a few Catholic churches were established in New Jersey beginning in 1814, as more Irish immigrants arrived. The first Catholic service held in New Brunswick was conducted in 1825 by Father John Powers of New York City's St. Peter's Parish. Afterwards, Father Powers offered monthly Mass in New Brunswick for about fifty Catholics, initially in a private home, then in a shop on George Street. On the instructions of John Dubois, Bishop of New York, Father Joseph Schneller took over these monthly services in 1829, and New Brunswick's first Catholic church, the simple brick structure of Saints Peter and Paul, was erected in 1831. Two years later, New Brunswick acquired its first resident priest, Father Bernard McArdle. Unfortunately, the church was severely damaged by a tornado in 1835, and the impoverished Irish immigrants it served could only afford to board up the destroyed areas of the building. To make matters worse, the growing congregation was left without a resident pastor for six years after Schneller was reassigned in 1839.

New Brunswick began the nineteenth century primarily as a shipbuilding town and a seaport for agricultural goods, but transitioned into industry as the Delaware and Raritan Canal and New Jersey Railroad, along with paper and cotton factories and sawmills, were constructed in the 1820s-1840s. The labor required for building the canal (1830-1834) and railroad (1835-1837) came largely from Irish Catholic immigrants recruited both locally and from New York City, and factory jobs provided more permanent employment to those who settled in New Brunswick. Though New Brunswick did not experience outright anti-Catholic riots as did New York, Newark, Jersey City, and other cities, Nativist (anti-immigrant) sentiment was certainly present, and poverty was rampant among the Irish Catholic population.

Thankfully, St. Peter's congregation received a new permanent priest capable of managing the poor parish finances with the arrival of a fellow immigrant, Father John Rogers, in 1845. The church itself had been foreclosed in 1844, but Rogers managed to buy it back only a year after his arrival. Under his leadership, the parish repaired the damage from the 1835 tornado and expanded the building, adding a parish school. As New Brunswick's Irish Catholic population jumped from 500 to 2,000 over the next fifteen years, Father Rogers also visited nearby towns, making St. Peter's the "mother church" of Central Jersey, even as the need for a larger church grew within his own parish.

During Father Rogers's tenure, the present St. Peter's Church  was constructed (1854-1865) across from Rutgers College on Somerset Street. The key financial contributor to the effort was Irish-American physician Clifford Morrough, who, despite being Catholic and an immigrant, had achieved status and a high-paying practice in New Brunswick since his arrival in 1847. The first Bishop of Newark, James Roosevelt Bayley, hired Irish-American church architect Patrick Charles Keely (1816-1896) to design St. Peter the Apostle. Keely had built a reputation for producing substantial, elegant churches to accommodate and inspire expanding congregations, and doing so on the tight budgets available from immigrant parishes with little capital. Many parishioners of St. Peter's, with their construction and labor experience from New Brunswick civic projects such as the canal, volunteered to excavate the basement for the church, where services began even before the upper stories were built. Additionally, fundraising efforts by the parish resulted in contributions from both Catholics and Protestants, indicating that not all New Brunswick residents resented the Irish Catholic presence.

The original Bayard Street church became a schoolhouse, and was torn down in the 1870s. Meanwhile, another Irish immigrant architect, Jeremiah O'Rourke (1833-1915) designed the stained glass for the upper level of the new St. Peter's, and probably oversaw the completion of the major construction of the church, along with local architect John B. Hall. The church continued fundraising efforts as the parish worked to finish the basement, paint frescoes, install the windows, and purchase furnishings such as confessionals, a pulpit, an organ, and a chime of bells. The Gothic Revival convent, occupied first by seven nuns of the Sisters of Charity, was constructed beside today's St. Peter the Apostle Church in 1868. The Sisters had charge of the parish school, and as the congregation expanded and rose in prominence within the community, additions to the convent eventually accommodated thirty-five nuns. The rectory, a Greek Revival home which may date to as early as 1829, was also purchased by the church in 1868, and is one of only two existing residences of its style in New Brunswick with a temple front. Like the convent, the rectory was expanded during the late nineteenth and early twentieth centuries as St. Peter's grew. By 1900, there were seven priests serving the parish. The lyceum building was added in 1920 to serve various functions for the congregation.