Rancho Los Alamitos is listed twice on the National Register of Historic Places - once as the Tongva village of Povuu’ngna, the ancestral homeland of the native people of the Los Angeles Basin and, second, for the evolution of its significant historic landscape over time. The site includes an ancient kitchen midden, a ranch house (1790-1933), four acres of lush historic gardens developed during the 1920s and 30s, and the restored working ranch barnyard of the early-mid 1900s. The site reflects this 1500-year history and the many people who have called it home. 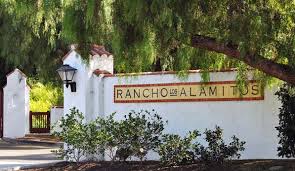 Today, Rancho Los Alamitos is 7.5 acres, a rare vestige of the original 300,000-acre Los Coyotes land concession given to Manuel Nieto in 1790 for his service on the Gaspar de Portolá expedition to California under the Spanish Crown. However, the story of Rancho Los Alamitos precedes these first newcomers, for the historic site is also part of the ancestral village of Povuu’ngna, the traditional place of origin of the native Tongva people of the Los Angeles Basin, and still a sacred place.

Nieto’s vast land holdings included 25,500 acres which in 1833 became Rancho Los Alamitos—Ranch of the Little Cottonwoods. The name suggested its most valuable asset since cottonwoods grow near water, and grew plentifully near the natural springs of Povuu’ngna below the hill. For Nieto, the land was a ranching gem and reward from the Spanish Crown. Subsequent owners Governor José Figueroa and Yankee Don Abel Stearns saw the site as a smart investment and perhaps a haven away from rough Los Angeles. To generations of the Bixby family, the ranch’s last private owners, and the workers, tenant and lease farmers who worked there, Rancho Los Alamitos was an enterprising ranch that would endure for almost a century through the rise of modern-day Long Beach.

From the time of ancestral Povuu’ngna through the Spanish-Mexican era of land concessions and grants native workers fueled the Alta California economy. In turn, the early American era owners of Alamitos, like other Yankee dons throughout the state, relied on successive workers from the U.S., Europe, China, and Japan to cultivate fields and raise livestock, and in the twentieth century, depended on labor from Mexico as well as Belgian tenant and Japanese lease farmers. During the 1880’s booming real estate, 5,000 acres of Alamitos land were developed, and by the early twentieth century, Alamitos oil subsidized the remaining 3,600-acre ranch, but the Black gold flowed over open space into rampant urban growth.

In 1968, the children of Fred and Florence Bixby, the last private owners, donated the family ranch to the City of Long Beach, transforming what had been a working ranch to a public oasis and setting the stage for what Rancho Los Alamitos is today—a place for all time and for everyone.