This 1793 mission is one of the oldest structures in Albuquerque that is not only still standing, but still active in its operation. This is the second building to represent San Felipe de Neri, when the first, built in 1719, collapsed after a heavy rainstorm in 1792. Throughout the 1800s, the church-mission was expanded to what it looks like today. It is the centerpiece to Old Town Albuquerque. 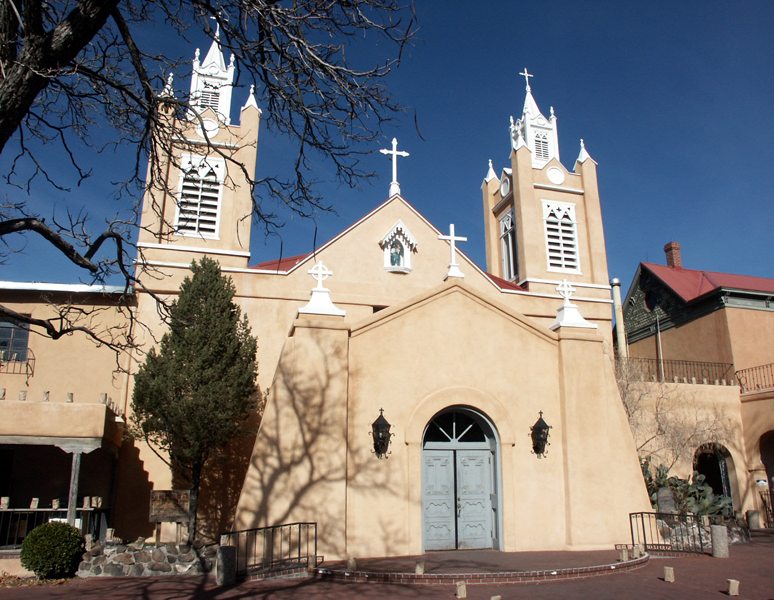 Sign near church where first church building for the city was located and when it was constructed. 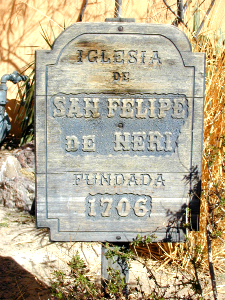 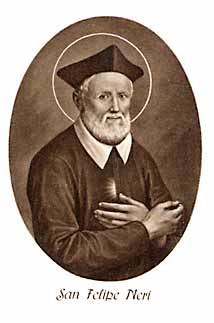 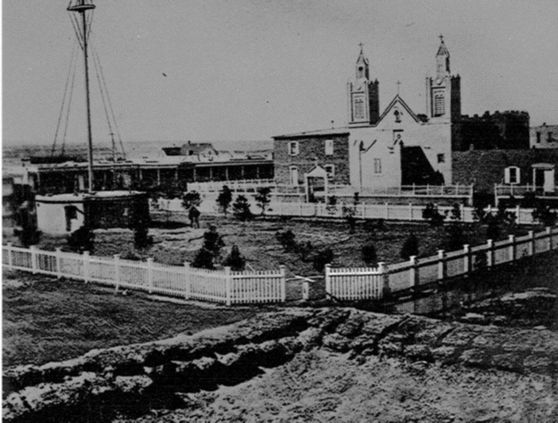 San Felipe de Neri Church is a historic Catholic church located on the north side of Old Town Plaza in Albuquerque. Built in 1793, it is one of the oldest surviving buildings in the city. Originally, Don Francisco Cuervo y Valdez named the church San Francisco Xavier, after the Viceroy of New Spain. Shortly afterward, The Duke of Albuquerque changed the name to San Felipe, after the King Philip of Spain. San Felipe de Neri was established in 1706 under the direction of Fray Manuel Moreno and initially stood to the northwest of the Plaza. The original building was completed in 1719. The original church building collapsed in 1792 after a heavy rain and was replaced by the current structure the following year. The towers were added in 1861, a parish school was constructed in 1878, and a convent for the Sisters of Charity was built on the west side of the church in 1881. Today the church complex is about done with the extensive renovations inside and out.
Further information provided by San Felipe de Neri Parish site:

"The original church of San Felipe de Neri was started in 1706 under the direction of Fray Manuel Moreno, a Franciscan priest who came to Alburquerque [the spelling was later changed to Albuquerque] with 30 families from Bernalillo in 1704 or 1705. The church was initially named San Francisco Xavier by Don Francisco Cuervo y Valdez, who founded the city of Alburquerque and named it after the Viceroy of New Spain. The Duke of Alburquerque ordered that the titular saint be changed to San Felipe de Neri in honor of King Philip of Spain.
A written account dated 1715 chronicled a convicted criminal en route to exile (in El Paso) who took sanctuary in the church. By 1718-19, the first church was completed; it stood on the west side of the town plaza, north of the current Basket Shop. The cemetery was east of the church, and the convento (rectory) was to the south.
During the very rainy summer of 1792, the old church collapsed. The church that now stands on the Old Town Plaza was constructed the following year. This church, in the shape of a cross, was constructed of adobe; the walls are 5 feet thick. A one-story convento for the Friars was added on the east side and the westernmost room of the structure was a sacristy.
In 1817, the administration of the parish was assumed by diocesan clergy. The Franciscans were asked to leave after Mexico won its independence from Spain in 1821. One notable figure of that time was Father Jose Manuel Gallegos, who arrived in 1845. Father Gallegos studied in the Taos Seminary under Father Antonio Jose Martinez. He later became a politician and served in the territorial assembly and in the territorial council during American rule.
A French priest, Father Joseph Machebeuf, was named pastor of Albuquerque by Bishop Lamy in 1853. Around this time, San Felipe de Neri was remodeled with a new roof, altar, and pulpit.
During the time of the Civil War, a sketch done by a Confederate soldier showed the two towers that had been constructed in 1861. Subsequently, the Union forces recaptured Albuquerque after the defeat of the Confederates near Pecos. The Union army leased the rectory of San Felipe de Neri for several years after the war.
Jesuit priests from Naples, Italy, came in 1867 at the invitation of Bishop Lamy. The Jesuits oversaw a major facelift to the church and adjacent buildings. In 1878 they built a school for boys on the northwest side of the church. At the same time, the land to the east was enclosed for a playground, stable, and corral. Today, the former school building is leased for use as retail shops.
A two-story convent was built on the west side of the church in 1881. Sisters of Charity, who staffed the parish school, occupied the convent until the late 1970s. In 1890, the Jesuits built a portico around the inner courtyard, a second story to the rectory, a 30-foot porch, a decorated gable above the front door, and a "widow's walk" on the pitched roof.
The church was the most elaborate building in the area and became the social center for the entire community.
San Felipe underwent renovations again in 1916. The inside was painted, a pressed tin ceiling was added, and a new wood floor was laid.
In late 1965, the administration of the church, rectory, school, and convent was returned to the clergy of the Archdiocese of Santa Fe, and, after 98 years of service, the Jesuits left Old Town.
Except for its tin ceiling, brick floor, and south entrance, today's church is the same structure as in 1793. In 1995-96, the roof of the rectory was restored to the original look given by the Jesuits in 1890. The new pitched tin roof has a decorative gable above the front door and a "widow's walk."
As the new millennium dawned, San Felipe de Neri Parish began a major restoration project. In the first phase, the exterior and roof of the church were repaired and refinished. In the second phase, the interior of the church was refurbished. In the third phase, now under way, the offices and the parish hall are undergoing significant structural repair and remodeling. Contributions to the Arise and Rebuild Fund may be sent to the parish office, and they will be greatly appreciated."