207 E German St. Built in 1865 by Dr. John Reynolds who served the town as a doctor for more than 40 years. As town mayor 1860 to 1862 he had to deal with a dangerous situation when unknown persons on the Shepherdstown side fired at Union pickets across the river, drawing a protest and threat from authorities on the Union side. Reynolds’ wife Katherine led a community fundraising drive for the town hall attached to McMurran Hall in 1889. The building was later named in her memory. 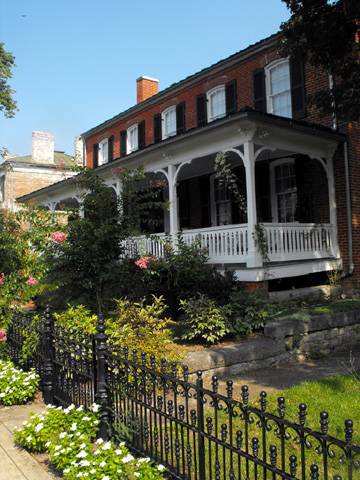 The coming war created numerous exaggerated rumors that had the citizens worried about their safety. In 1859, Dr. Reynolds organized a patrol of five squadrons to “guard the town during the night.”[1] The next day, news came that “a band of insurgents and negroes, headed by Capt. Cook, were proceeding up the river to make a descent upon Shepherdstown.”[2] A company of the towns oldest citizens, led by Colonel Charles Harper, marched to down the river to disperse the insurrectionists. On their march, they passed a canal boat that informed them that the insurrectionists had already fled and were pursued by the military. The next morning, the Hamtramack Guards returned to the cheers of the Shepherdstown people for their bravery against the insurrectionists.[3]