This magnificent monument of Albuquerque's founders stands near where it is said he announced his intention a settlement to be established while traveling through Spain's northernmost colonies (New Spain) in 1706. Cuervo y Valdez would found more settlements throughout what is now New Mexico before his death in 1714 in Mexico City. Albuquerque erected this monument in 1988. Unfortunately, vandals recently took the head of the monument. 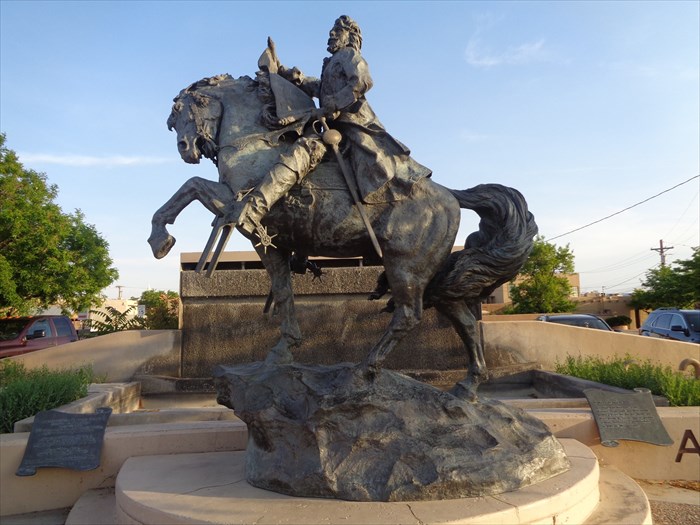 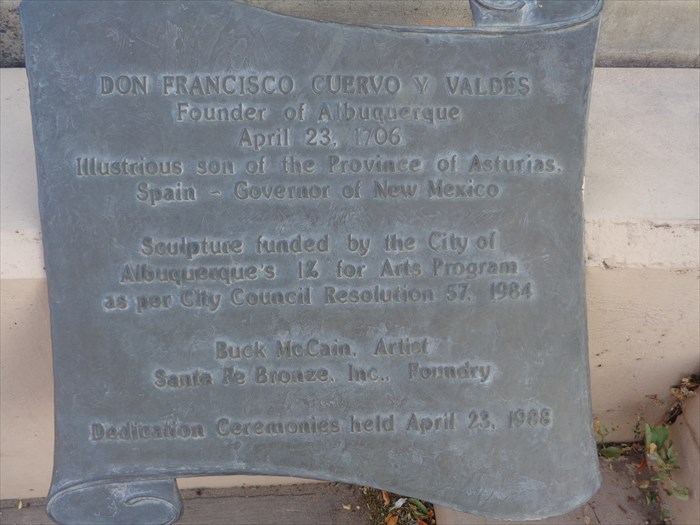 Don Francisco Cuervo y Valdés was born on June 16, 1651, in Santa María de Grado (in Asturias, Spain). His family was of noble background. Cuervo y Valdes was a Knight of Santiago and a Treasury official in Guadalajara. He emigrated to Americas in 1678.
There, he was infantry captain and lieutenant governor in Sonora. In 1698, Cuervo served also as lieutenant governor of Nuevo Leon and Coahuila (both located in the modern Mexico). He served also as the third governor of Spanish Texas from 1698 to 1702.
Under his administration, a series of missions were founded: On October 26 of that year, Cuervo y Valdés (with Friar Francisco Portoles) founded the mission San Antonio Galindo Moctezuma. On 18 December of that year, the mission of Valle de San Bartolome de Jesus (which more late was named "Santísimo Nombre de Jesus de los Peyotes") was founded by the Sergeant Mayor Diego Ramón. On June 24, 1699, the mission of San Juan Bautista and the valle of Santo Domingo, near Sabina River, were founded. In 1700 the mission of San Francisco de Solano was founded by Antonio de Olivares. The mission of San Bernardo began in 1703.
However, in 1704, Cuervo was appointed acting governor of New Mexico by the Viceroy of New Spain, Don Francisco Fernández de la Cueva Enríquez, Duke of Alburquerque. Thus, Cuervo y Valdés had to leave the government of Coahuila, taking office on March 10, 1705.
Arriving in the province, Cuervo y Valdés found that social and political conditions in the area were very poor. The continuing war between the Apaches and Navajos against the settlers and Pueblos (who were allies of the Spanish), as well as their common assault on the peoples of the province had created those problems. Cuervo y Valdes led troops against Apaches, but the number of soldiers was very small to defend whole territory. So, he sent a letter to the Viceroy asking for reinforcements, but he did not attend the request. Shortly after, he asked help the Puebloans, who accepted join to his troops. The soldiers needed clothing and supplies. The governor asked the viceroy for weapons, ammunition and clothing. However, the viceroy sent only a small amount of weapons and ammunition to New Mexico.
On April 23, 1706, Cuervo y Valdés founded "La Villa Real de San Francisco de Albuquerque" (formally Albuquerque) and named the town in honor of the Viceroy. Cuervo y Valdés ordered that a Spanish garrison be established in the city, and it was inhabited by thirty or thirty-five families. The families settled in a piece of land located along the Rio Grande.
Cuervo y Valdés refounded several areas in New Mexico, including Santa Maria de Galisteo (formerly known as Santa Cruz), which was populated by about eighteen families from Tanos. He left office in 1707. Cuervo y Valdés died in Mexico City in 1714.