The last half of the 19th century saw tremendous growth for Portland, notably during the last two decades when the population soared from roughly 17,500 to 90,426. As a port city, much of that growth occurred concurrent to a growth in international shipping and railway transportation. As a result a need for a customs house arose. Construction on this building began in 1898 and finished in 1901. It functioned as a customs house until 1968. 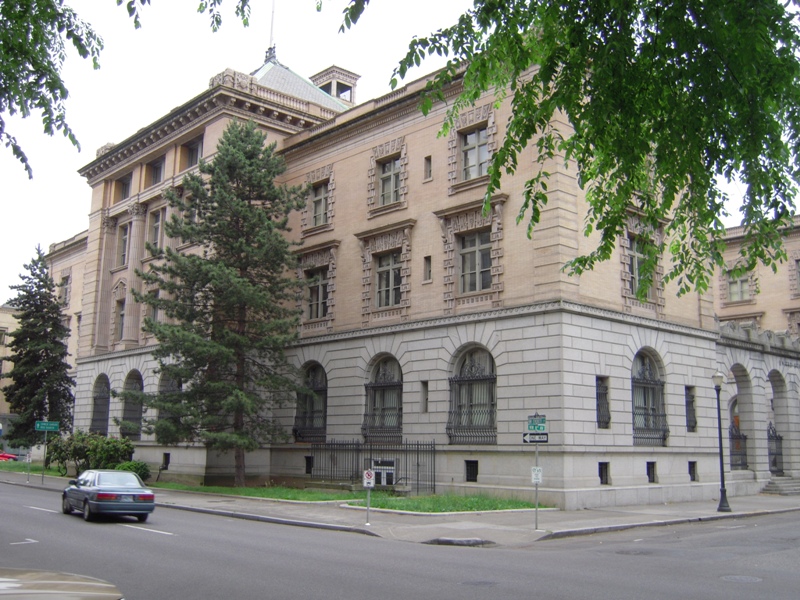 The last half of the 19th century saw tremendous growth for Portland, notably during the last two decades when the population soared from roughly 17,500 to 90,426.  That population boom occurred concurrently with an economical, commercial, and construction boom -- the city matured quickly. The US Custom House, which opened in 1910,  reflects that growth as the U.S. felt the need to accommodate the city’s escalating status, shipping prowess, and financial prosperity
As is the case with many cities dotting America's 21st-century landscape, Portland grew to prominence during the last half of the century, as seen by this table.
Portland, Oregon: Population, 1850-1900

1850: 821
1860: 2,874
1870: 8,293
1880: 17,577
1890: 46,385
1900: 90,426
For ocean port cities like San Fransisco, Portland, and Seattle,  not only did trains provide a link to the nation, shipping provided a link to the world, hence the need for a customs house for which government officials could process goods imported and exported to and from the U.S. through Portland.
In 1875, the U.S. Customs Service first established an office within Portland's new U.S. Post Office. However, as the city grew, and trade to foreign nations increased, the U.S. Customs Service outgrew that original space. Hence,  in 1898, construction began on the present U.S. Custom House, reaching completion in 1901.
It functioned as a customs house through the 1960s. In 1938, continued growth inspired the construction of fourth floors, which were added to the building's east and west wings. And then, in 1968, the history of the U.S. Customs Service came full-circle; the moved into the Old Post Office Building. The North Pacific Division of the U.S. Corps of Engineers moved into the building left by the Customs Service.