The story of the Ratcliffe implement and automobile dealership involves three locations on the block of 2nd Street between College and F streets. In 1917, the original C.A. Ratcliffe & Son building was torn down and a new brick building facing 2nd Street was erected.

This new building had a spacious auto showroom and a fuel pump out front. Sales of new and used cars became a larger part of the Ratcliffe business during this period. Son, Mark Ratcliffe, joined the business as a car salesman. 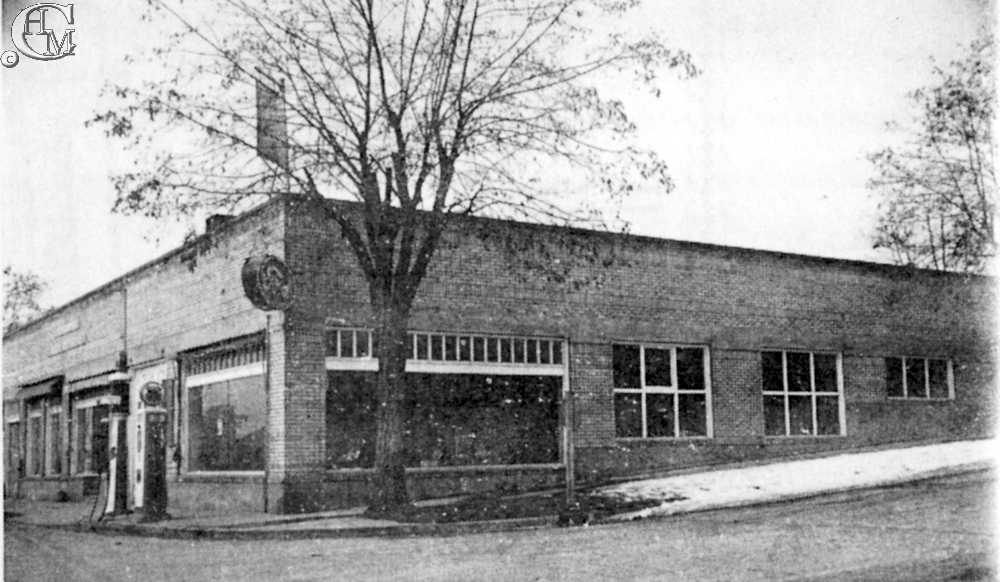 Charles Ratcliffe, at left, in his office with a salesman 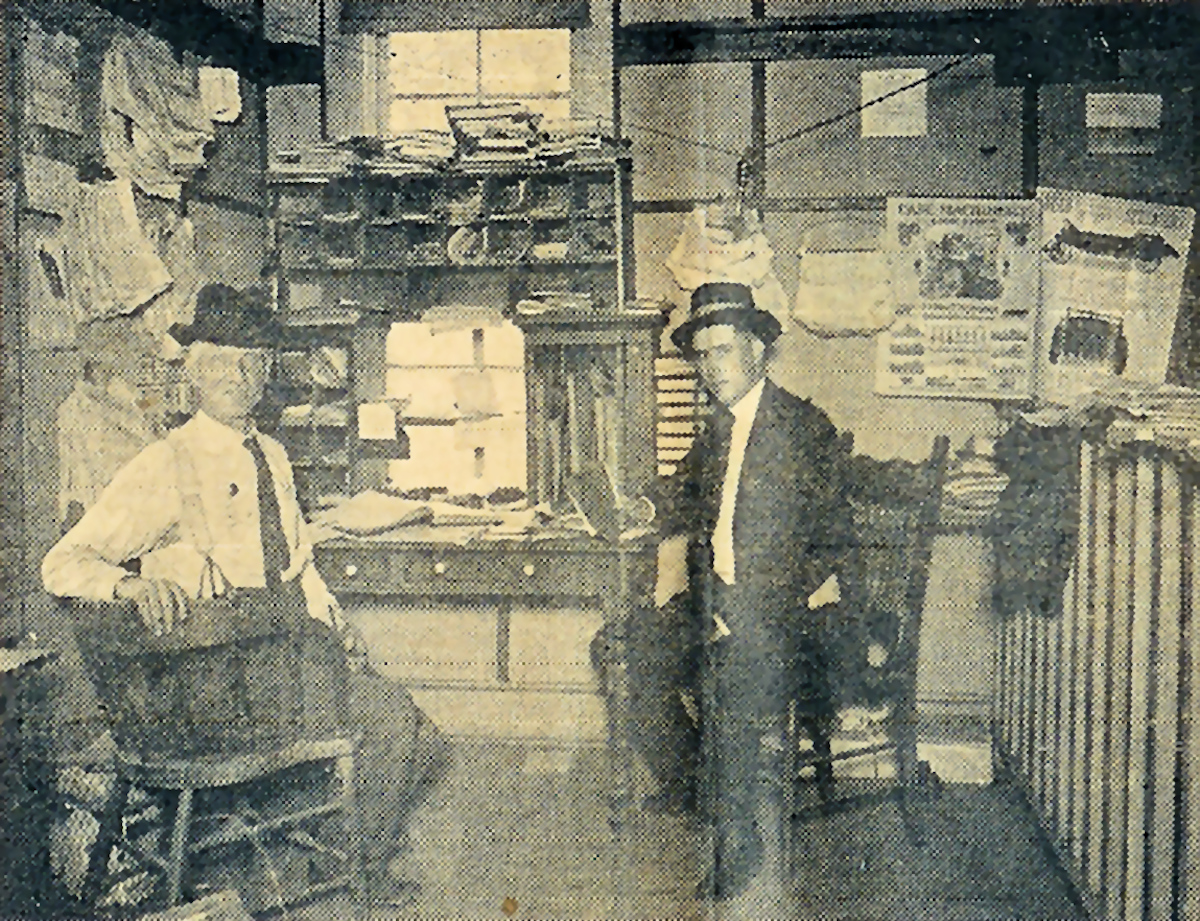 Case tractors and plows on display 1920 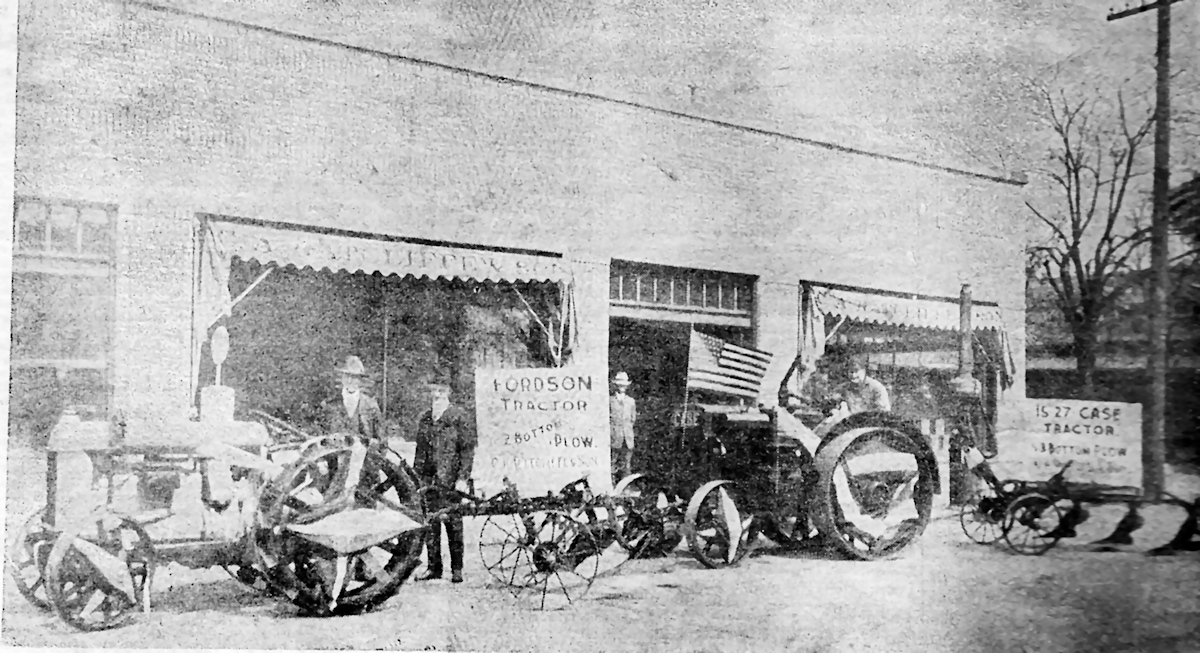 1933 Gov. Clarence Martin behind the wheel of the 20 millionth Ford

Listen to a narration of this entry's description by Joan Mamanakis.

The building had a recessed entry centered on the right half of the building. The entry was flanked by two large windows. As was the fashion of the times, there was a row of small paned windows above all of these.

Left of the entry were the business and sales offices. The second floor above housed a women's "rest room" or lounge

"designed for the comfort of women shoppers visiting town and patrons of the company while awaiting repairs to their cars."

Adjoining this was a women's lavatory

"where the dust-begrimed may remove the stains of travel and freshen themselves for the remainder of the journey."

The right side of the building held the automobile showroom. There was a storage space for 35 vehicles behind this. Along with the large windows facing Second Street was another large display window faced College with small glass panes above. Out front on 2nd Street was a curbside fuel pump.

The left side of the building was the farm implement showroom. To the rear of that was the repair shop. Windows along the west side provided natural light into the repair shop.

Across Second Street there was a shed for more implement storage. The large used car lot was also on the south side of 2nd Street.

A later addition on the southwest side matched the initial design but was constructed of concrete. This may have been when the building was coated in stucco, giving a uniform appearance to the business.

After completing college, Charles' youngest son, Mark Ratcliffe joined the company as a salesman in 1923. Like his older brothers, he too had helped to deliver lumber prior to officially joining the firm. That same year, J.I. Case Company bought out Grand Detour Plow of Illinois and this added a new line of plows and some other implements to the company's lines. Case took over Emerson-Brantinham in 1928 and additional implement companies in the 1940s, giving Ratcliffe a complete line of farm equipment, including tractors.

"the courtship started when I bought a car, a used Dodge coupe — from the young salesman at C.A. Ratcliffe Company. He did not own a car, so our courting was done in my car. We were married [in 1927] shortly after I made my last payment, and we went on our honeymoon trip in that car."

When they returned home, Mark sold her car and they did not own another one until shortly before they moved to California in 1970, when Mark purchased his first car from Ron Rehn and Don Helm at Ratcliffe Ford, a 1971 LTS.

Back in 1925 son, Kent Ratcliffe made the local newspaper, when he was said to have set a record for travel of 10 hours and 8 minutes from Seattle to Cheney in his Ford coupe. In those days, highways were gravel roads at best.

Charles Ratcliffe was active in the business for 47 years, retiring a year before his death in 1931. His son, Lynn managed the implement side of the business, while younger brother Mark became manager of the auto dealership.

In 1933, the Ford auto company celebrated the production of 20 million automobiles by visiting dealerships around the country, including Cheney. Governor Clarence D. Martin, visited his hometown for the event, even taking the wheel of the special car.

The company saw its greatest period of growth in the 1940s, motivating the Ratcliffe brothers to split into two companies in 1948 with Mark Ratcliffe heading the Ratcliffe Company Ford auto dealership and repair garage while Lynn Ratcliffe became president of the Ratcliffe Implement Company. The company that had started as a mostly one-man operation under Charles A. Ratcliffe in 1884 had grown into two businesses with a total payroll of over thirty.

The brothers agreed it was time to modernize the dealership.