Established in 1968, the Museum of Contemporary Art is Northeast Ohio's only museum dedicated to contemporary art. 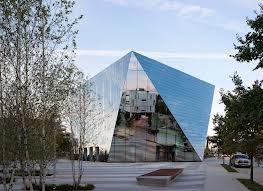 The Cleveland Museum of Contemporary Art, originally called “The Gallery,” was founded by a small group of women 1960s, including Agnes Gund, Marjorie Talalay, and Nina Castelli Sundell. Talalay had previously run an art gallery in New Haven, Connecticut, and Sundell’s father and his ex-wife were both influential art dealers. The contemporary art gallery, which featured prints by Andy Warhol and props from the performances of Robert Rauschenberg, was unlike the more traditional art museums of Cleveland. Because of this, Talalay and Sundell had trouble selling the art at first.

After Sundell’s departure in 1973, Talalay transformed the Gallery into the nonprofit Cleveland Center for Contemporary Art. In 1987, it moved from its original location in a former frat house in University Circle to leased space in the Galleria downtown. It remained there until 1990 when it moved to the second floor of the Cleveland Play House complex. The 1990s saw a steep decline in attendance and the retirement of Marjorie Talalay in 1993. She was replaced temporarily by Australian art historian Gary Sansgter.

In 1996, Jill Snyder took over the museum and renamed it the Museum of Contemporary Art Cleveland. Her leadership in choosing new exhibitions and programs helped attendance rise to about 20,000 visitors per year. In 2012, Snyder became successful in her goal to move the museum back to University Circle. The new 34,000-square-foot building was designed by architect Farshid Moussavi and completed at a cost of $27.2 million. It was Moussavi’s first museum as well as her first project in the United States.