The Almaden Quicksilver Mining Museum is located in the historic Casa Grande House (Spanish for "the big house"). Inside, visitors will learn about the mining history of the Almaden Quicksilver County Park and the technology used to extract the mercury from the red cinnabar rock found in the mines (mercury, which was discovered here in 1845, was used to extract silver and gold from ore; this was of course long before people realized how dangerous the metal could be). Visitors will also learn about the diverse mix of Cornish, Mexican, Chinese and other cultures that comprised the mining communities. The museum opened in Casa Grande in 1998.

The Almaden Quicksilver Mining Museum is located in the Casa Grande House, which was built in 1854. 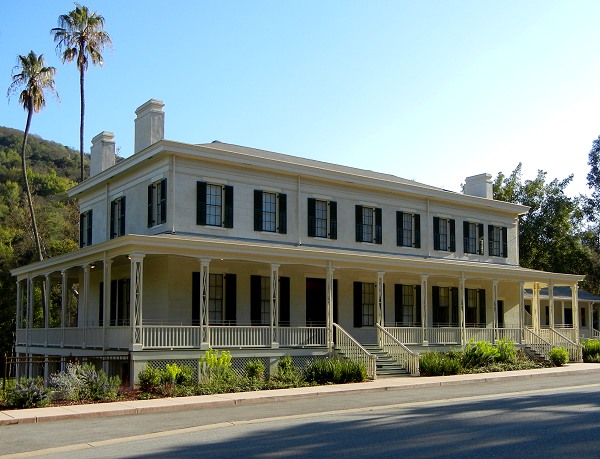 The New Almaden mine is the oldest, and arguably the most productive, U.S. Quicksilver (mercury) mine. Its history is attached to the development of the west, notably in regards to the California gold rush. Though Quicksilver mining has long been overshadowed by the history of gold and gold mining, the two mining histories are significantly intertwined. Processing gold depended on the availability of mercury and, fortunately for miners,  California's mercury ranges -- a rare find, globally -- were located in the San Francisco Bay area close to the state's gold mines, allowing those in the mercury business to realize vast profits.
The New Almaden history pre-dates the famous California gold rush by a few decades. Mexican settler Antonio Sunol discovered ore deposits here in the 1820s, which were identified as Quicksilver by Mexican Army officer Andreas Castillero in 1845. In fact, even before that, the Native American Ohlone nation used the area as a source of the red mercury-bearing rock, cinnabar. They painted their bodies a bright red with the cinnabar and also found it an essential item to trade.
Before mercury had been discovered in California,  two mines, located in Spain and Slovenia produced most of the global supply. As a result, the Spanish ostensibly had a monopoly on the mercury trade. However, in 1815, the Spanish passed control to Baron, Forbes & Company, a British trading company who later, along with the backing of by American capital, developed the Hacienda Nuevo Almaden between 1846 and 1849 (the year California gained statehood).
Before industrial (corporate) mining dominated the gold rush, private gold miners mostly dug for gold near the surface. However, mercury mining took place underground and significant capital investments. Despite the costs, Quicksilver/mercury mining proved to be extremely lucrative as long as miners continued to refine gold by relying on mercury amalgamation, which had been used worldwide since the sixteenth century. And the industry became even more profitable when mercury was also discovered in Napa and Sonoma after the Civil War.
In fact, New Almaden mines accounted for nearly $70,000,000 in quicksilver mining, a fortune more significant than any California gold mine produced during the mid- and late-nineteenth century in California. California's business elite enjoyed the vast majority of wealth in the nineteenth century, notably those in the banking industry who also controlled most of the Quicksilver and gold mines, as well as the railroads connecting California to the rest of the United States. As per the norm in that era, laborers -- often immigrants -- worked hard for little pay and faced the added danger of exposure to deadly mercury fumes.
New Almaden essentially enjoyed three separate enclaves: Spanishtown, the Hacienda, and Englishtown. The Hacienda settlement arose near Alamitos Creek during the 1850s. By the 1860s, English miners established Englishtown. Finally, during the 1870s and 1880s, Chinese immigrants arrived in New Almaden to work as miners, cooks, and launderers (though they did not truly establish a separate enclave).
Captain Henry Halleck, the mine’s general manager during the 1850s, had the Casa Grande designed and built in 1854 by architect Francis Meyers while John McLaren, designer of San Francisco’s Golden Gate Park, designed the ground's landscaping. The building served as a personal and official residence for the New Almaden Mining Company for decades.

The dependency on mercury ended around 1890 when miners moved towards the new, inexpensive cyanide process. Thus, California's Quicksilver/mercury mines almost completely shut down, and subsequently, the history of California mercury-mining has mostly been ignored.

What can't be ignored is its environmental impact. Just as gold mining significantly altered the local environment, operation of the New Almaden Mine released copious amounts of mercury into the Guadalupe River watershed and south San Francisco Bay.  Even today, mercury levels continue to present problems and Santa Clara Valley Water District is working on plan to address mercury in Lake Almaden
Today, the Casa Grande serves as the Almaden Quicksilver Mining Museum. The mining impact proved to influence labor, immigration, westward expansion, mining practices, economics and the enviornment. The Case Grande stands as an example of Gilded Age practices that allowed banks and corporations to profit heavily while laborers worked in, often, dangerous conditions. However, it also inspired countless people to move to the area, which had a profound effect on history, including that of the Silicon Valley -- eventually.