All that remains from the heyday of the Gilroy Yamato Hot Springs Resort are some dilapidated cabins, although a few have been restored, and several other buildings in various states of disrepair. The resort began in 1865 when the land around the spring was purchased by George Roop and William Olden. During the Great Depression, it came under Japanese-American ownership, but never returned to its former glory, largely due to the internment of its owner during World War II. It has since been incorporated into the larger Henry W. Coe State Park and is now open to the public for weekend guided tours. It was added to the National Register of Historic Places in 1995.

The path that leads up to the guest cabins with a historical marker in the foreground. 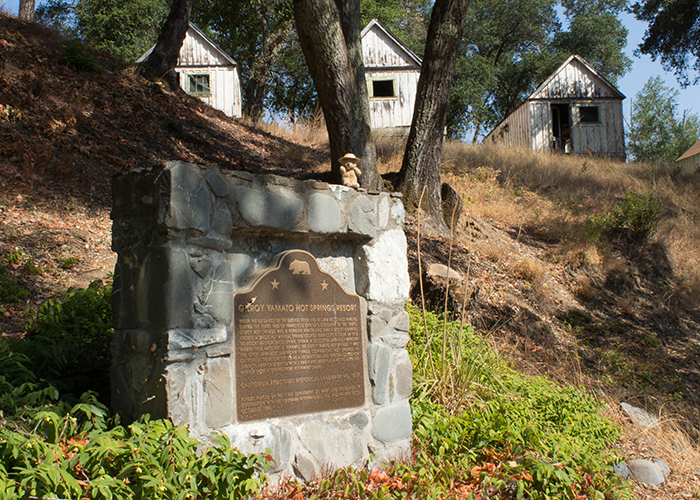 A close-up of the aforementioned historical marker. 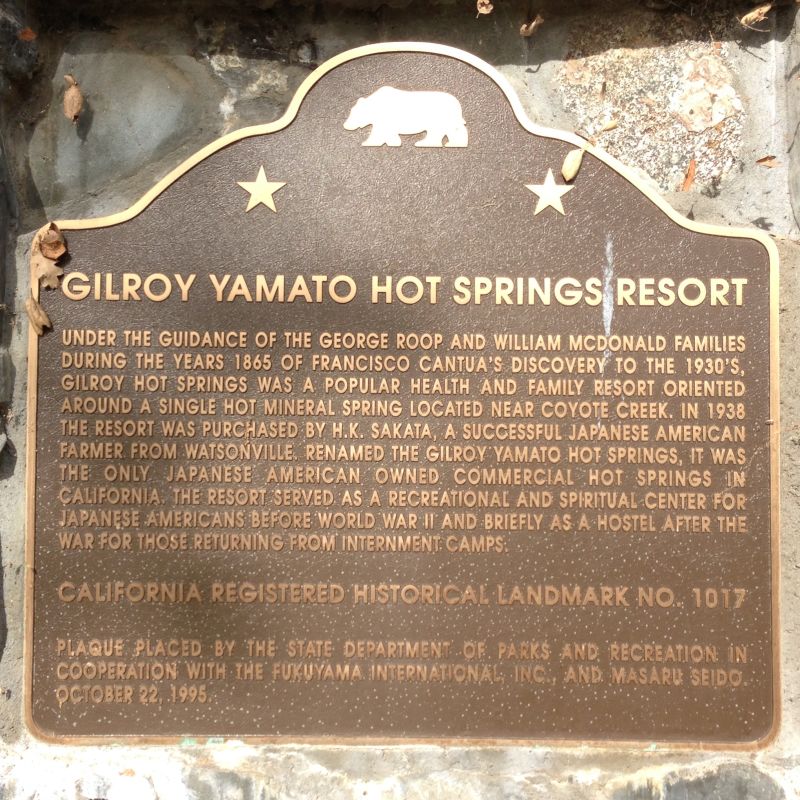 As since in this photo, the Shinto Shrine is in serious need of restoration. 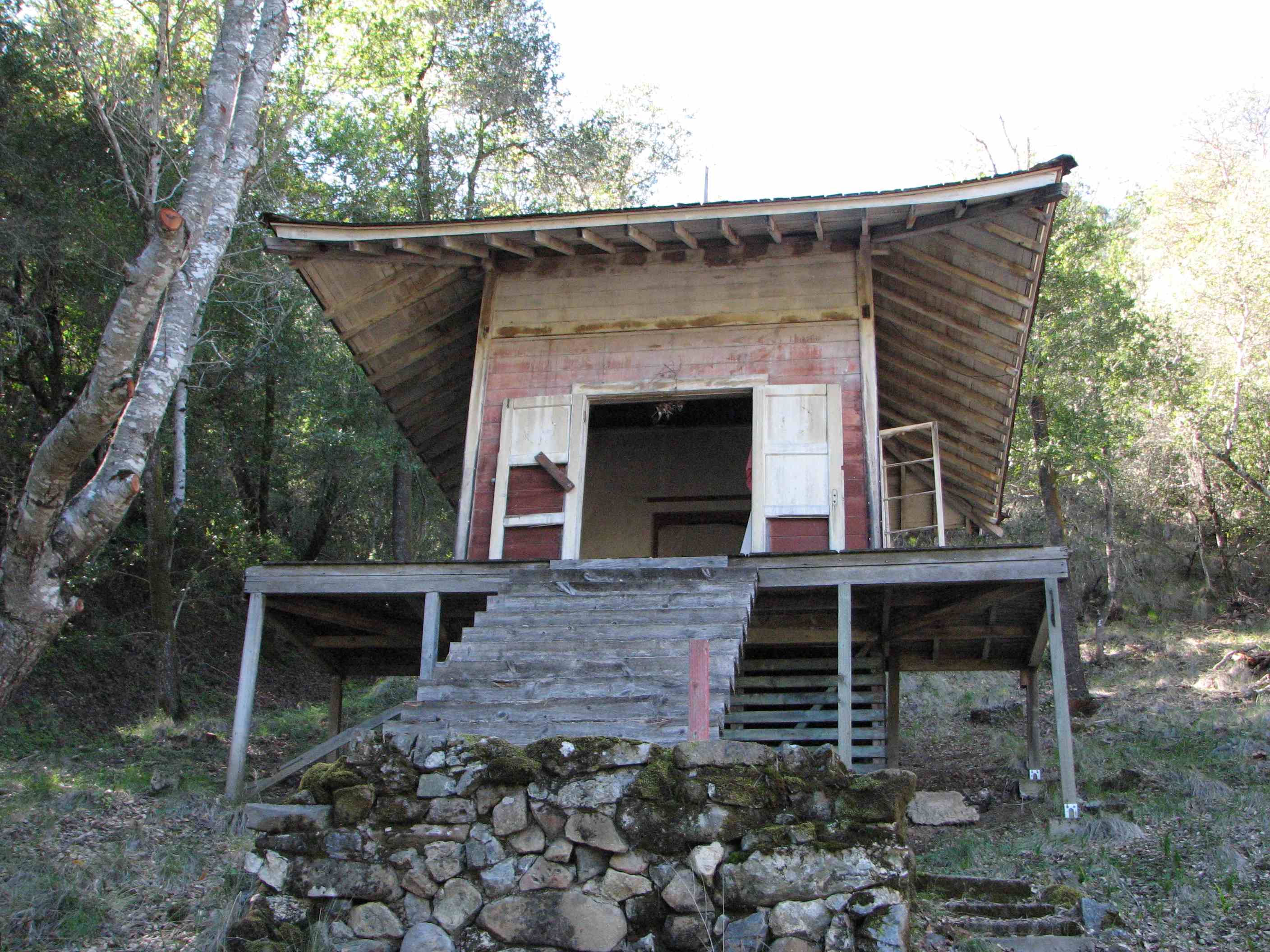 The interior of one of the guest cabins prior to renovations. 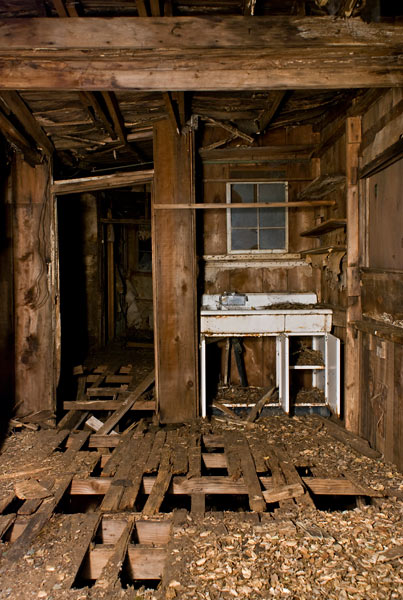 The resort's hotel in all its former glory. 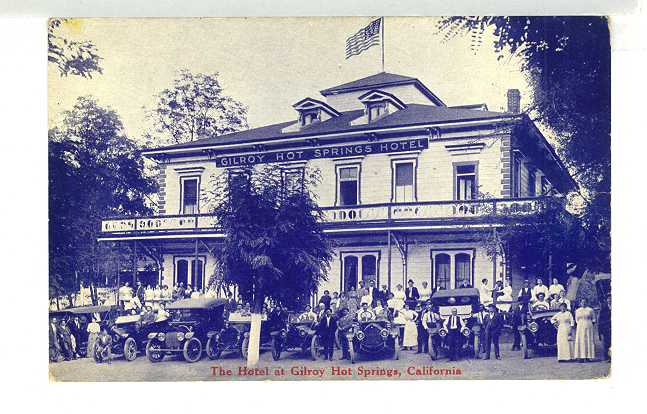 Located about ten miles northwest of the town of Gilroy, California, the Gilroy Yamato Hot Springs is adjacent to Coyote Creek.  The restorative hot spring was “discovered” by George Roop who quickly purchased the land around it and began converting the remote area into a resort. By the 1890s he had built a three-story wood frame hotel, a clubhouse, a bath house and almost 20 guest cabins.  A concrete warm-water pool was added in 1917.  The resort quickly became a vacation destination for prominent local citizens seeking the curative powers offered by the warm mineral waters.

Roop sold the resort to William and Emily McDonald in the early 1920s and they added some more guest cabins and the resort became a popular party spot during the “Roaring ‘20s.”  Due to its remote location, consuming bootleg liquor during Prohibition and partaking in illegal gambling became popular activities at the resort, as did dancing and swimming parties.  At its peak, over 500 patrons per day visited Gilroy Hot Springs during the McDonald’s tenure.

As with many businesses, the onset of the Great Depression had a profound affect on the resort.  This, coupled with the death of William McDonald and Roop’s foreclosure on the resort caused the local post office to close in 1934 and the Southern Pacific Railroad to stop service in 1935.  The resort was then purchased, in 1938, by local agricultural businessman, Kyuzaburo Sakata.

Sakata sought to turn the resort into a spiritual and therapeutic resort for the local Japanese-American community.  To that end, he added a Shinto Shrine and Japanese garden teahouse to the resort in 1939.  However, Sakata, along with thousands of other Japanese-Americans, was imprisoned in an internment camp after Pearl Harbor and the resort was taken over by local, Caucasian, business partners.  After Sakata was released in 1945, he returned to the resort and opened up its facilities to others who had suffered the same fate, but the resort never recovered.

The resort fell into disrepair by the 1960s and was sold to Phillip Grimes sometime that decade.  The clubhouse and hotel were both destroyed by fire in 1980 and the hot spring limped along as a private resort until 1988.  It was purchased by Fukuyama International Incorporated which had plans to turn it into a Japanese-American cultural and recreational center.  It was finally purchased by the California Department of Parks and Recreation in 2003 and added to the 87,000-acre Henry W. Coe State Park.  Since that time, the Friends of Gilroy Yamato Hot Springs (now simply Gilroy Yamato Hot Springs) has made strides to have the former resort restored and opened to the public.  They have renovated several cabins and now conduct guided tours and special events at the former resort.