The Congress Building is a historic twenty-one story building in downtown Miami. The building was constructed in two phases, with the first five stories in 1923 and the remaining sixteen in 1925. It features elements of both Mediterranean Revival and Chicago School architecture. The Congress Building was created amidst the 1920s Florida Land Boom, which saw the population of Miami explode and land prices skyrocket. The Building itself was built and utilized by the Realty Securities Corporation, a real estate company specializing in suburban properties. Today the Congress Building has been restored and houses apartments. It is listed on the National Register of Historic Places and has been designated a Miami historic site. 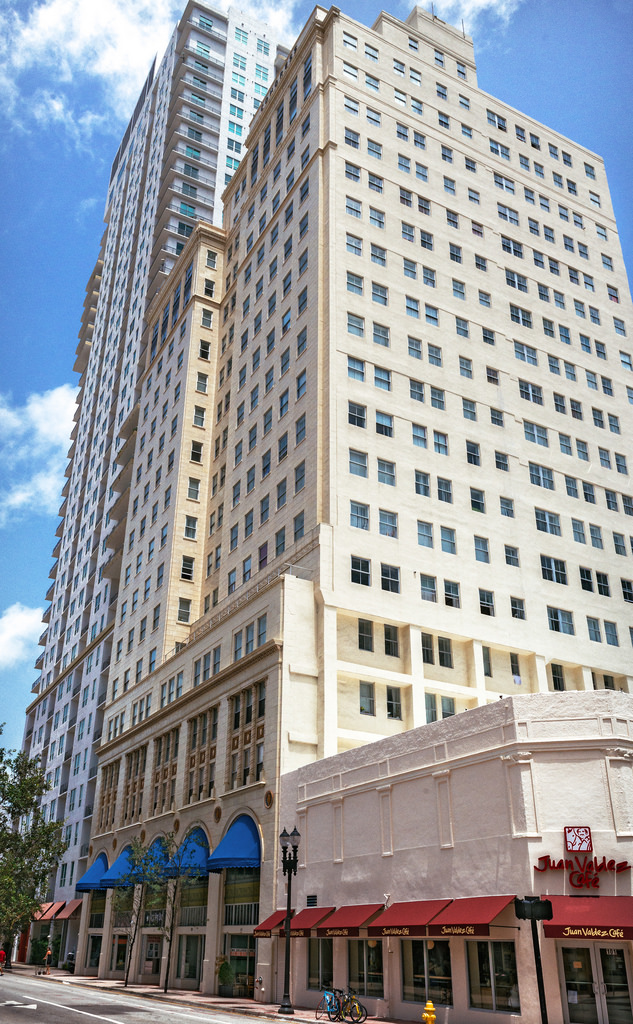 The Congress Building under construction in 1923. It was originally only five stories tall because Miami regulations banned any buildings more than ten stories tall. Image obtained from Pinterest. 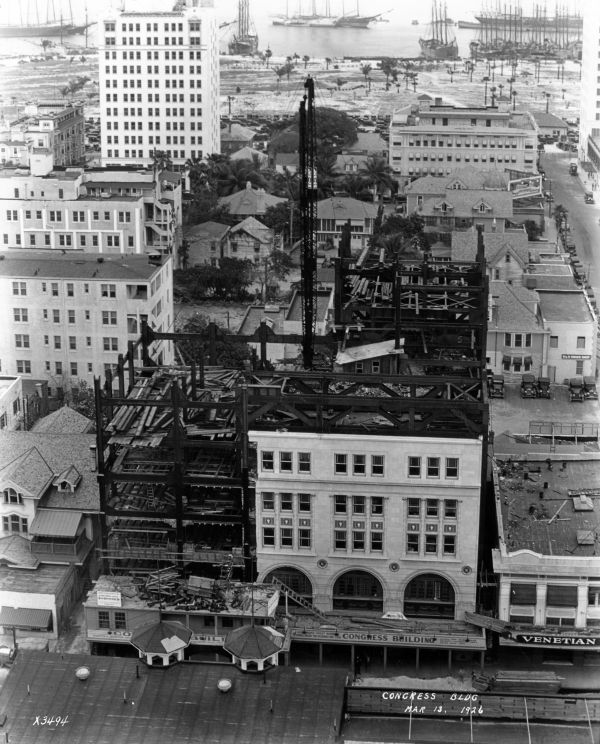 During the 1920s, Miami and South Florida experienced what is today known as the Florida Land Boom. Hundreds of thousands of Americans migrated to the Sunshine State, drawn to its warm climate and the prospect of making money from land speculation. Land was bought and sold rapidly, causing property values to rise dramatically. This pushed the City of Miami to begin constructing high-rise buildings to house offices and apartments. Even then the values of these new buildings increased; the Biscayne Hotel, for example, quadrupled in value from $225,000 to one million dollars in just five years, while the Greentree Inn skyrocketed from a valuation of $75,000 to $600,000.

In 1923, Thomas O. Wilson, President of the Realty Securities Corporation, ordered the construction of an office building on Northeast 2nd Avenue. Wilson, previously a travelling salesman in Philadelphia, created the Realty Securities Corporation in 1913, which specialized in buying and selling business properties and subdivisions. Wilson was noteworthy for developing cemeteries such as Woodlawn Park and Tampa’s Myrtle Hill Cemetery. He was also a member of the Miami Realty Board, as well as the Chamber of Commerce. Wilson dubbed the new five-story building on Northeast 2nd Avenue “The New Congress Building” and used it as the Realty Securities Corporation’s headquarters. In 1925, at the height of the Florida Land Boom, Miami ended its ten story height restriction on buildings. Soon an additional sixteen stories had been added to the New Congress Building, which now began being called simply the Congress Building.

Both the original Congress Building and the additional sixteen stories were designed by Martin Luther Hampton. Hampton was a very notable architect in the Miami area. Some of his works include the old Miami Beach City Hall, many homes in Miami Springs, and the Biltmore Hotel and Country Club. He was also part of George Merrick’s design team that created the community of Coral Gables. Hampton created the Congress Building in the Mediterranean Revival style, which was popular in Florida at the time, and also included aspects of the Chicago School style.

The Congress Building remains as an example of commercial architecture in 1920s Florida. The building was added to the National Register of Historic Places in 1985, and was designated a Miami city historical site in 2003. In the late 1990s, the building underwent restoration, and was converted into apartment units. The first floor also contains retail space.