Japantown, also known as "Nihonmachi", is a historic neighborhood bordered by First Street to the west and 8th Street to the east. The neighborhoods southern border is Empire Street and it extends to Taylor Street on the north. Japantown was originally created as an area for boardinghouses for Japanese men, just west of the "Heinlenville" Chinatown settlement. Every Sunday morning there is a Farmers' Market on Jackson Street where both locals and out-of-towners come to buy fresh vegetables, baked goods, or flowers. Given the hostility that Asian immigrants faced, this neighborhood and its institutions served an important role in preserving Japanese-American culture and protecting residents. While most of the Japanese-American neighborhoods in America were lost after the government interned people of Japanese descent in World War II, San Jose's Japantown survived and has become a diverse neighborhood and a popular place to visit.

This monument is located outside the Issei Memorial Building and pays tribute to the historic neighborhoods in San Francisco, San Jose, and Los Angeles. 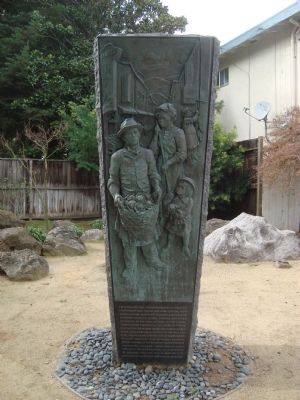 When it was first created, the residents of Japantown were largely male laborers, attracted to the area by farming and other labor intensive jobs. At the turn of the 20th century, more and more Japanese woman began to arrive as picture brides for the men, chosen based solely on a picture. As families developed, businesses grew in order to serve the needs of the growing community.

By 1941, there were upwards of 53 businesses in Japantown. After the outbreak of World War II, the Japanese population was forcibly removed from Japantown and interned in camps for the duration of the war. After the war, many of the prisoners of war resettled in the area. By the end of the decade, the population of Japanese Americans in San Jose had nearly doubled and by the 1950s and 1960s three generations of Japanese coming and going through the busy neighborhood.

Japantown is designated as an authentic ethnic neighborhood and is home to many traditional Japanese restaurants, shops, and houses. The California State Legislature designated this area as one of the last three remaining historical Japantowns in the whole of the United States with the other two being in San Francisco and Los Angeles. The figures from 2004 suggest that nearly 227,000 people resided within a 3-mile (4.8 km) radius of Japantown, of which 25% were of Asian descent.