The Pilgrim Hall Museum is located in the heart of Plymouth, Massachusetts at 75 Court Street. The original portion of the building was constructed in 1824. Several improvements were made over the years as the museum grew and the town could afford the additions. Pilgrim Hall is recognized as the oldest, continuously operating museum in the nation. It is accredited by the American Alliance of Museums and it was also added to the National Register of Historic Places in 1972. 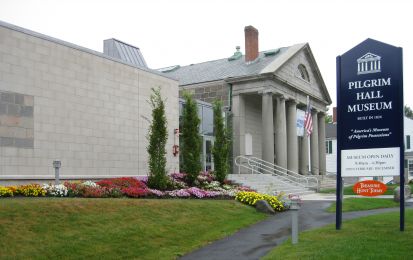 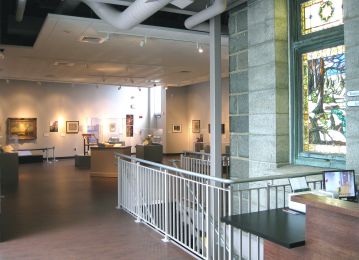 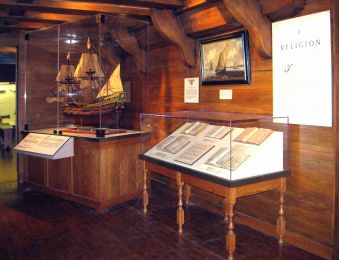 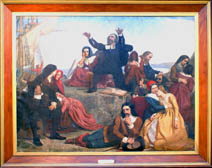 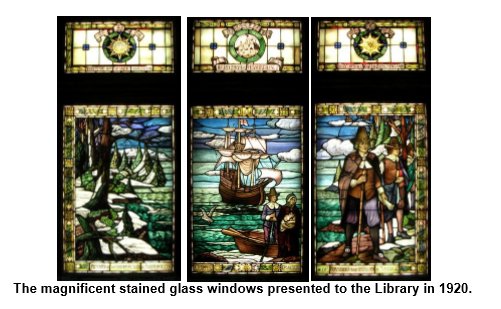 At the 200th anniversary celebration of the founding of the original settlement, also known as the second Centennial Celebration of the Landing of the Pilgrim Fathers, the Pilgrim Society was founded.  The society wished to hold annual festivities to honor the day.  The legislature passed resolutions to erect the Pilgrim Hall Museum for the celebrations, as a tribute to the area’s contribution in the first two centuries of the nation’s growth.

The original design of the Pilgrim Hall Museum was very grand.  It would cost an estimated $10,000 in 1824 to build the museum, but the town leaders felt that it was well worth the cost to preserve the settlement’s rich history.  The initial cornerstone was laid on September 1, 1824.  By the end of the year, enough of the building had been constructed for the Pilgrim Society’s use.  The first meeting was held inside their new home on December 17, 1824.

A few years later, the society began construction on the second phase of the museum.  The front portico and six fluted, twenty-four-foot-tall columnns that grace the front of the building were part of the original design, but financing for the expensive improvements ran short.  Even now, the second phase was supposed to be constructed using granite; however, the stone was too expensive and a wooden design was favored.  The building’s façade was designed by an architect from Providence, Rhode Island (Mr. Russell Warren). It was finally completed in 1834.  An additional wing for the Museum’s library was added in 1904.

The museum’s collection is dedicated to Plymouth Colony’s rich history.  There are many artifacts dating back to the early days of the settlement, including William Bradford’s bible and Myles Standish’s sword.  One of the most treasured pieces is a heroic-sized painting that adorns one of the museum’s walls: “The Departure of the Pilgrims from Delftshaven” by Charles Lucy.  At the Tercentenary Celebration of the Pilgrims’ Landing in 1920, a group called the Daughters of Founders and Patriots of America presented the Pilgrim Society with a stunning gift of stained-glass windows.  The windows are made up of three panels which depict the story of the Pilgrims’ landing.  The first is a picture of a wooded shoreline – what probably existed prior to their arrival.  The second shows a family stepping off a boat and onto the land.  The final picture represents the forefathers bringing law and religion the new colony.  The stained-glass windows can be seen in the Museum’s library.

Visitors can view the artwork, precious artifacts and manuscripts, and a short film telling the story of the Pilgrims’ voyage and first years.  There is a treasure hunt available for the museum’s younger guests.  The Museum also offers free parking, a gift shop, and full accessibility.  It is open seven days a week from 9:30-4:30, February 1 – December 30.   Pilgrim Hall even offers special programs on Thanksgiving Day.