Established as a private Catholic school on the 10th of September in 1928, John Bapst Memorial High School serves as a living monument to the history of the city of Bangor, Maine. The school was named after Jesuit missionary Johannes Bapst, whose work was central to the growth of Catholicism in Bangor. While the school was once restricted to men, it was closed and subsequently reopened in 1980 as a non-sectarian school open to all. Since that time, the school has continually grown in size and became a residential school with an international student body by 2011. As of 2017, the school houses approximately 50 international students from all over the world. The school is best-known locally for its award-winning teachers and its regular community art events including art exhibits and theater performances. 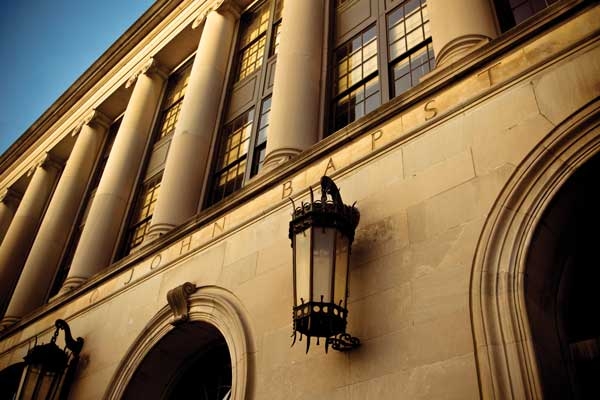 Johannes Bapst, the school’s namesake, was born in Fribourg, Switzerland on December 17, 1815.  At the age of twelve, Bapst joined the Jesuit order and was ordained as a priest in 1846. Two years later, Bapst arrived in New York and was promptly sent to minister to the Native American population in Old Town, Maine. After Old Town, Bapst went on work in Ellsworth, Maine, and then, later, to found the very first Catholic church in Bangor in the year of 1856.

Johannes Bapst’s experience in Ellsworth is well known among local historians. After making a public denouncement of local schools for requiring Catholic children to study with Protestant Bibles, the town council of Ellsworth forbid him from the town. In addition, some of the locals threatened Bapst with physical harm. In June 1851, when the anti-immigrant Know-Nothing political movement was growing, Bapst was attacked in his own home by the townspeople of Ellsworth. Two days later, he was tarred and feathered in public then ridden on a rail out of town and ordered to leave the neighborhood permanently.

This attack was met with condemnation from the rest of Maine and New England. Bapst recovered from his injuries and later went on to found the first Catholic church in Bangor. He also became the first President of Boston College.

Today, Bapst's former school prides itself on its higher-than-average student standardized test scores, its high percentage of Advanced Placement enrollment, and its faculty achievement. Teachers such as Brendan Murphy have received accolade for worldwide achievements; Murphy was awarded the College Board’s Top New England Educator award for his exemplary teaching in Calculus and Statistics, which included the instruction of teachers in nearly every continent on Earth.  Additionally, the school has been repeatedly recognized by Siemens and the College Board for STEM achievements.

As for community involvement, Bapst’s influence has historically been strong in the arts.  The school hosts two public art exhibits each year, and the performance bands have reached national recognition on numerous occasions, notably performing for the first homecoming return of Gulf War troops in 1991 and the Inauguration of President Bill Clinton in 1997.  The school records that over a third of the student body is involved in one or more of their music programs.  Additionally, the school participates in 16 competitive sports.