Established in 1804 in Ames Township (now Amesville), Ohio, the Western Library Association, or Coonskin Library as it was more popularly known, was borne from pioneers' desire for books and education as they settled in Ohio. However, the general lack of currency meant that the accumulation of pelts (mainly raccoon pelts) funded the acquisition of 51 titles to start the library's collection. Dissolved in the 1860s, the library's collections have been split between libraries in Columbus and Athens, Ohio.

This is the cover of the Western Library Association's record book that Sarah Cutler refers to in her work and is an important primary source in hashing out the dates of the library's founding. Photo courtesy of the Ohio University website. 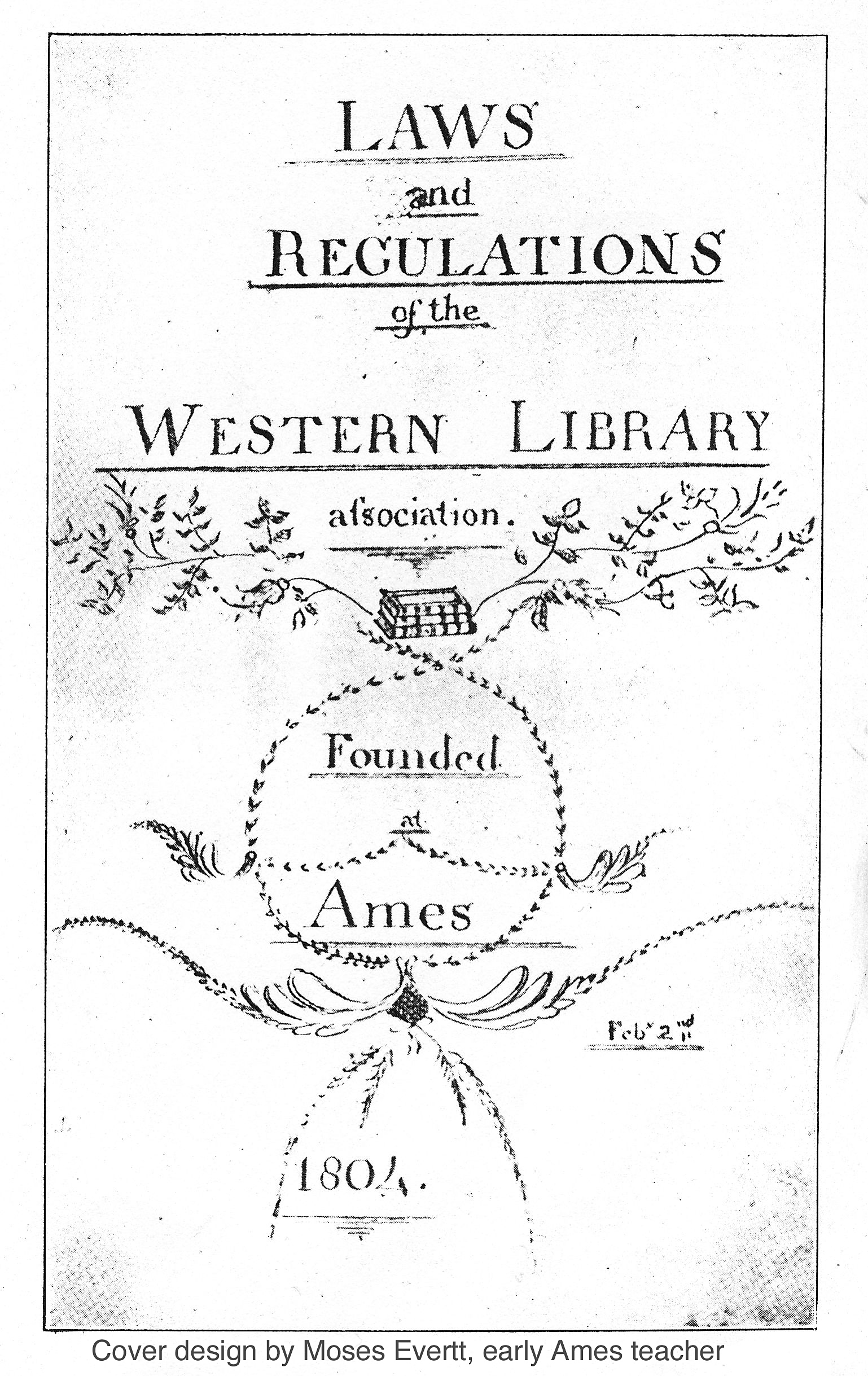 The side of the post office in Amesville hosts this short synopsis of the town's history, including the Coonskin Library and notable tidbit that the town was also a stop along the Underground Railroad. Photo by J Hazen on June 12, 2017. 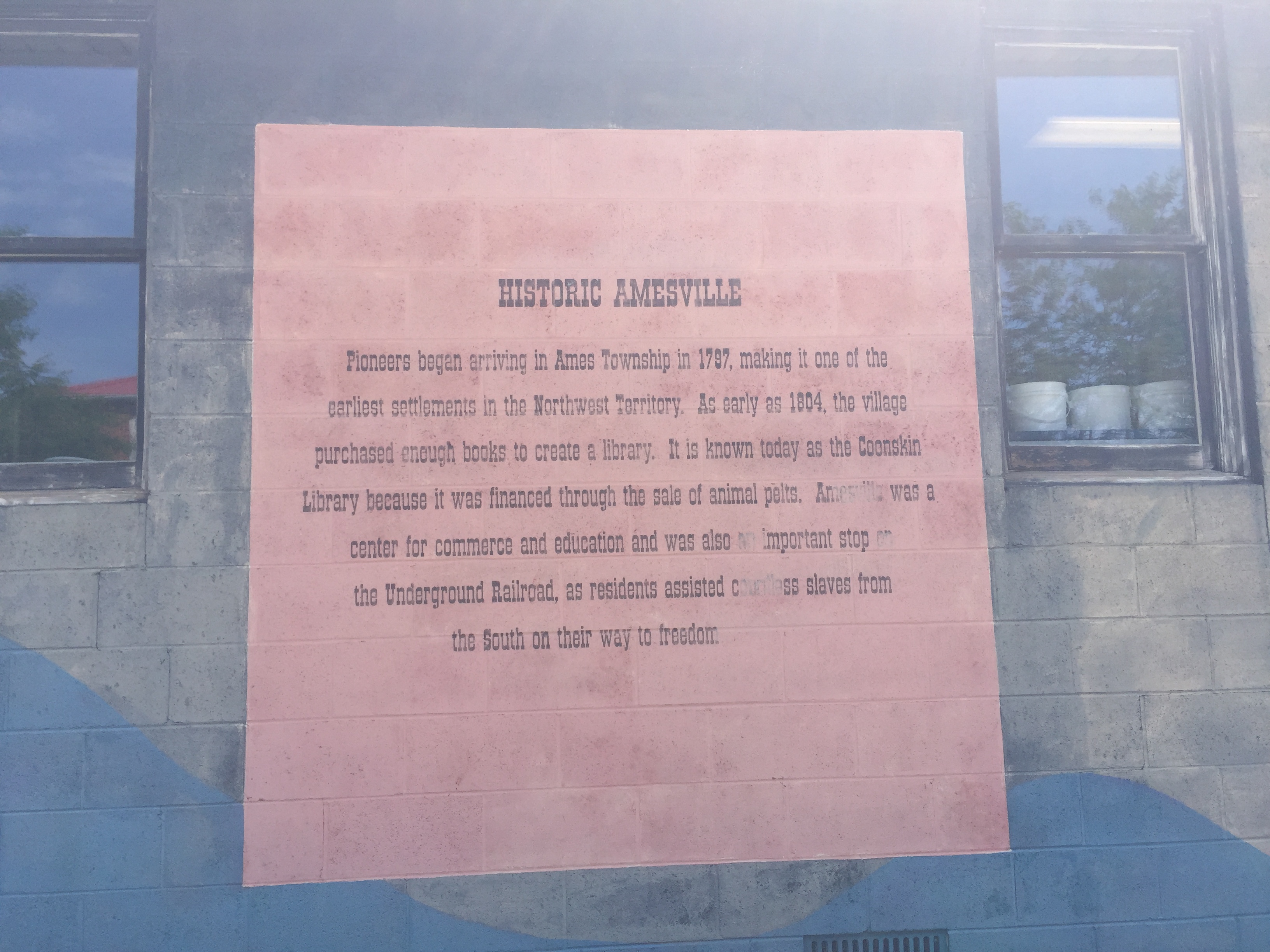 Ephraim Cutler's house still stands 218 years after it was built and is currently owned by Glen and Sue Hazen of Athens, Ohio. The property is known as Kickwheel Acres and is a family farm. Photo by J Hazen on June 12, 2017. 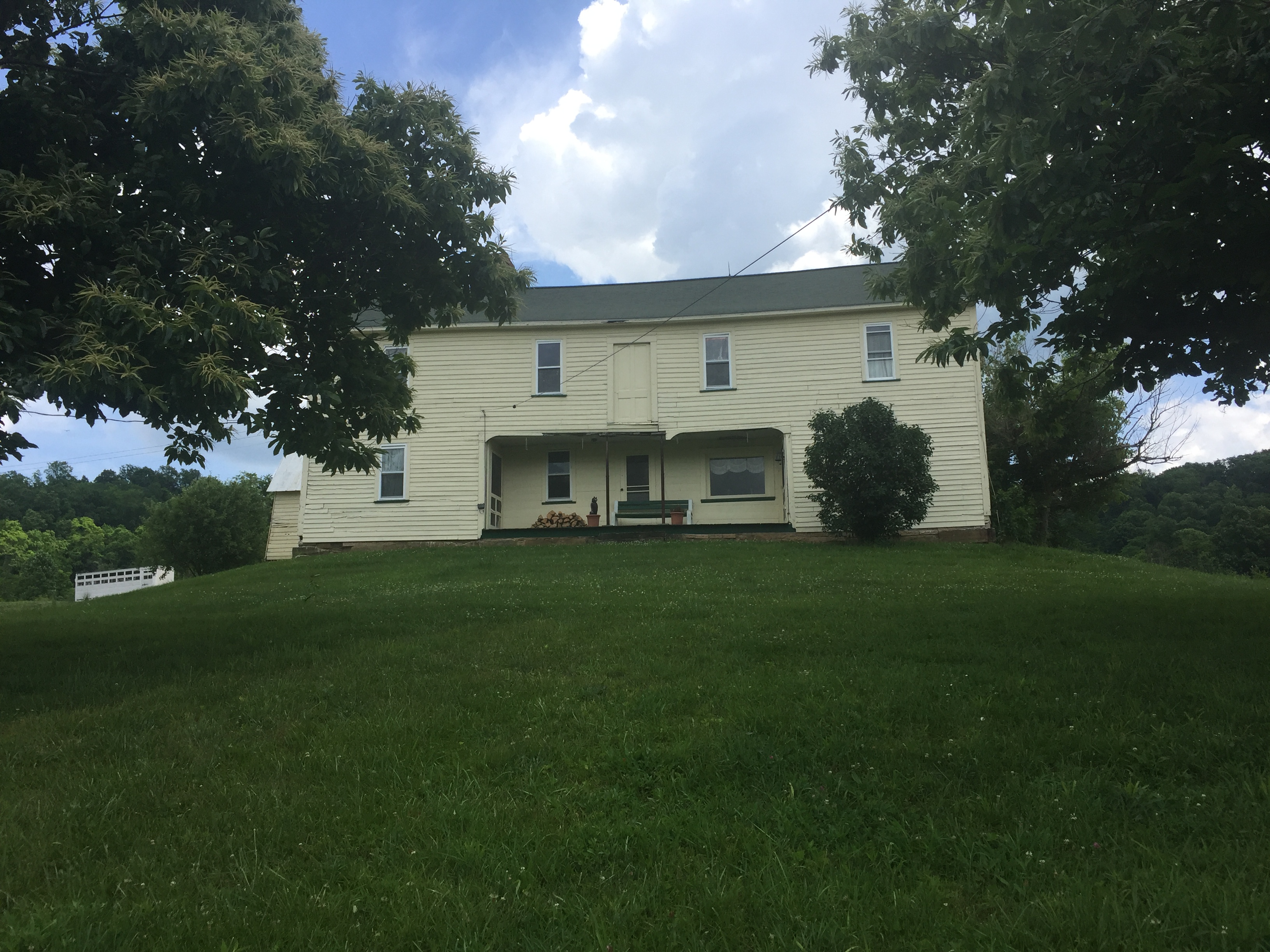 Located inside the museum, this is the route that Samuel Brown took to sell the pelts and buy library books in Boston. Photo by J Hazen on June 14, 2017. 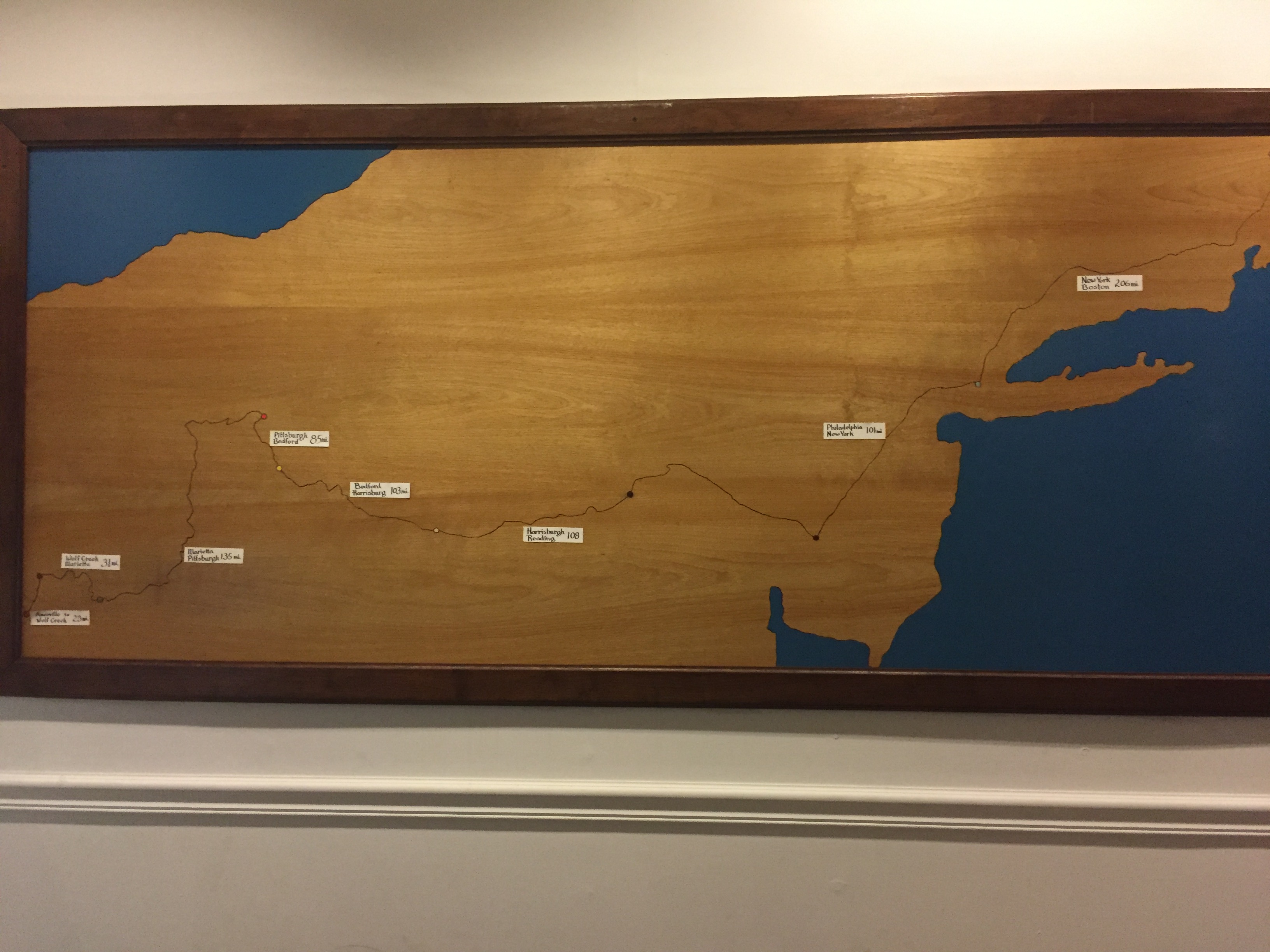 Along with the blurb above, the post office exterior also hosts a raccoon reading a book! Photo by J Hazen on June 12, 2017. 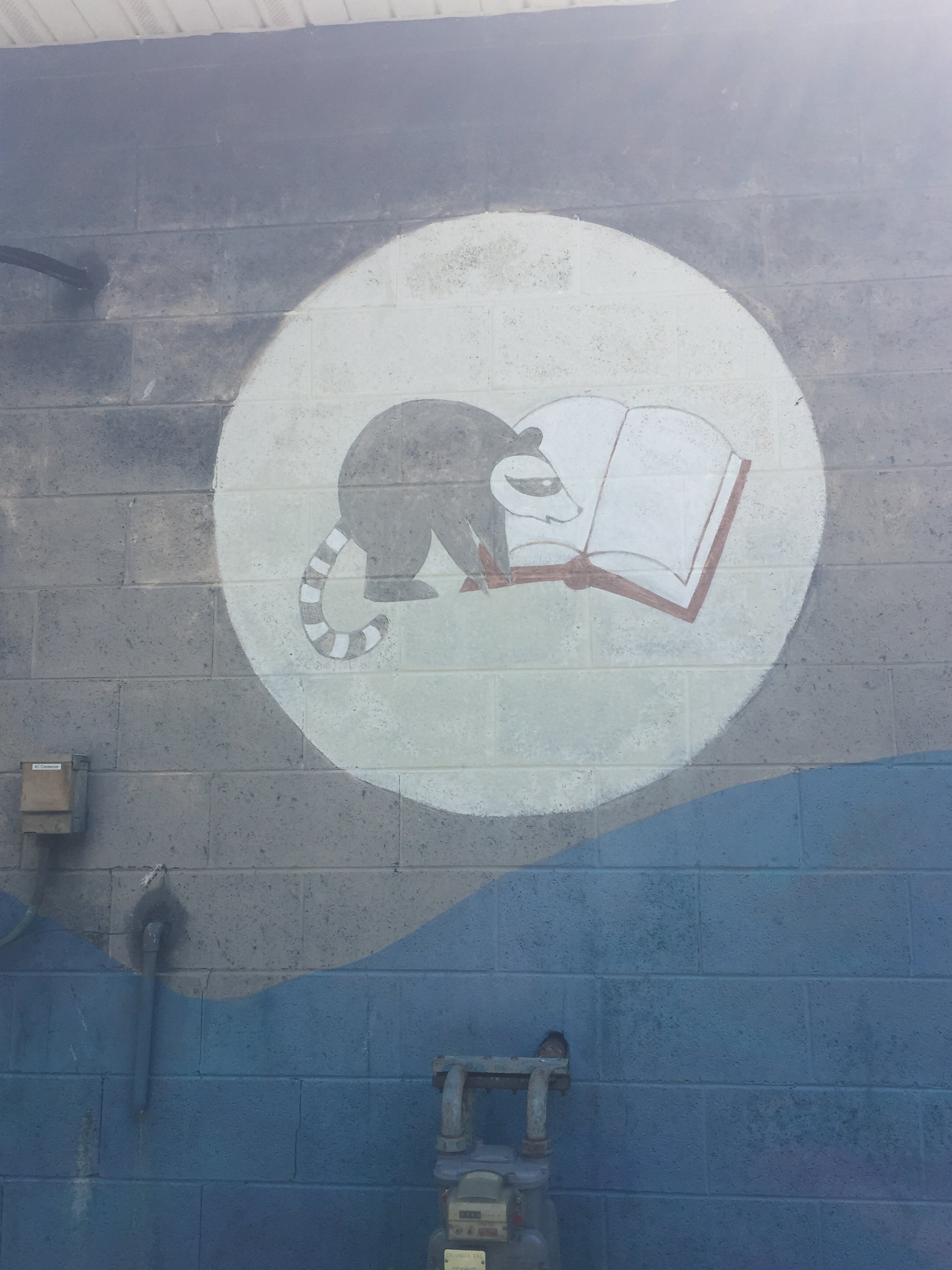 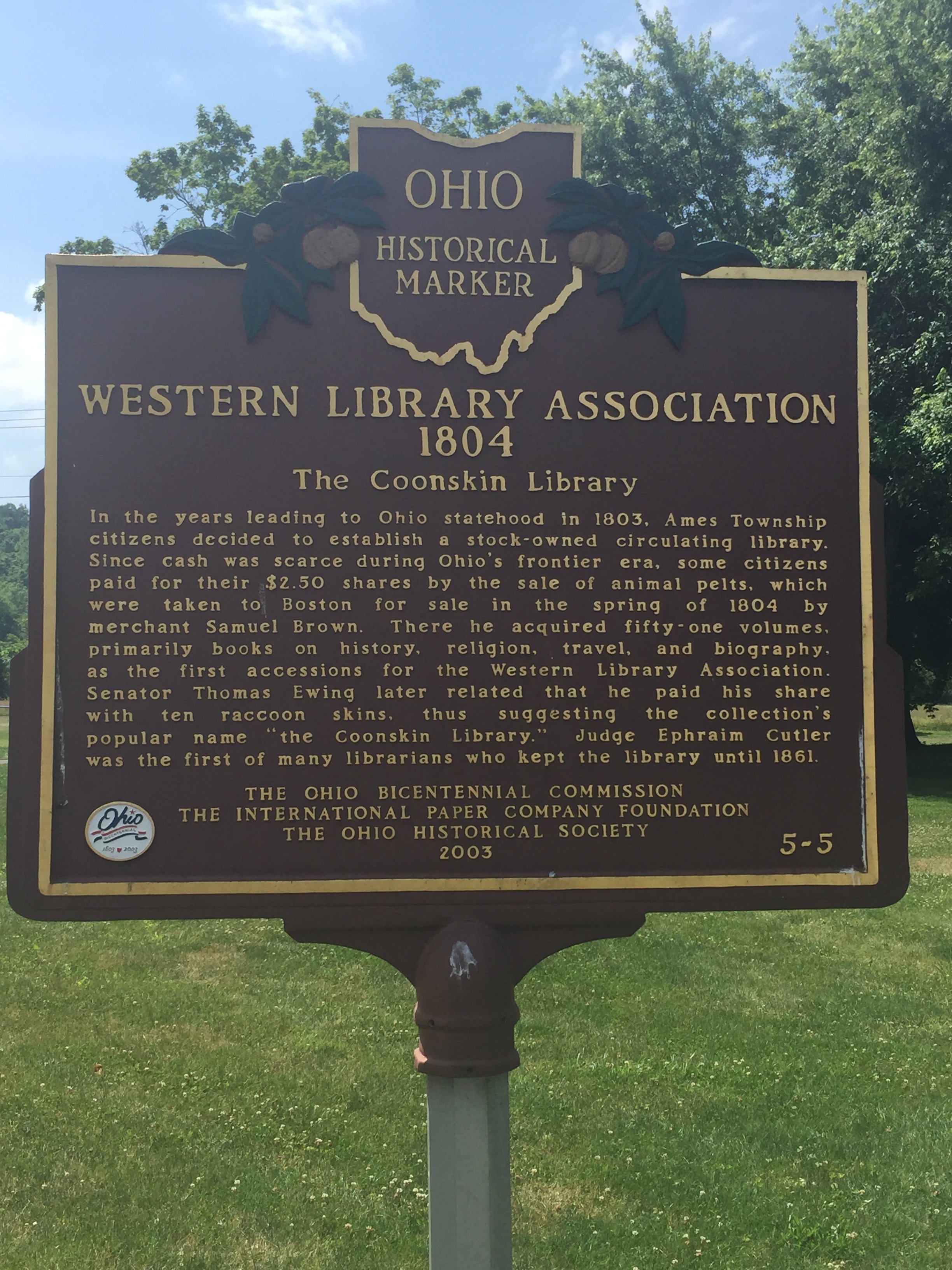 This is a copy of the original photo taken in 1930 of Ephraim Cutler's house, which housed the Coonskin Library in the first years of its opening, 1805-1806. Photo courtesy of Jim Dilley of Amesville, Ohio. 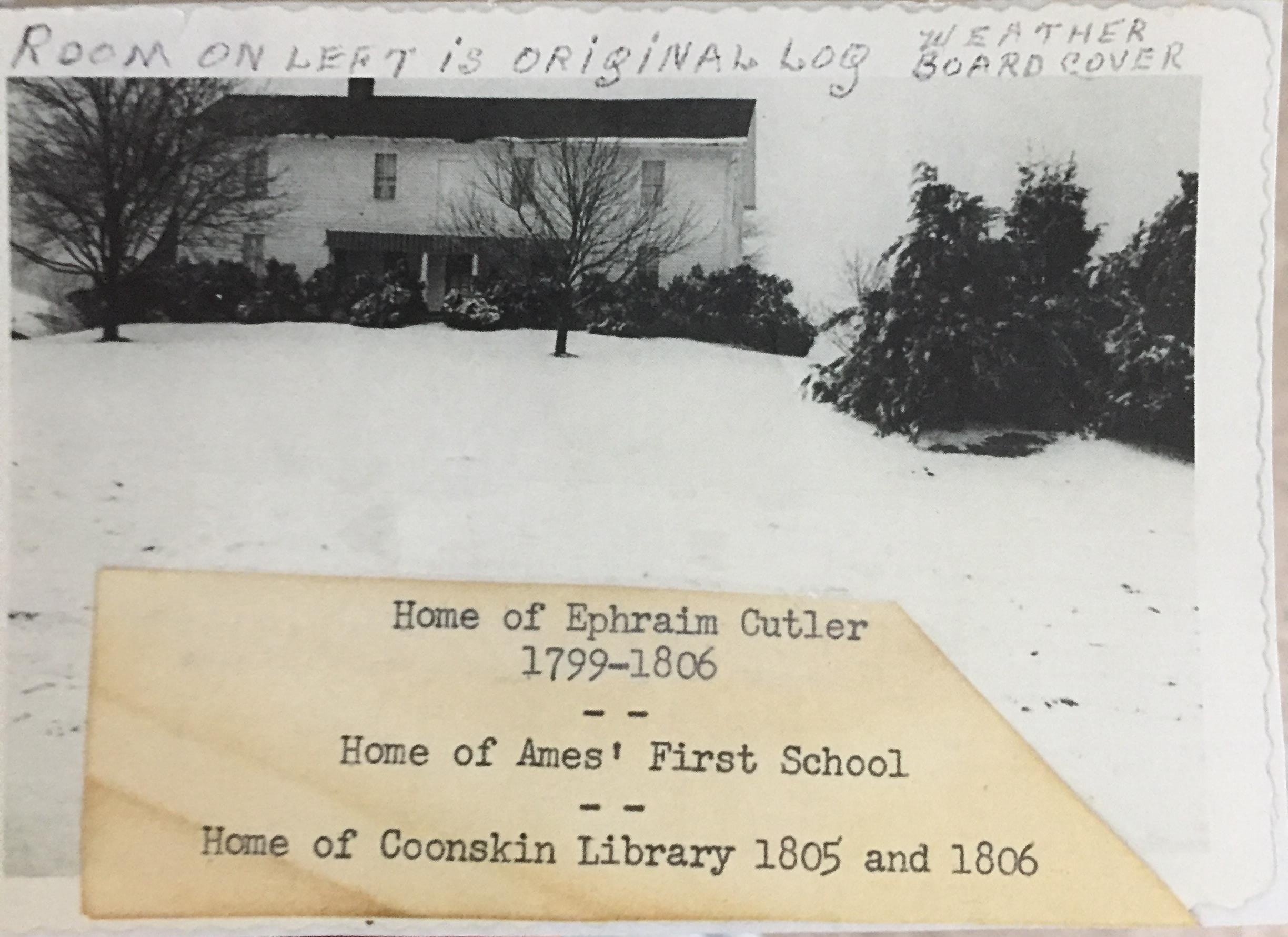 This is the Coonskin Library Museum. Located off State Rt 329, this museum is behind Amesville Elementary School and is mostly used to teach the students about local history. Contact the school to visit: 7404482501. Photo by J Hazen on June 14, 2017. 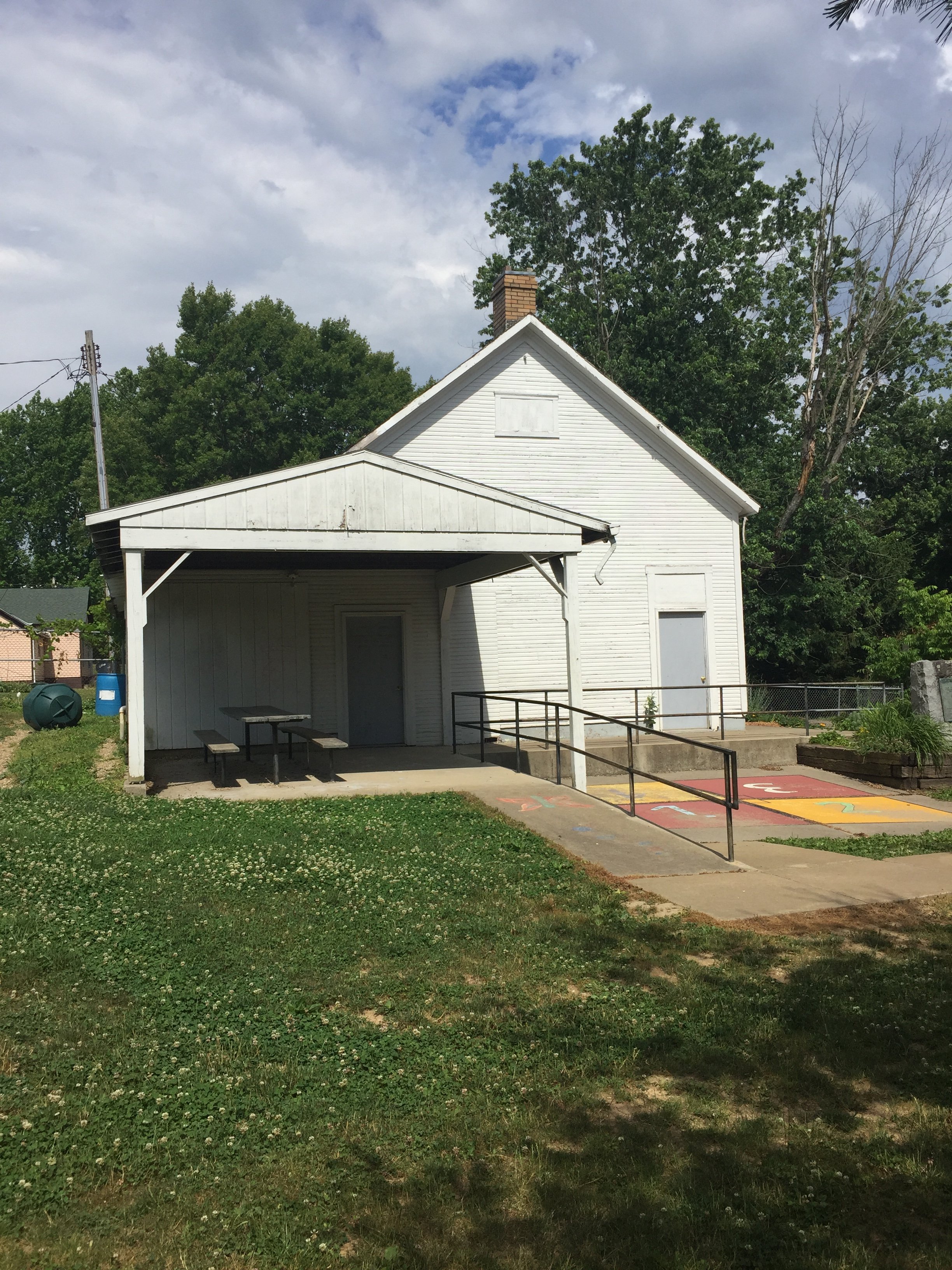 This is a marker placed outside of the museum by the Nabby Lee Ames Chapter of the Daughters of the American Revolution. Erected in 1925, this marker calls attention to Amesville as the site of the Coonskin Library. Photo by J Hazen on June 14, 2017. 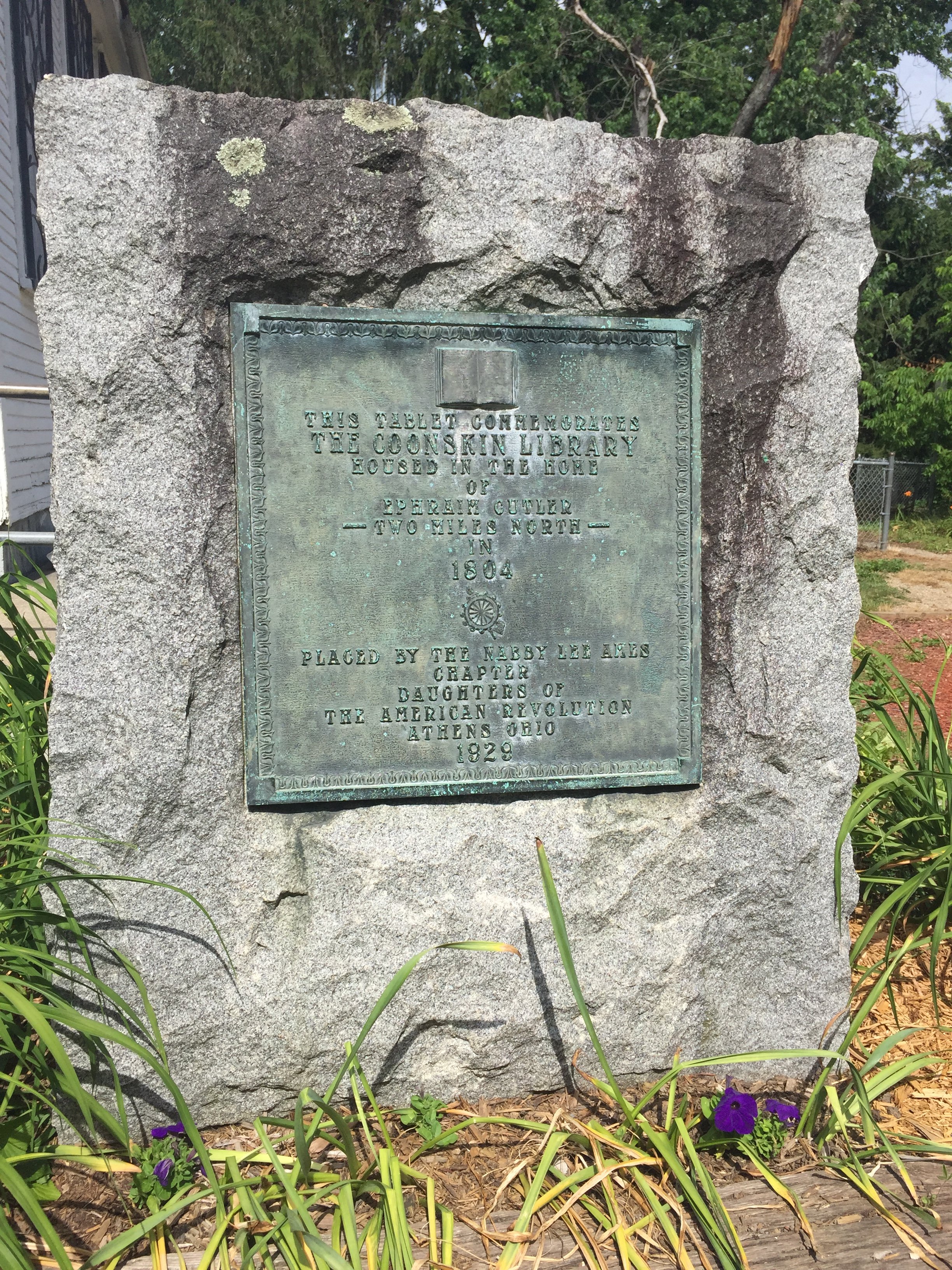 With the Ordinance of 1787, land in what is now Ohio was available for settlement, and many families started the trek westward to settle as pioneers. A clause of this ordinance was written by Manasseh Cutler, a U.S. Representative of Massachusetts and clergyman that helped the settlement of Ohio, who notes that "religion, morality, and knowledge being necessary to good government and the happiness of mankind, schools and the means of education shall forever be encouraged" in Ohio.[i] This clause becomes a guiding light to those in Ames Township after its settlement in 1779.[ii] Ames Township, now Amesville, is located in Athens County in the southeast portion of Ohio. According to the Coonskin Library Museum, Ames Township was named for Fisher Ames, a prominent legislator and orator who served for both of George Washington’s terms and was extremely influential in gaining approval for the sale of Ohioan lands to the Ohio Company; it is often said that Ames is the only township in Ohio that was named by an act of Congress.[iii]

The first settler in that area was Ephraim Cutler, son of Manasseh, and soon other families joined him, notably the Ewing and Brown families, among others. At the time of incorporation of Ames Township, there were about 161 people and soon grew even larger.[iv] According to Sara Cutler, a descendant of the prominent Cutler family, the pioneers did whatever they could to educate their children and keep themselves entertained during the long Ohioan winters and soon developed an "intellectual need" for more literature at the beginning of the 19th century.[v]

There were many obstacles facing the people of Ames and their desire to establish a library, but the biggest one was the lack of funding to buy books. Without easy access to any sort of commercial market, the pioneers made their goods from materials found around them or went without them.[vi] The suggestion to gather animal pelts to sell on the East Coast to fund a library came from Josiah True; this idea was both practical and feasible for the settlers, there were many raccoons, bears, and other animals in the area and their pelts would sell in the east.[vii] The idea was put into action by hunters and the next summer (1803) Samuel Brown traveled to Boston and sold the pelts for $73.50 and used that money to buy 51 volumes to bring back to Ames Township.[viii] When Brown arrived back to Ohio in 1804, the library opened on February 2nd of that year with Ephraim Cutler as its first librarian and his home being the first location of the library.[ix] The Coonskin Library never had a permanent home, and after leaving Ephraim Cutler’s in 1806 the library was moved from house to house in the town.[x]

Unlike libraries as we know them today, you could only use the Coonskin Library if you had bought a share in it, which excluded some in Ames Township from the books. The price in 1804 for one share was $2.50 and the member was charged an annual fee of 25 cents to keep the library updated; only 24 people could participate in the library the first year.[xi] The share price increased in 1819 to $4 and again in 1842 to $5.[xii]

The library thrived in its early years, by 1830 its collection had grown to nearly 250 volumes and membership was active until the middle of the nineteenth century, when interest began to wane.[xiii] The Western Library Association was open from 1804 until 1861 when the collection was sold by the librarian director.[xiv] The collection was eventually sold back to William P. Cutler, the son of Ephraim, who gave it to his daughter, Sarah Cutler.[xv] She donated the Ames Collection to Ohio Historical Society in Columbus where they are still held.[xvi] The Dover collection, which was an associate branch of the Western Library Association that opened in 1816, was donated to Ohio University and can be seen in the Archives of Alden Library on campus.[xvii]

This library is important for many different reasons, but mostly shows us how important literature was as the United States expanded west, specifically in Ohio. Although it was not the first library in Ohio (rather the third), the Coonskin Library encompasses the clause of 1787 that encouraged education and knowledge for a generation. In Amesville there is currently a museum dedicated to the Coonskin Library, but it is open only on request and is very small, it runs on donations and the original books are not housed there lack to a climate controlled facility but at the aforementioned places in Columbus and Athens.