Two miles upriver from where this marker is located was once an oil refinery co-owned by John D. Rockefeller, who would become one of the richest people in the world during the first decades of the 20th century. Though he lived in New York City he would often return to Cleveland, where he owned two houses. He and his wife are buried at Lake View Cemetery. Although Rockefeller was known for his aggressive business practices, later in life he was also a philanthropist, donating to charities and institutions in Cleveland and elsewhere.

The marker is located in Settler's Landing Park. 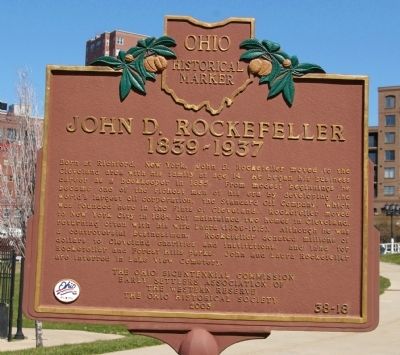 Born in New York in 1839, Rockefeller's family moved to Cleveland. After attending high school for a time, he left in 1855 to take a business course at Folsom Mercantile College (this became Chancellor University, which closed in 2015). Six weeks after finishing the course, Rockefeller got a job as a bookkeeper for a firm of commission merchants and produce shippers. In 1859 he began his own commission business with a partner. That same year the first oil well was dug in Pennsylvania and eventually Cleveland became an important oil refining center. Rockefeller and his partner established their refinery along with others in 1863. Two years later, he bought the business and formed a new company with one of the partners of the previous company, Samuel Andrews. In 1870, the two men, as well as Rockefeller's brother William and others, founded Standard Oil. The company gradually acquired other companies, using tactics such as demanding shipping rebates and underselling competitors. In these ways Standard Oil became the country's first business trust empire.