This marker indicates the location of Ohio's largest Civil War army training camp, Camp Cleveland, which was established in July 1862 and was thirty-five acres in size. It was bounded by what is now 7th, 5th, and Marquardt Streets and was part of a property belonging to the Wade family. It was a very good location back then, as it was flat (which was good for training) and had access to plenty of water. It also, as it does now, affords a great view of the city. In all, more than 15,000 soldiers were trained here, amounting to about 5% of Ohio's total number of enlisted troops (over 300,000). Since the camp had plenty of housing, it was also a place where Union troops could stay as they traveled elsewhere. Confederate prisoners were held here, too. A Union hospital was constructed here as well, helping over 3,000 troops recover from battle wounds, disease, and illness. Nothing of the camp remains today; the buildings were dismantled and the wood sold at auction.

The marker is just up the block from 7th Street, the western boundary of the camp. 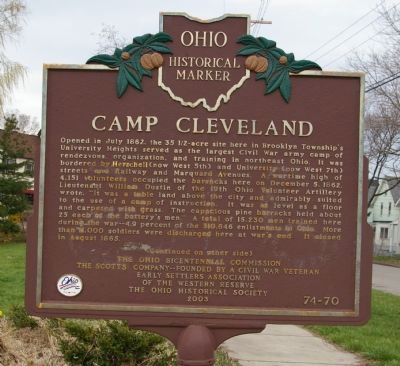 There were a total of seven Civil War camps in Cleveland. This camp and Camp Wade were in Tremont. The other five camps (Camp Taylor, Camp Wood, Camp Brown, Camp Cuyahoga, and Camp Tod) were near present-day Woodland Avenue from about 22nd to 55th streets. Ohio regiments trained at these camps before heading to active service in defense of the Union.