“Sinners in the Hands of an Angry God” Marker

This historical marker commemorates Jonathan Edwards' famous sermon, "Sinner in the Hands of an Angry God," delivered in Enfield, Connecticut in July 1741. The marker lies in the grounds of Enfield's Montessori school (close to the Paul Robeson House).

Image of the marker 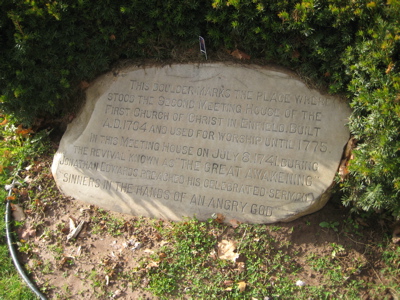 A 1929 oil portrait of Jonathan Edwards by John Potter Cuyler 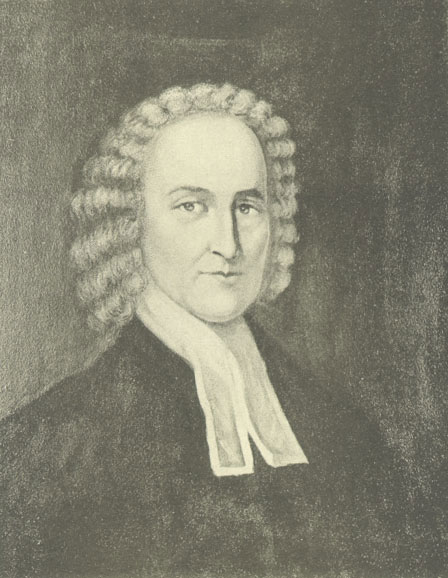 This boulder marks the place where stood the Second Meeting House of the First Church of Christ in Enfield, built A.D. 1704 and used for worship until 1775. In this Meeting House on July 8, 1741, during the revival known as "The Great Awakening" Jonathan Edwards preached his celebrated sermon, "Sinners in the Hands of an Angry God."

Edwards' sermon is famous for its strong language:

The God that holds you over the pit of hell, much as one holds a spider, or some loathsome insect, over the fire, abhors you, and is dreadfully provoked; his wrath towards you burns like fire; he looks upon you as worthy of nothing else, but to be cast into the fire; he is of purer eyes than to bear to have you in his sight; you are ten thousand times so abominable in his eyes as the most hateful venomous serpent is in ours. You have offended him infinitely more than ever a stubborn rebel did his prince: and yet ’tis nothing but his hand that holds you from falling into the fire every moment: ‘Tis to be ascribed to nothing else, that you did not go to hell the last night; that you was suffer’d to awake again in this world, after you closed your eyes to sleep: and there is no other reason to be given why you have not dropped into hell since you arose in the morning, but that God’s hand has held you up: There is no other reason to be given why you han’t gone to hell since you have sat here in the house of God, provoking his pure eyes by your sinful wicked manner of attending his solemn worship: Yea, there is nothing else that is to be given as a reason why you don’t this very moment drop down into hell. [link to the full text below]

Zakai, Avihu. Jonathan Edwards's Philosophy of History: The Reenchantment of the World in the Age of Enlightenment. Princeton: Princeton University Press, 2003.