The Woodstock Depot, built in 1912, is among some of the oldest buildings in historic downtown Woodstock, and is a local icon for the citizens. It presently sits in the heart of the recently revitalized downtown Woodstock area and currently serves the community as a popular restaurant known as Freight Kitchen and Tap. The single story, red clay structure lies directly next to Main Street and across from a wide array of shops and stores that still help stimulate the local economy today. 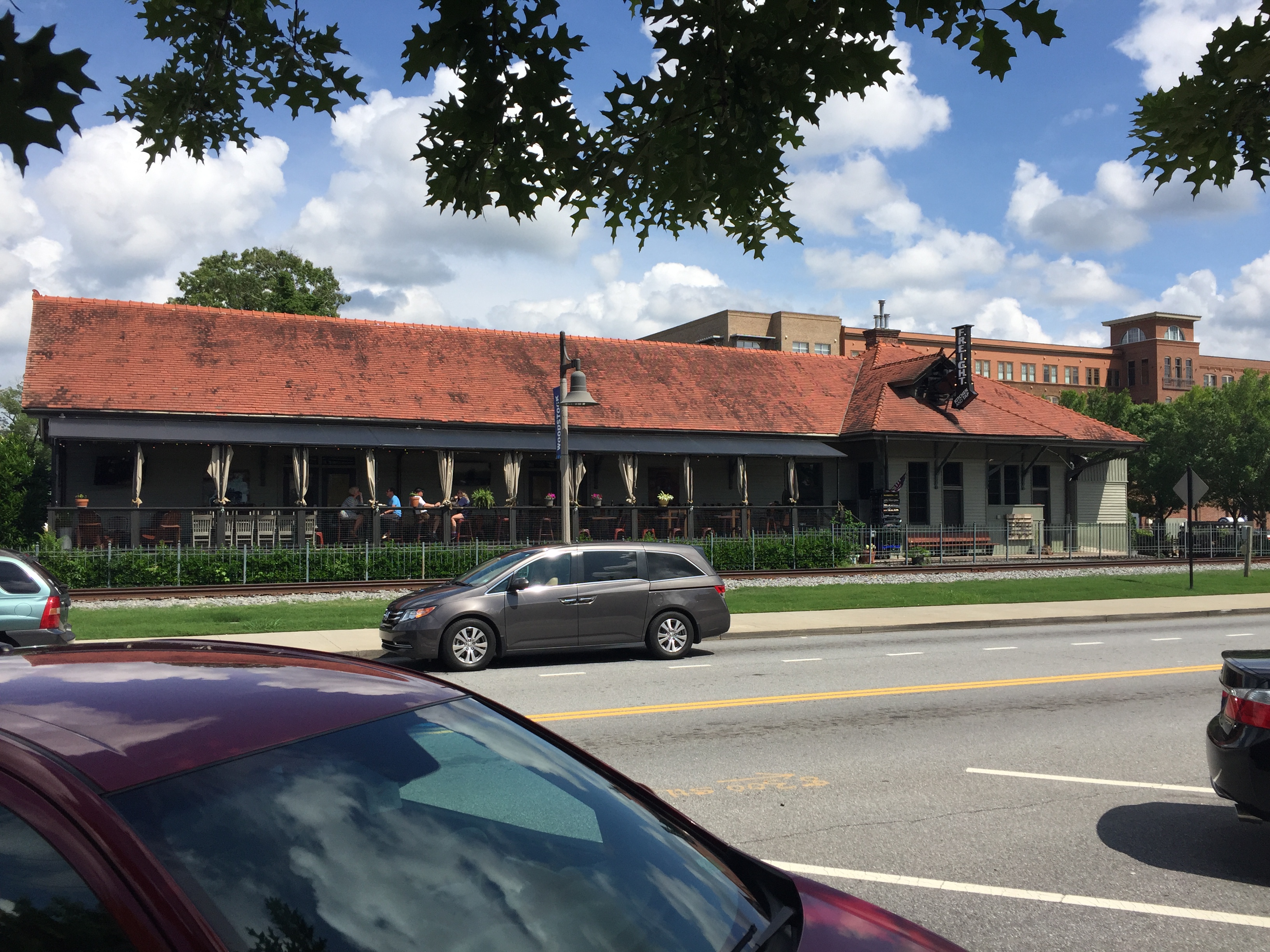 A view of the tracks. 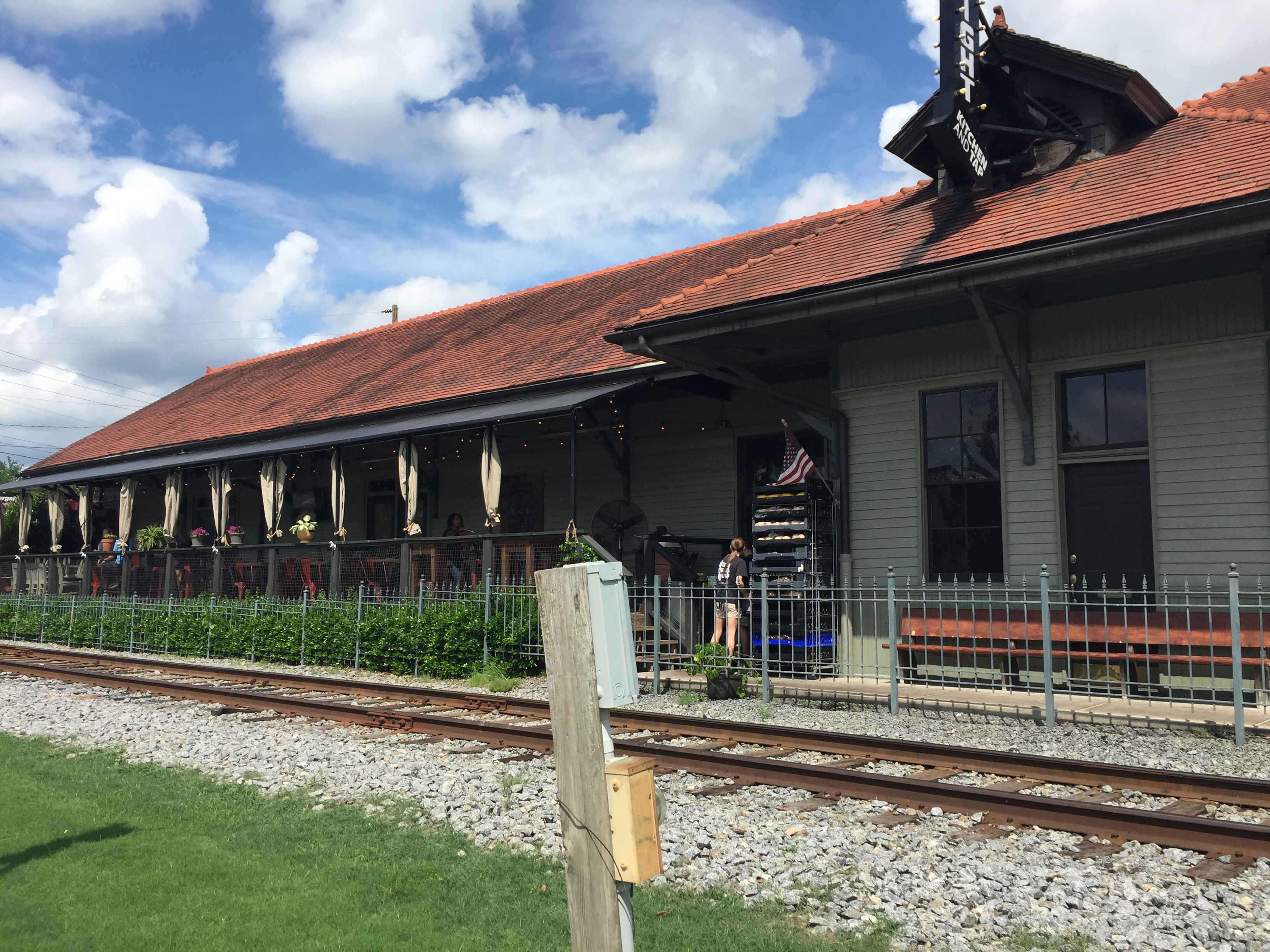 A side view of the building. 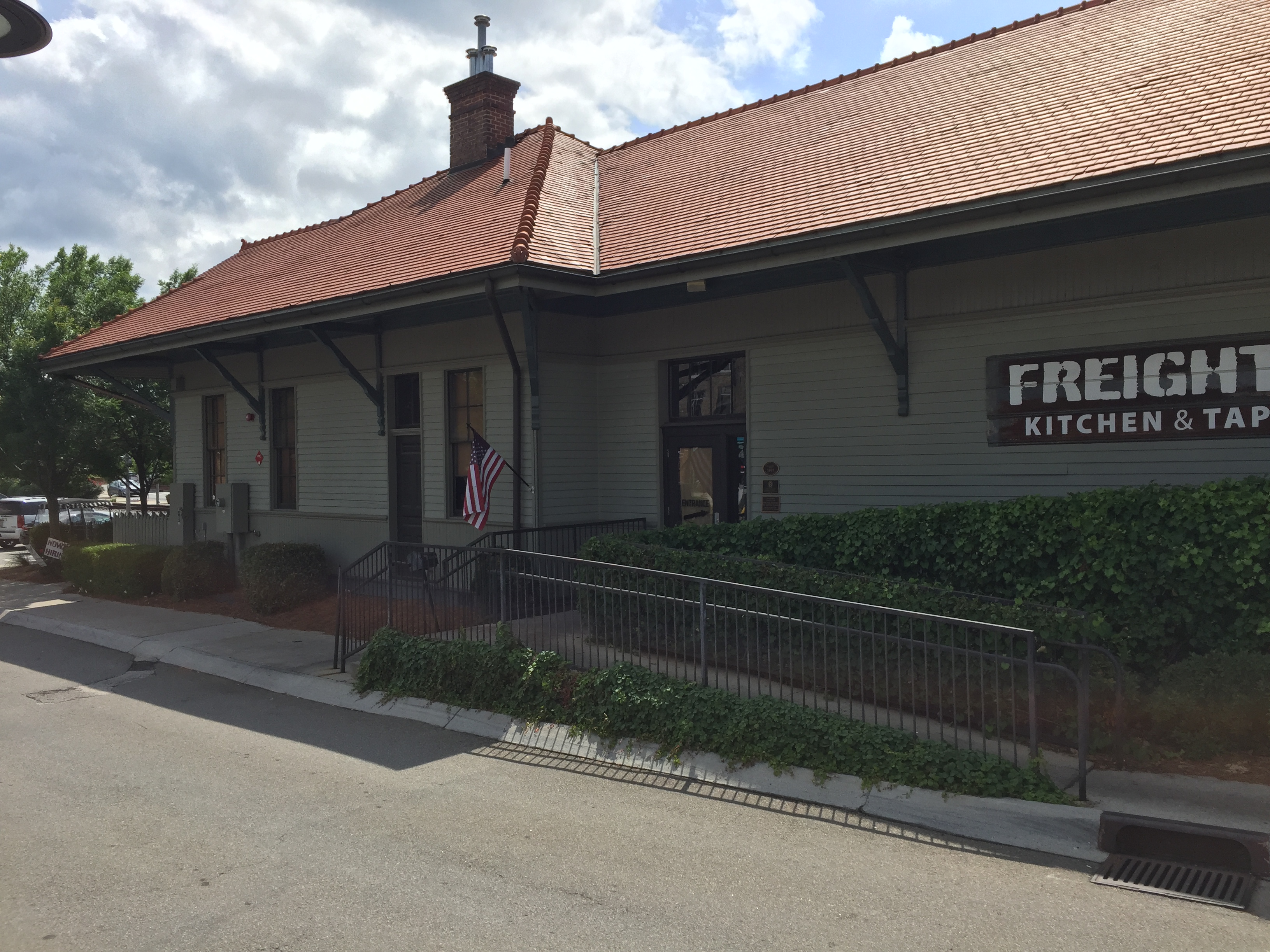 The Old Woodstock Depot. Around Woodstock. (October 10, 2011. Accessed May 19, 2017. http://aroundwoodstockmagazine.com/the-history-of-woodstock-georgia/) 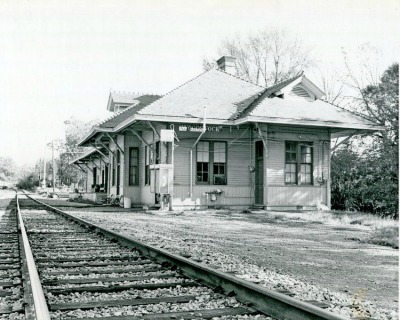 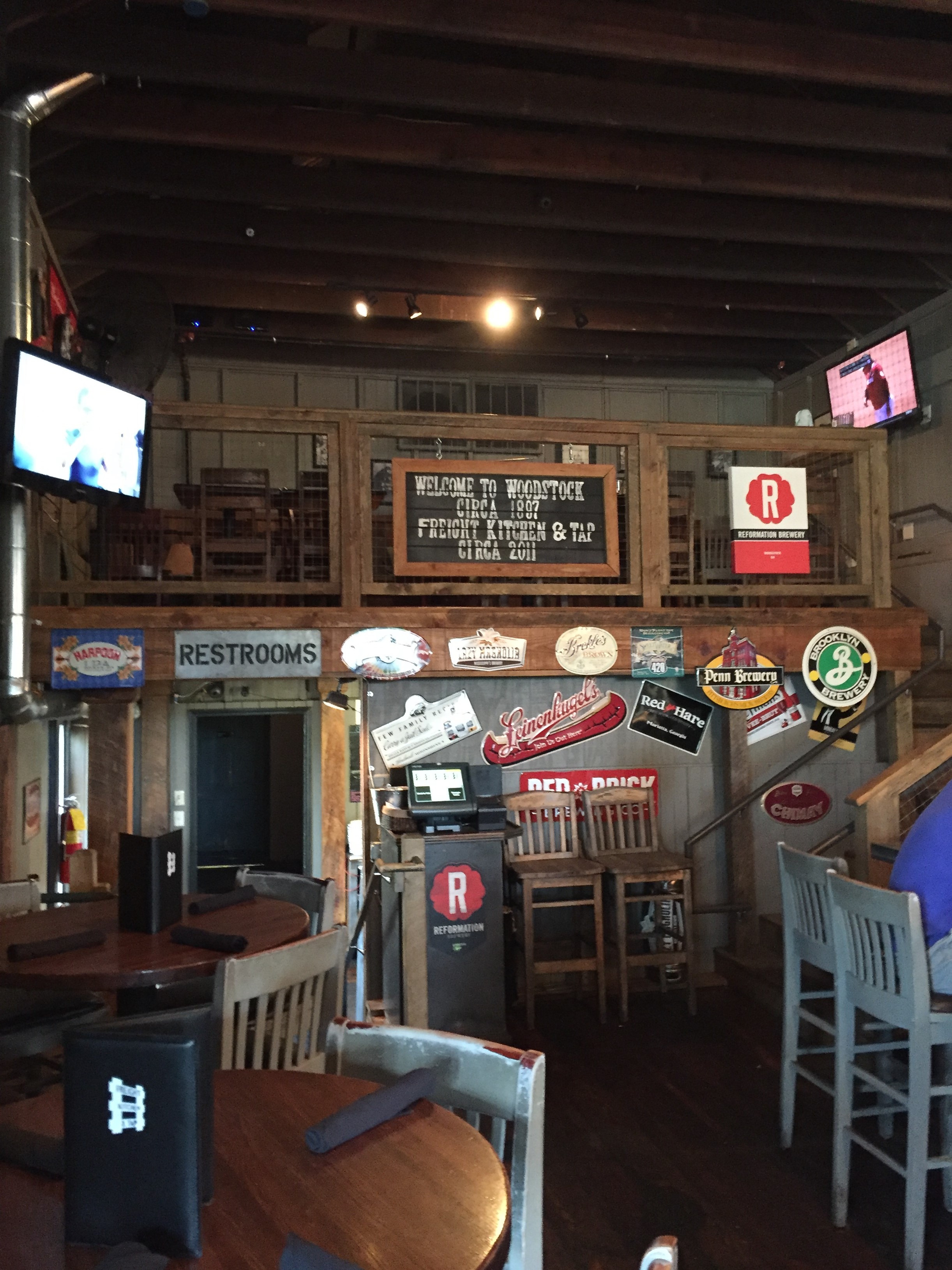 Original sign with actual pricing of rail line tickets for the time. 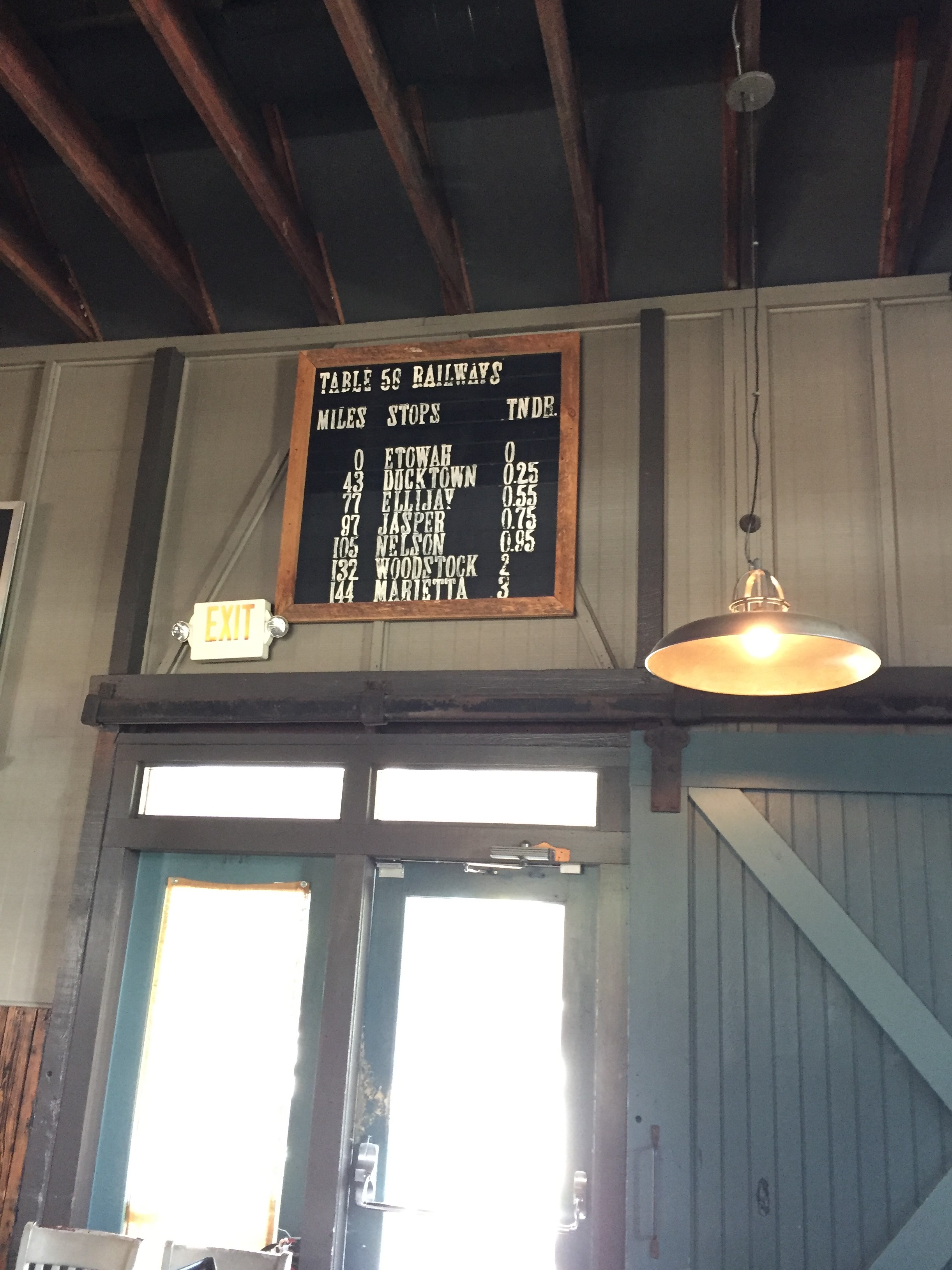 The first rail line to come through Woodstock was the Marietta and North Georgia Railroad, which was completed in 1879. Originally, a previous depot is believed to have been built in the same year, but the first written account of it is not made until 1897 as a stopping point between Marietta and Canton.  During this time, Woodstock was well-developed, but incorporated, relying mostly on agricultural means as a way to sustain life and commerce. Cotton was a prime agricultural product in the area and heavily manufactured by the local Rope Mill that supplied cotton ropes that were used for plow lines or well-water buckets. In the 1890s, it is said that Woodstock was shipping out 2,000 bales of cotton yearly, much larger than other neighboring towns of similar size.

Later in 1905, the Marietta and North Georgia Railroad was purchased by the Louisville and Nashville Railroad and the current Woodstock Depot that stands today was built in 1912 to serve as a passenger and freight depot. Once completed, the depot was divided into areas for freight and passengers, among which were also separate entrances and waiting rooms for Blacks and whites. Many passengers were also commuter students going between Marietta and Canton for school.

Development of downtown Woodstock also began to occur in this period and started to include modern tools of infrastructure, such as the installation of the first street lights in 1925, and the concrete paving of Main Street in 1929. During the 1930s and 1940s, as local cotton production began to decline due to modern industrialization, the poultry market rapidly increased in the area and allowed many to still thrive in the region, as well as keeping the depot active. Passenger services were cancelled, however, in 1949 and a full developed telegraph service was available until the 1950s.

The depot is now known as the Freight Kitchen and Tap restaurant and is renowned for its locally crafted beers and traditional southern charm and food. The restaurant has become extremely popular amongst the local crowd, and business has dramatically grown due to recent revitalization efforts directed towards the downtown Woodstock area. The rail line, which it still resides next to, is owned by the Georgia Northeastern Railroad Company and the depot is owned by the City of Woodstock; the land is leased to the city from the railroad.