The Duke Mansion is one of the largest and most striking homes in Charlotte. As its name indicates, it was once the home of tobacco magnate James Buchanan "Buck" Duke. The home is listed on the National Register of Historic Places. 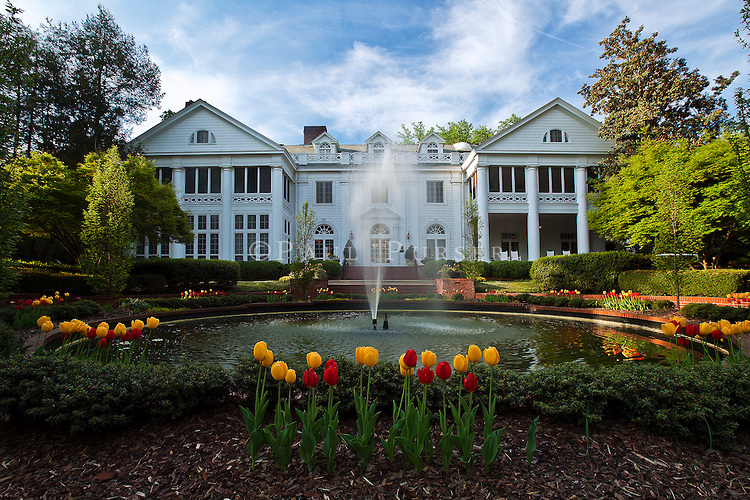 he home known as the Duke Mansion was actually built by someone else. In 1915, Zeb Taylor built the home in what was then the relatively new Myers Park neighborhood. Taylor lived in the home for four years, until it was purchased by James Buchanan "Buck" Duke in 1919.

Buck Duke, already a very wealthy man, bought the home and tripled its size. His additions gave the home its distinctive "H" shape, and gave the home a total of 45 rooms, including 12 bathrooms. Duke had the "Miracle Fountain" added as well, a feature which shoots water piped from the Catawba River 150 feet into the air. Duke reportedly added the fountain to charm his only child, Doris.

It was in the Duke Mansion's solarium that Buck Duke began to envision an endowment in his family's name which would fund educational institutions. The Duke Endowment invests more than $100 million annually in various philanthropies.

Following Buck Duke's death in 1925, the mansion had numerous owners. C.C. Coddington, the owner of a local car dealership, bought the home in 1926. In 1929, the home was purchased by Martin L. Cannon, who named the mansion White Oaks. Cannon's daughter, Frances Ann, was an early romantic interest of the young John Kennedy, and he was in attendance at Frances's wedding, which was held at the mansion.

After changing owners a few more times, the Duke Mansion was added local, state, and national register of historic places in 1977. The home was privately owned until 1996 when Duke Power Company created a nonprofit in order to protect the mansion. It opened as a Historic Inn and Meeting Place in 1998.