This seven-story church, colloquially known as the "Cement Tent" or "St. Cement," opened in 1971. The design was selected by the church leaders, although some had members and local residents concerns about the design and functionality of the massive cement structure. The structure was declared unsafe and closed in 1997. Between 1997 and 2017, congregants met at the parish hall which was located next to church structure. In 2017, Sacred Heart parish merged with Rockville's St. Bernard congregation. Demolition of the iconic cement church began in the spring of 2019.

Sacred Heart Church was known colloquially as "the concrete tent" and closed in 1997 due to spalling. 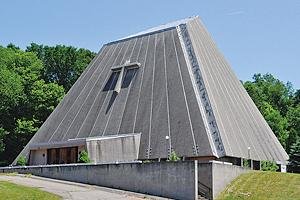 Problems began for the church in 1980, when a few chunks of concrete became separating from the building's walls and falling into the pews below. The degradation was part of a process called "spalling" which involves the movement of concrete due to environmental factors such as moisture and temperature changes. The spalling resulted in concrete slabs rubbing against each other and crumbling. Repairs were made but the process of completely fixing the building was deemed too expensive and the congregation instead began meeting in the parish hall for safety.