Lake Acworth Beach and Bathhouse is a historic recreational facility built in 1953. Located in Cauble Park, it is historically significant in three areas—architecture, recreation, and social history. In terms of architecture, the bathhouse is an excellent example of Colonial Revival style designed in a rectangle shape with a low roof supported by columns. The colonnade is reminiscent of pre-Civil War architecture in the South and the low roof reflects the adoption of modern architecture. As for recreation, the bathhouse represents the post-WWII period in which such facilities provided a place for people, especially city residents, to relax and enjoy the outdoors. The bathhouse, then, added to the cultural and recreational opportunities within Acworth, becoming a place of retreat for locals and residents of Atlanta during hot summer months. Lastly, the bathhouse is important in social history because it was for whites only during its early years and as such reflects the era of segregation in the southern United States. The bathhouse was added to the National Register of Historic Places in 2010. 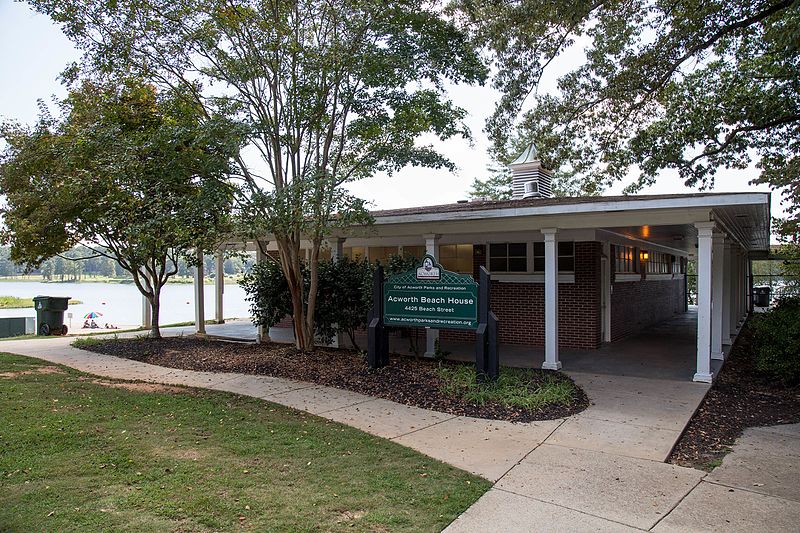 In 1949, the U.S. Army Corps of Engineers created Allatoona Lake, which is located to the north of Lake Acworth, to control flooding and build a hydropower dams. However, the water level fluctuated significantly. When it was low, there was little water around Acworth, creating a mudflat to the east of the town where Proctor Creek reaches the lake. To remedy this situation, the Corps built another dam to create Lake Acworth.

Unsurprisingly, Lake Allatoona and Lake Acworth attracted people from around the region seeking opportunities for recreation. To accommodate this influx of visitors, Acworth (and other communities along the lakes) invested in recreational infrastructure, including the bathhouse. It contributed to the town's goal of changing its image from a rural community to a recreational hub. The bathhouse consists of restrooms, showers and changing areas for both men and women. In 1962, a social hall was built for families and the community to rent the space for recreational as well as entertainment purposes. There are also three pavilions, picnic areas, and barbeque pits.

As mentioned above, the park only allowed white visitors; Blacks had to go another place called George Washington Carver Park (named after the famous 20th-century agricultural scientist), which was located in Bartow County and created in 1950. It was the only park in dedicated for Blacks in the state. Like Cauble Park, it had amenities including a boat ramp, beach, and a clubhouse. It drew visitors from around the region and even attracted notable musicians such as Ray Charles and Little Richard. Sometime after desegregation in the 1960s, the Corps of Engineers reacquired the property and the park closed.